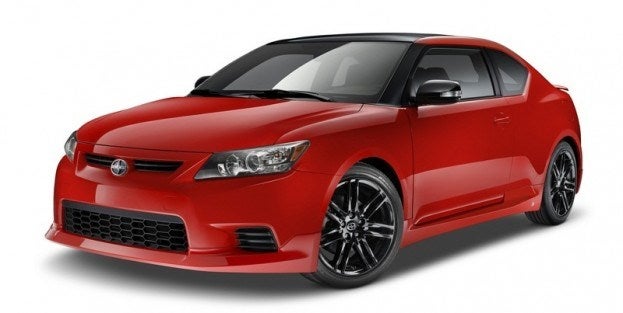 So what can you expect in the RS 8.0? A slightly quieter paint scheme called “Absolutely Red” (in case you were concerned as to how red it actually was,) along with gloss black side mirrors and just as black 18-inch alloys to match. You’ll also stand out with a new five-piece body kit that includes front and rear lower valences, side skirts and a rear spoiler. Inside, you’ll find it a bit more subtle than previous RS models, too. Red stitching lines the steering wheel and cloth black sport seats, and the usual numbered plaques are all you’ll notice that’s changed from the regular tC. Unless you opt for the $1,050 6-speed automatic, then you’ll also get some paddle shifters.

TRD had a small hand in the 2013 Scion tC RS 8.0 as well, lowering it a tad and swapping out the exhaust with their own version that pops out the center of the rear valance.

So, while it may seem that Scion is being a bit lazy this year, I think it’s a worthwhile choice if you like what’s on offer. It’ll make your tC stand out, hopefully increase resale value (only 2000 are being made,) and save you from doing some of the work yourself. It’s not extreme, but a lot of people prefer something a bit more subtle than the “High Voltage Yellow” of last year’s.

The tC RS 8.0 starts at $22,545 including delivery and will be on sale later this month. Do you wish they would have gone a little crazier with this one, or do you like the more subtle changes?

Check out the video below and the photo gallery with many more images below that.