When I first found out my next test vehicle was a 2012 Suzuki Grand Vitara Ultimate Adventure Edition, I have to admit that my pulse did not quicken.  With a chassis and a powertrain that are a little long in the tooth, and with some seriously stiff competition that recently entered the market, it was not at the top of my list.  After spending a week with it, however, I found it to be quite capable in most respects. 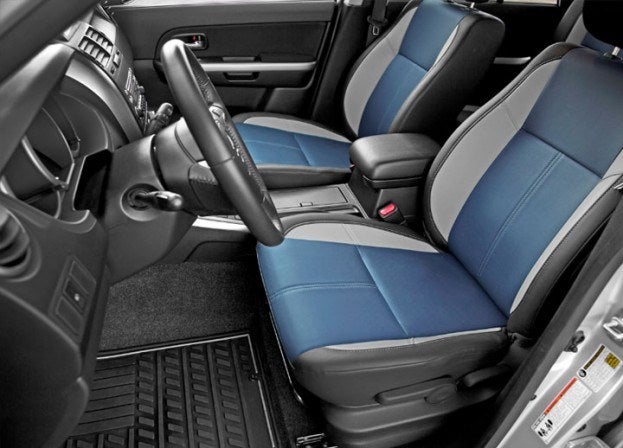 The Grand Vitara starts at $19,649 for the base model with RWD and a manual trans. You get power windows and locks, air conditioning and even navigation standard at that price. The Ultimate Adventure Edition adds heated, water-resistant front seats, leather wrapped steering wheel, 18-inch smoked alloy wheels, fog lamps, and integrated turn signals on the side-view mirrors.  My tester also had full-time 4-wheel drive, audio and cruise controls on the steering wheel, auto-climate control, all-weather floor mats and cargo mat, Bluetooth, and a first aid kit and Garmin navigation for a total of $24,569. The two things that were surprisingly missing from the Grand Vitara for my adventurous expectations were a roof-rack and a sunroof. The exterior is ruggedly handsome.  The interior is a surprise given the rugged exterior with soft touch materials on the doors and most surfaces you come in contact with. The doors close with a solid thud.  I thought the steering wheel was one of the best I’ve felt.  It’s soft and chunky and feels just right.  The front seats, once adjusted to my liking, were comfortable for my hour long commute, and felt like they still would be an additional hour or two.  My 5’ 5” wife felt that the headrests were a little too far forward and put her head in an awkward position so she was not a fan of the seats.  Front seat room is good and rear seat room was acceptable for the class.  Cargo room was a little on the short side although could be expanded vertically without the rear cargo cover in place or by folding the rear seats. The Suzuki Grand Vitara’s powertrain is a 166 hp four-cylinder engine paired with a four-speed automatic. It initially accelerates fine, but feels like it runs out of power after first gear.  The engine would probably perform better if it had a more efficient transmission. There isn’t a  trade-off of good gas mileage either as its EPA rating of 19 city/23 highway is below class average.  The highway mileage increases to 26 MPG on RWD models. When driving the Grand Vitara, I felt it had a high seating position with great sightlines and it didn’t take long to feel at ease behind the wheel.  The engine provided decent power in city driving, but the transmission seemed slow on downshifts when I wanted to pass on the highway.  I strangely found myself wishing for the Kizashi’s CVT.  Wind noise levels were surprisingly quiet at highway speeds, but the road noise from the aggressively-treaded Dunlop Grandtrek tires made its way into the cabin.  The ride was well controlled and not as stiff as I expected.  I wasn’t able to sample the Garmin navigation system that mounts in a flip-up compartment on top of the dash.  As soon as I snapped it into place, it produced a buzzing sound in the stereo speakers.  I didn’t bother with it after that. 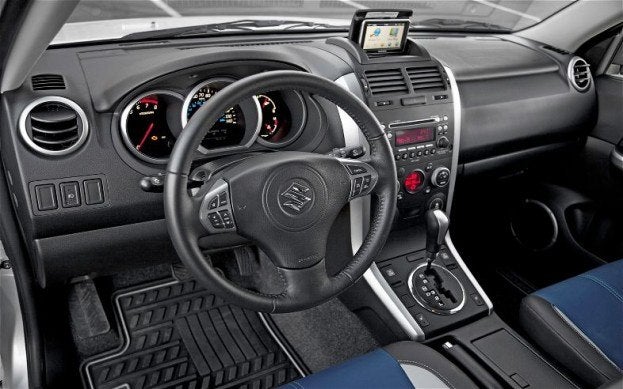 Overall, the Suzuki Grand Vitara Ultimate Adventure Edition is a pretty attractive package with good value in the equipment it provides.  For comparison, I speced out a Kia Sportage with the same equipment and it was $2,000 higher.   While it isn’t as impressive as the Kizashi, I still feel it is similarly under-appreciated.

The transmission hampers what could be a much better experience.  Too bad the five-speed manual isn’t optional on all trim levels.  If you want one of the few off-road capable compact SUV’s out there, the Suzuki fits that bill.  You have to spec out the Limited model which is the only trim level with 4-Lo. You can build and configure your own model here.