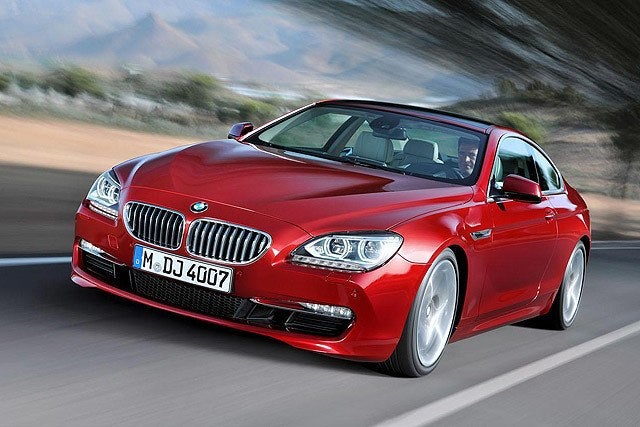 For 2012, the BMW 650i has been completely updated. Now in its third generation, the 6-Series has been fully redesigned by Nader Faghihzadeh and is longer and wider and has a more aggressive look than the previous generation 6-Series. The front end features a new shark-nose look with LED foglights that add to the new low-slung appearance.

The larger dimensions on the new 6-Series are attributed to new aluminum front and rear subframes that BMW says are 50 percent stiffer than its predecessor. They are also used to reduce weight in the heavy car. The 650i Coupe is a hefty car and weighs in at 4233 pounds. In order to reduce weight further, BMW used lightweight seats with integral seat belts, aluminum doors, hood and front spring mounts, and reinforced composite front side panels and trunk lid on the new 6-Series. To get the big car moving, the 650i gets a more powerful new twin-turbocharged direct-injection 4.4-liter V8 engine for 2012. BMW’s twin-turbocharged engine produces 400 horsepower and 450 lb-ft of torque. The outgoing 4.8-liter naturally aspirated V8 is no match for the new powerplant. The smaller twin-turbo 4.4-liter makes more horsepower and nearly 100 pound-feet more low-end torque. The 650i will sprint from 0-60 in just a few tenths shy of the former V10-powered M6. Not bad for a car that weights over 4200 lbs.

The 4.4-liter V8 is mated to an eight-speed automatic that has to take some of the credit for the 650i’s responsiveness. The ZF 8HP70 shifts quickly and efficiently, and with so many gears, it shifts a lot. The 650i’s paddle shifters enable the driver to take quicker shifts for more spirited driving. 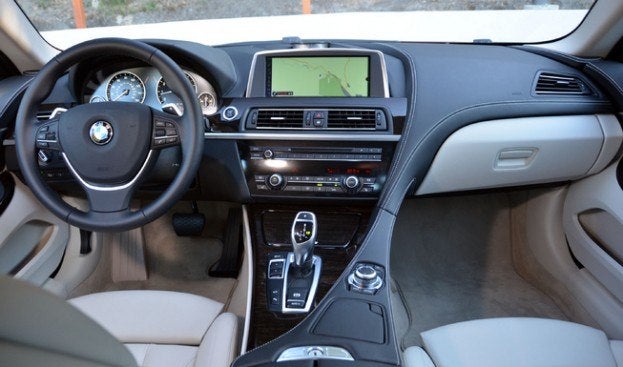 Luxury Abounds in the BMW 650i

This 650i xDrive tester ($86,000) came with all-wheel-drive, and the M Sport Package ($4,400) that includes Active Roll Stabilization. It also came with the optional 20-inch wheels and performance tires, LED Fog lights, M steering wheel and Aerodynamic kit ($1,300). The Premium sound system ($1,800) includes a satellite radio subscription for one year and an upgraded sound system.

Inside, the new BMW 6-Series is far better executed than the previous generation model with a better layout. The materials and finish are top-notch. The instrument panel with leather ($1,500) gave the new 650i a premium feel that is fitting for a vehicle with a final price tag of $100,000.

Standard features include a rearview camera, Xenon adaptive headlamps, park distance control, navigation, Bluetooth and LED foglights. The 20-way power Nappa leather front seats make it easy to find a comfortable seating position, at least up front. In the rear, the seating is tight, but adequate for taking two adults on a short trip to lunch. The 650i is Meant to be Driven

The 2012 BMW 650i Coupe is more driver-oriented, and fits well into BMW’s sporting aspirations. The 2012 650i always seems to have extra power in reserve, and pulled relentlessly up I-70 at altitude. The twin-turbo’s didn’t seem to notice the elevation and the new V8 made the heavy car perform like a much smaller car. The chassis, with the optional M sport package uses a multilink suspension front and rear.

This 650i tester, equipped with the optional active roll stabilization, provided exceptional roadholding ability. Through tight corners the car was difficult to unsettle and stayed flat with little body roll. The stability control can be turned off which allows the driver to get aggressive without it kicking in. As in other BMWs, the chassis settings are sport, normal, and comfort.

The driver assist package ($3,300) featured lane-departure warning, blind spot detection and a head-up display that keeps your eyes on the road. The feature is extremely helpful for watching your speed and keeping your eyes peeled for local law enforcement vehicles.

The estimated fuel mileage is 15/20 city/highway, but it will be hard with the cars performance to get mileage that good. But who wants this car for its fuel-efficiency? Sports car enthusiasts will buy this car and drive it for its pure sports car performance. BMW gave the 650i with a new twin-turbocharged V8 a great exhaust note when you step on the accelerator. Even with the windows up, the 2012 BMW 650i sounds like the true sports car that it was meant to be. 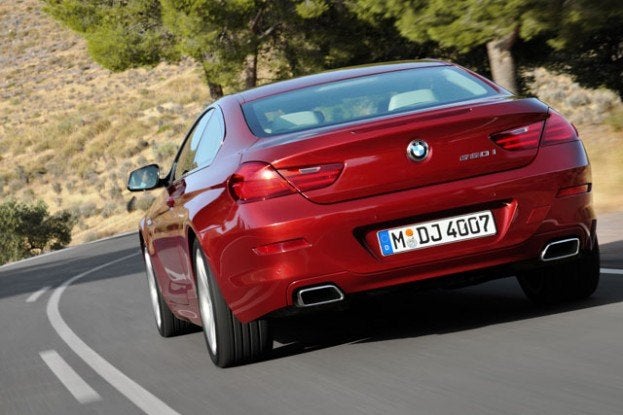 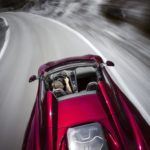 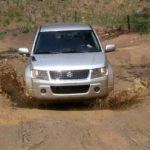