2012 Volkswagen Tiguan Review: New Updates Inside and Out

The Volkswagen Tiguan has been wildly popular in Europe and has only been in the U.S. since May 2008 as a 2009 model. Americans like their large SUVs and the Tiguan didn’t gain immediate acceptance from North American buyers. But that seems to be changing as sales of the Tiguan have been increasing steadily the last two years. And with the host of updates for the 2012 model year, there’s even more reason to believe the small crossover will continue on its growth path.

The 2012 Volkswagen Tiguan was totally revised and updated this year inside and out and gets improvements to fuel economy, upgrades to the interior and new color options. Outside, the 2012 Tiguan exterior now incorporates the new Volkswagen family front-end design. The tail lamps for the Tiguan have also been redesigned with cues similar to all new VW models, using a double-L design.

The interior of the 2012 Tiguan is what we have come to expect from VW. The cabin is comfortable and has an overall sense of quality about it. It’s not quite up to the level of an Audi, but the Tiguan uses high quality materials and the craftsmanship gives it a premium feel. The 2012 Tiguan features a new steering wheel with multi-function switchgear and an updated gearshift lever. 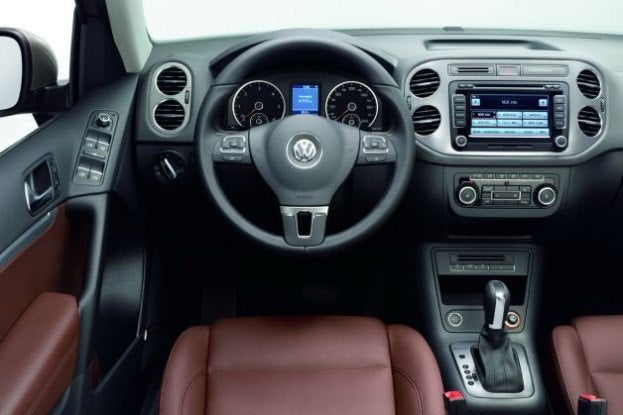 The well-shaped front seats are comfortable for longer trips but the height-adjustable steering column didn’t adjust down low enough to fit every seating position. The rear seats split 60/40 and have a pass-through door in the middle to carry cargo and passengers at the same time. Rear passengers can move the seats back to have more legroom and the seats also recline.

Where the small crossover comes up a bit short is in its cargo carrying ability. With the rear seats forward, the Tiguan offers 23.8 cubic feet of cargo. With the second-row seat folded down, maximum capacity improves to 56.1 cubic feet. Both the Honda CR-V and Toyota RAV4 offer about 17 cubic feet more cargo carrying room.

Volkswagen fans will be happy to know that the 2.0-liter turbocharged engine is still the powerplant in the 2012 Tiguan. The engine is the same TSI turbocharged four-cylinder four-valve engine used in the Golf GTI and produces 200 horsepower and 207 pound-feet of torque with plenty of power when you need it. Volkswagen has improved fuel-mileage in the new Tiguan by two mpg over the previous model. The 2012 model with all-wheel drive has an EPA estimated fuel mileage of 21/27 city/highway. Low-rolling-resistance tires coupled with new ratios in the standard six-speed automatic transmission helped squeeze out the additional mileage. The Tiguan offers the choice of front- or 4Motion all-wheel drive. 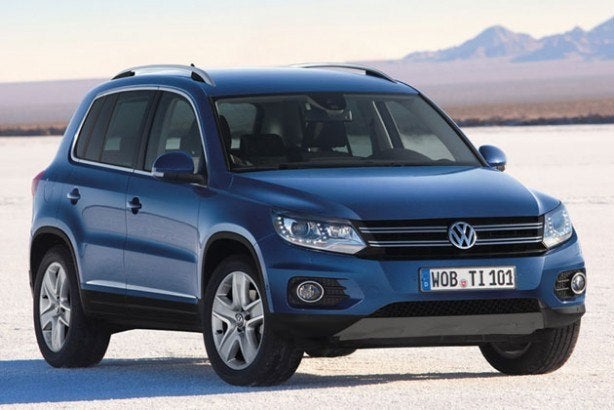 This Night Blue SE tester ($32,480) came with a host of standard features like a panoramic power sunroof and navigation. For those who live in cold climates, the SE comes with heated front seats, heated outside mirrors, fog lamps and heated windshield washer nozzles. All 2012 Tiguan models come with Bluetooth, an auxiliary port, privacy glass and six airbags. An eight-speaker audio system is standard, and a touch-screen audio system is available on the Tiguan SE. The Tiguan will offer a 19-inch wheel option. The 2012 Volkswagen Tiguan SE is a sporty fun-to-drive small crossover. The 2.0-liter turbo engine with 200 horsepower isn’t the most powerful in the segment, but offers plenty of power for most driving situations. While cornering, the Tiguan feels confident and the steering is responsive in tight corners. Most commuters will be driving the Tiguan in the city where it’s lively and excels in zipping in and out of traffic and tight spots.

For those looking for a fun-to-drive crossover that offers the safety of all-wheel-drive and all-weather capability, the 2012 Volkswagen Tiguan is a good choice if you don’t need to carry large amounts of cargo.