To everyone here that reads my articles, you’ll know that I’m not a fan of the Volkswagen Beetle, or any car that realizes the majority of its sales because the buyer says “it’s cute.” And since the Beetle was reintroduced to the market in 1998, it’s undergone so few changes that any non-Beetle enthusiast wouldn’t be able to tell the difference between a 1998 model and one made 12 years later in 2010.

I mean, look at this:

So for 2012, Volkswagen decided it’s time for a change. But despite my distaste for the car in general, it is what some would call an “iconic” design, which probably explains why VW didn’t mess with it for over 12 years. So how do you redesign a, [deep breath]…icon…without screwing it up? Meet the 2012 Volkswagen Beetle: 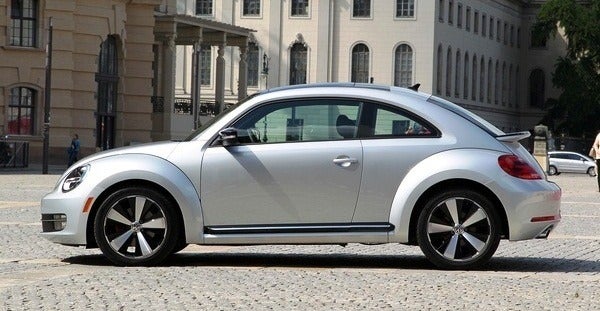 So…kinda make it look like the classic one again, I guess. Makes sense, it worked for the Nissan 370Z.

It is a big improvement. Gone is the overly-symmetrical profile in favor of proportions that make it look like a real car instead of an upside-down Mickey Mouse head. In comparison, the 2012 Beetle is aggressive. It’s lower, wider, and longer, with a longer front hood, wider track, longer wheelbase, and set-back windshield. Should help and reduce the cutesy appearance while still allowing it to look natural with pink fluffy dice hanging from the rearview.

Inside is also an enormous improvement. Instead of explaining the styling differences, it’d be easier on both of us to just show you.

Here’s the God-awful interior in a 2008 Beetle: 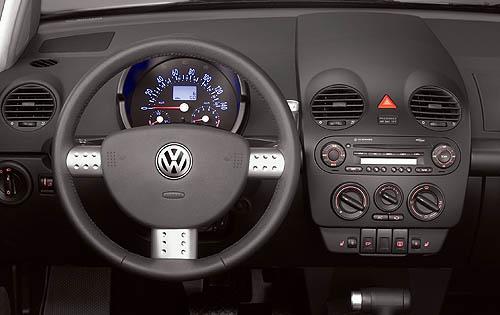 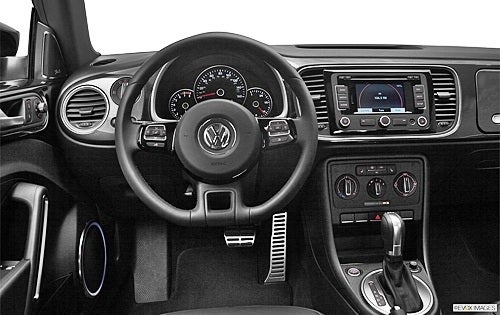 Much more modern, much more “current VW,” albeit a tad busy and cluttered by comparison.

And it’s not all bad to drive, either. In the States, our choices of engine include a 2.5-liter 170 hp mill, and a turbocharged 200 hp version of the same powerplant. We drove the Turbo version, which showed that at times, it can even be fun.

On top of the engine upgrade, the turbo version gets bigger 18″ alloys, rear spoiler, chrome accents, sport seats, a Cross Differential System (helps with handling,) a $3,600 higher price tag, and the title of “fastest production Beetle ever.” 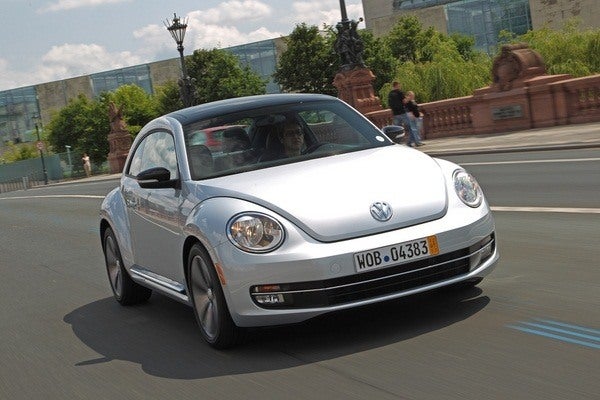 If you’re more into the retro thing (and the “not spending $3,600 extra” thing,) you might want to stick with the base 2.5-liter model, which tends to pull of that feat a tad better, thanks to the lack of spoiler and chrome accents, along with the disk-style alloys:

The Turbo is a decent drive. Nothing special, but not bad. Can be fun. Like driving a standard Golf, kinda. If you go with the Turbo, it comes standard with a 6-speed manual gearbox, or for $1,100 (and one city MPG) more, Volkswagen’s excellent DSG unit, which we drove. Stick with the 2.5L model and you get a 5-speed manual or standard automatic.

The interior, as you already know, looks much better than before, but I do have some gripes about it. The “Black Obsidian” plastic trim always looks dirty, the blatantly fake carbon fiber trim just looks awful, the cupholder placed under the center console makes it impossible to place anything in it much taller than a can of soda, there is no sunglasses holder, or extending sun visors, which should absolutely be standard on cars nowadays. Being a modern VW, you get black bits and shiny bits with plastic in between, and being a post-2012 VW, they’re a bit cheaper feeling than they were before. Still better than say, a Dodge, but a tad disappointing nonetheless. 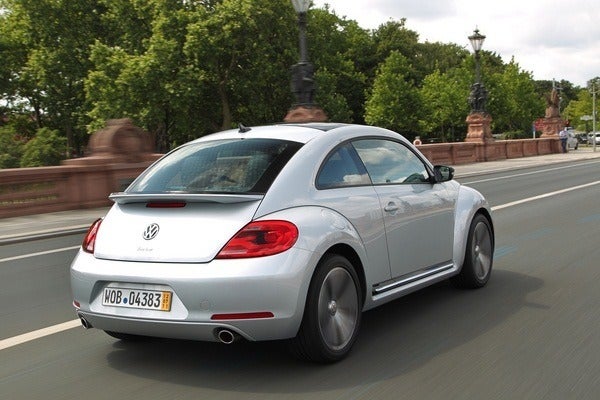 We all know the Beetle badly needed a redesign, so good move there. Volkswagen has also been trying to get the Beetle away from the “Chick Car” stigma, so it makes sense they made something more aggressive and gave it fake carbon fiber trim (no matter how terrible it looks,) to attract more males. But is that the right move? I’m not sure it’ll be a “cool” car no matter what they do to it, so I wonder if it’s worth even trying, and possibly abandoning part of their most loyal customer base, who bought the car for its cute-factor.