A Concept of a Concept – the Prindiville Lamborghini Aventador J

It’s not often we see a concept car based on a concept car, but British car tuner Prindiville has given us exactly that. Meet the Prindiville Lamborghini Aventador J concept. We saw Lamborghini unveil the Aventador J at the 2012 Geneva Motor Show in March, getting some pretty good feedback. The car uses the same powerplant as the standard Aventador – a 700 horsepower 6.5-liter V12 mill attached to Lamborghini’s seven-speed ISR gearbox that knocks off shifts as fast as an F1 car.

Prindiville, of course, has taken it to a new level. They’ve managed to remap the ECU and replace the exhaust, bringing the already impressive 700 hp to 805 – ensuring the car is (hopefully) only sold to driving experts. To cope with the extra oomph and new 0-62 mph time of 2.5 seconds, they’ll replace the standard braking and suspension systems with their own. Top speed is in excess of 220 mph. Many of the car’s exterior panels are replaced with Prindiville’s own carbon fiber versions, adding its own style and reducing weight.

The interior will be unique, of course, showing off aluminum interior panels and air vents (I’ll have to see that one,) as well as the Prindiville logo etched into the leather and alcantara seats. As in most of their cars, they’ll add their signature 1,000-watt entertainment system with five-inch LCD screen, DVD player, sat nav, and software featuring maps, setups, and telemetry of some of the most well-known race circuits around the world. That’s pretty cool. Finishing it off are their hand-built subwoofer amps.

While it’s important to realize that the Prindiville Aventador J Concept is in fact just a concept and hasn’t been built, they have managed to build eight examples of their own “regular” Lamborghini Aventador models, which are currently on sale and feature many of the same upgrades (including the boost in power) as the Aventador J: 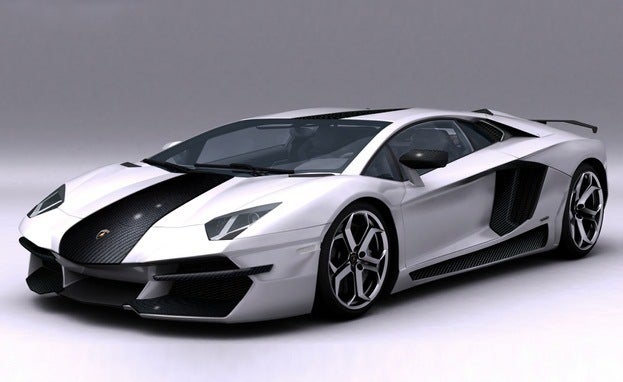