Will the Urus Conform or Change Lamborghini’s SUV History? The crossover sport utility vehicle segment has been an area where paradoxes are now given form by daring automotive designers. Advances in vehicle technology and a break from the previous conventions for what is expected from a car brand have led to the some products many would have not previous conceived. The thought that Porsche would have created the Cayenne or the notion of a 547-horsepower sports sedan-like crossover X6 M in the BMW line-up has sparred some of the greatest debate by motoring enthusiasts where the line between refreshing whimsy and outright wackiness exists.

While BMW and Porsche have only recently been pushing boundaries, Italian sports car builder Lamborghini had began testing those limits with sport utility motoring since 1977. Lamborghini’s name was first connected to off-road capable motoring when the United States military was seeking an all-terrain light vehicle. Called the Cheetah, not only did the vehicle lose to AM General’s Humvee, neither Lamborghini or its contractor Mobility Technology International received the one and only prototype back after its evaluation.

Instead of targeting the armed forces for sales, Lamborghini would fight to serve the civilian market in the 1980s with the monstrous LM002. Produced from 1986 to 1992, just over 300 examples of the unusual Lamborghini LM002s sold ahead of its time. The sport utility vehicle craze emerging through this past decade left many expecting Lamborghini was going to reveal a successor to their first production attempt at exotic brawn. 35 years since the Cheetah launched the Raging Bull emblem into the utility vehicle frontier, Beijing’s 2012 Auto China event served as the exhibition for the Lamborghini Urus concept. A definite headliner of the Chinese auto show, the Lamborghini Urus concept’s trek to production causes the history of the LM002 to resurface. Question is, even with limited hard facts released on the new vehicle, how does the Urus design compare or advance Lamborghini’s short but eye-catching utility history set by the LM002? 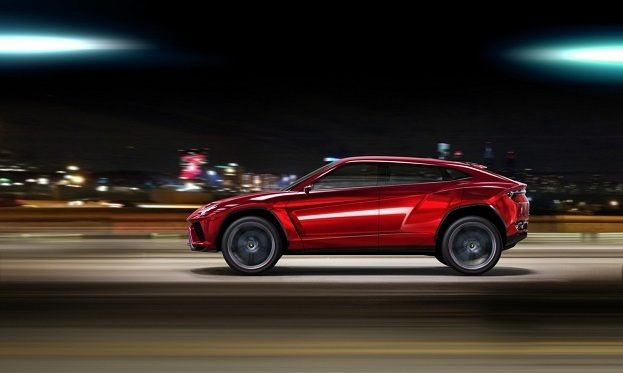 LM002: A combination of fiberglass and aluminum, the composition of the Lamborghini LM002 bodywork over a tubular steel frame was like few things seen on the road for its day. Never before (or perhaps ever again) would a Lamborghini receive such a utilitarian exterior treatment. Corresponding with 1980s style where straight line were the norm, the Lamborghini sport utility (called an all-terrain vehicle) have arguably not aged as well as the Countach supercar. Seeing the LM002 from the perspective of an older vehicle, build quality was also questionable with the only production Lamborghini SUV.

Riding on big off-road tires around 17 wheels, the Lamborghini LM002 was given a 17-inch ground clearance for better for difficult terrain.

Urus: Benefiting from many explorations into car-like designing for SUV and crossover vehicles across the auto industry, the Lamborghini Urus concept appears with an elegant, supercar-like exterior. An aerodynamic shape comprised within a lightweight carbon fiber form, the Urus is advertised as “The SUV Super athlete. The nose area of the Urus (wearing full LED lighting) recreates the Aventador’s three-dimensional shape while other exterior lines also relay a similarity to current Lamborghini styling. Appearing more car-like than the LM002, the Lamborghini Urus concept is actually 3.54 inches longer than the 20-year old utility vehicle. Where the Urus best achieves its sportier profile is through a considerably lower overall height.

Comprising of an aluminum-carbon fiber mix, the Lamborghini Urus rides on 24-inch wheels. 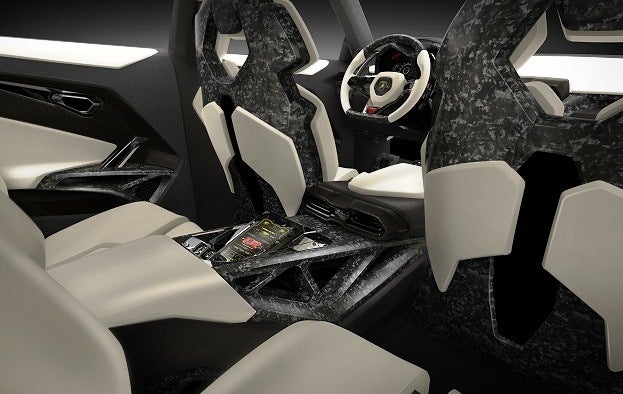 LM002: Equipped with four-person seating (the only production Lamborghini to date to properly seat four adults), the inside of the Lamborghini LM002 features a top-notch attempt at luxury feel. Leather trim and wood were at the same high quality as seen on their Countach supercar. Though the interior was refined, the ride of the LM002 is known to be quite harsh.

Instead of a proper locking truck, cargo storage was presented in an open-air compartment on the rear of the Lamborghini LM002.

Urus: Like the LM002, the Lamborghini Urus concept car offers bucket seating for four occupants. While Lamborghini passengers seat in leather-upholstered seating, trim of the Urus’ interior is topped with the use of a Forged Composite compound co-developed with Callaway Golf. An electronic touch interface in the center of the dash panel caters to the Lamborghini Urus’ rider with navigation, climate control and entertainment controls. There is also a touch screen display available for the rear seat passengers.

Every much unlike the Lamborghini LM002, the Urus features an abundant interior luggage compartment. LM002: Powering the Lamborghini LM002 is a front-mounted 5.2 liter V-12 lifted from the Countach. Performance with the 5.2 liter propelled the Lamborghini with 444 horsepower. A larger, 7.2 liter engine can also mentioned to be under the hood of some LM002 models but it was not part of the vehicle’s official specified options. Fitted with a five-speed manual transmission, the Lamborghini LM002 motion is provided through a permanent all-wheel drive system.

With a top speed equal to just above 130 miles per hour, the LM002 accelerates from 0 to 62 miles per hour in a respectable 8.4 seconds. Provided with a high ground clearance, large tires, and the lack of electronic driving aids, the Lamborghini LM002 driving personality on pavement was surprisingly not too bad but the overall ride quality was not known as the most comfortable at high speeds. The LM002 was ideally suited to off-road trails where the vehicle succeeded in taking Lamborghini owners in a unique way the company is only now thinking of reinstituting.

Urus: When the Lamborghini Urus concept was unveiled at the 2012 Auto China, there was no definitive information on the engine type was provided by the auto company. Lamborghini has released a performance number of 600 horsepower would be found under the hood of the Urus. The engine is touted as being surprisingly efficient with low CO2 emissions. A dual-clutch transmission transfers engine power through the Urus’ permanent all-wheel drive system (a much-more advanced version to the one found on the Lamborghini LM002. Lamborghini Urus’ suspension system also marries traction control for a very controlled driving sensation.