For a long time, the scope of automotive power was covered by the saying “there is no replacement for displacement”. In the 21st century, the rules for gaining optimum engine power have changed in the face of improving emissions and fuel economy. The widespread usage of technologies such as variable valve timing gasoline direct injection, forced-air induction and friction-reducing components has not only allowed for more power but better combustion efficiency.

Thanks to the best efforts of auto companies today, the modern automotive marketplace now has small four-cylinder engines with the performance of six-cylinder engines of a decade ago and six-cylinder powerplants delivering horsepower that can make older V-8 engines envious. The Ford Ecoboost family of engines, Chrysler’s Pentastar V-6, Mazda’s SkyActiv and Audi’s TFSI powerplants net performance qualities comparable to larger engines but with improved fuel economy as an affirmative win-win situation for motorists. Debuting at the 2012 Auto China exhibit in Beijing, British luxury brand Jaguar revealed their next line of gasoline-powered production engines playing along with the modern engineering philosophy of high power, high technology and high fuel efficiency. 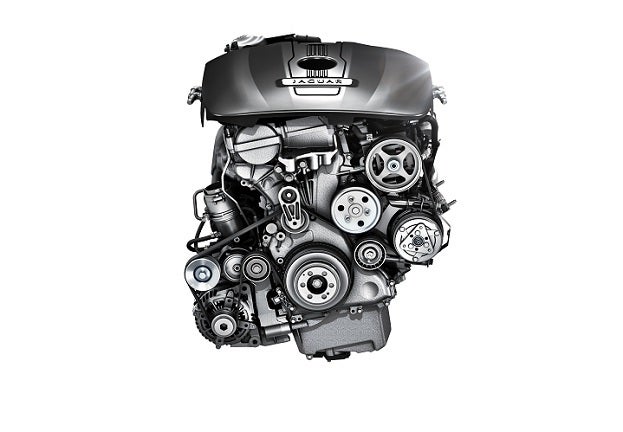 The 2013 model year supercharged 3.0 engine will replace the Jaguar XF’s naturally-aspirated 5-liter V-8 unit. Presenting a horsepower drop of about 45 horsepower for the XF sedan over the current eight-cylinder, the advanced 3.0 V-6 is estimated to be as much as 20 percent more efficient. For the upcoming Jaguar F-Type sports car, the supercharged 3.0 V-6 engine will roar with 380 horsepower. An eight-speed automatic transmission and the luxury brand’s Intelligent Stop-Start System technology will be incorporated on Jaguar’s new supercharged V-6 engine. In addition to the XF sedan, the six-cylinder engine will also be found in the full-size XJ model in markets including Europe, North America and China.

An engine successfully demonstrated with corporate sibling Range Rover as the main powerplant for the Evoque, the 2.0 liter turbocharged four-cylinder engine’s employment by Jaguar’s car-based application retains most of the redeeming features found on the compact crossover. A 240-horsepower powerplant weighing just over 304 pounds (238 kilograms), the 2.0 liter turbocharged is designed for reduced-friction and faster warm-up times from start-up. Along with high-efficiency, twin balancer shafts achieve luxury car refinement. Jaguar touts that the soon-to-be produced four-cylinder engine supplies more torque than the brand’s 3.2 liter AJ-class V-8 unit that powered European-sold Jaguar XJ sedan. Set for widespread availability on the Jaguar XF, the XJ in European as well as Asian markets will also offer the small gasoline driven turbocharged four-cylinder powerplant. Displayed for the first time in China as global powerplants, both high-tech 2013 engines are slated to be available on the Jaguar XF sedan in North America providing a much-needed option for the younger luxury car customers. In the United States, the new engines will help Jaguar Land Rover in their attempt to comply with CAFE (Corporate Average Fuel Economy) regulations. For 2010, Jaguar Land Rover paid a 3.25 million dollar fine due to their fleet fuel economy average falling outside the 35 mile per gallon car target. While exact numbers are not yet released on either powerplant choice, an average around the mid-to-high 20 miles per gallon range sounds most plausible.

Promising the upcoming Jaguar F-Type will be a recipient of the 3-liter engine, pondering leads to if the smaller engines could also be mated to a future North American version of the XF Sportbrake.