Given its iconic nature and importance Volkswagen views the Beetle as a priority. The redesigned 2012 model had a ton of thought and development dollars put into it, and the result is by far the best Beetle yet. With a more squared off exterior appearance and performance emphasis, it is also designed to appeal to men more than the New Beetle. With the New Beetle, there was a convertible model.

It never was as cool as the Ragster Concept that VW introduced though. Once again, VW is showing off a Beetle roadster in the form of the E-Bugster Speester concept in Beijing. The hardtop E-Bugster was introduced at the North American International Auto Show in January, but this time the car has its top off. We’re seeing definite influence from the Porsche Boxster Spyder here, and that is a good thing. The current Beetle has some Porsche vibes in its design. Speedster means the roof is sawed off, with a lowered windshield that affords slicked back, aggressive proportions. As its name implies, E-Bugster Speedter is electric. 100 miles of range from a 114 horsepower electric engine. The cool part is that it is quick charge capable, which allows for the battery to be 80 percent charged in about half an hour. Still not as a good as a quick fill up at the gas station, but we’ll take what we can get.

Aside from the powertrain (and who knows maybe even that in the future), we may actually see something like the E-Bugster Speedster make it to production. The body style fits the current Beetle so well, and it clearly is a theme VW likes to explore. We’ll have to see if they pull the trigger on it this time around. Maybe we’ll see influences from this on the inevitable convertible model, who knows. 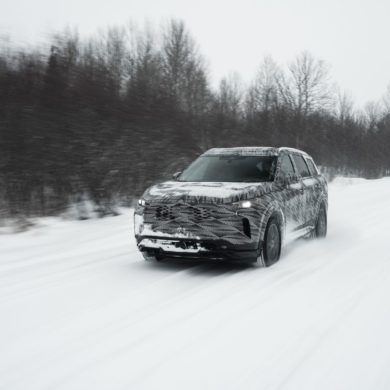