If you haven’t noticed, the South Koreans have the Japanese and everyone else in the automotive world looking over their proverbial shoulders. Kia, who is owned by Hyundai Motor Group is bringing new and innovative cars and designs to the market faster than any other carmaker. And it’s not just quantity, but the South Korean auto company is producing quality cars.

The 2012 Kia Rio is yet another example of what Hyundai and Kia are bringing to the automotive world. The Kia Rio is completely redesigned for the 2012 model year and will compete with anyone in the subcompact segment. It comes with all the right numbers, in terms of power, fuel-efficiency, and price. It even comes with the style and refinement found in more expensive cars. Table of Contents show
Ready to Compete With Anyone
Youthful Energy
Top-Of-The-Line SX-tras
Before you Buy
Update – We Get Another One!

Ready to Compete With Anyone

The Kia Rio comes in two body styles, a four-door sedan and Rio five-door hatchback versions. We’ll be testing the five-door hatchback SX model ($17,700) that competes in the subcompact segment against the Ford Fiesta, Chevrolet Sonic, Hyundai Accent, Nissan Versa, Honda Fit, and Toyota Yaris. The Kia Rio has styling that will surely appeal to the millennial generation that Kia is going after.

And the little subcompact has both function and appeal with an interior that features a soft-touch dash and door panels, matte-silver trim, height-adjustable driver’s seat and a tilt/telescoping steering wheel. The Rio SX comes with amenities that include an exterior temperature indication, map lights, and covered visor vanity mirrors on both sides. Cargo space is the five-door is reasonably good and can be expanded by folding the split rear seats flat. The 2012 Kia Rio is fun to drive and has a youthful spirit and energy about it. The Rio is offered with only one engine, but it’s a good one. The 1.6-liter four-cylinder engine uses direct fuel injection, which yields good power and fuel economy.

The Rio’s 138 horsepower and 123 lb. ft. of torque is better than anything in the non-turbo class. Fuel economy is a strong selling point for the Rio. EPA numbers are 30/40 mpg city/highway, which are unmatched by anything in the subcompact segment.

The Kia Rio uses a six-speed automatic where competitors only offer a four or five-speed transmission. The extra gear allows for better acceleration and lower highway engine rpm’s which help in performance and fuel-efficiency.  On the road, the Rio feels quite comfortable and the sport-tuned suspension is tight without being too firm, and the Rio feels stable at high speeds. 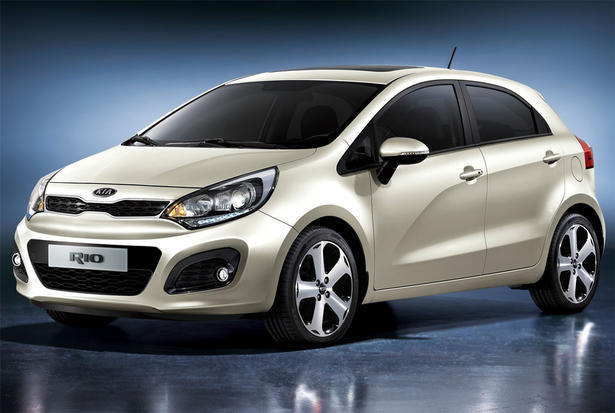 The Kia Rio SX gets the top of the line in luxury and sportiness, by adding bigger front brakes, a sport-tuned suspension with firmer settings, and 17-inch alloy wheels. The extras give the Rio a sportier look on the outside, and improved performance on the road with added responsiveness for more spirited drivers. If you are more inclined to get where you are going quickly, SX buyers will find the features more to their liking and pay the features-heavy price premium to get them.

The Kia Rio SX is a good choice in the subcompact segment because it does a lot of things well. It gets excellent fuel economy, it’s fun to drive, has a sports car mentality and the hatchback is highly functional. Update – We Get Another One!

The new 2012 Kia Rio has shown the world that fun and affordability in the subcompact market are not impossible to find.  With a brand new design brought to the 2012 model year, this new look brings with it a sedan and five-door ride, all with a sleek new body.  Along with the improved styling has come the fuel economy many are looking for in a new car.

While the Rio is a small car, it still manages to be spacious inside, with the new five doors bringing increased legroom and headroom in the front and rear.  Even for taller passengers, there is more than enough room inside the car, giving an almost deceiving feeling to its actual size. The Rio is not a technologically driven car, but still has great options available, including a great multimedia system called UVO, along with a backup camera, Bluetooth connectivity, and steering wheel controls.  Overall, the interior has a smooth, comfortable layout that doesn’t intrude on the comfort or passengers.

The 2012 Kia Rio is one of the best small cars to hit the streets in a while, and with a strong engine producing 138 horsepower and 123 ft lbs of torque, it is no shortage of power to lead to some nice spirited drives through the corners and straightaways.  And while it is not the fastest subcompact on the road, for the price, it really is one of the better ones to drive.  Zero to sixty is achieved in less than 9 seconds, all while maintain 30 mpg in the city and 40 on the highway. With a great amount of comfort and safety also crammed into this small car as standard, including six airbags, ABS, and stability control, this is also a great car for the average driver on the road.  The increased vision with the 5-door coupe minimizes the blind spots, and with a car as peppy as this, it is almost necessary for navigating the chaotic roads.

There are no shortages of accolades that can be said for the Kia Rio, but the best would be to describe it as the new go cart for the road.  It is not the fastest and doesn’t have all the electronic additions becoming common in rides these days, but the package it delivers truly gives it great marks.  And while the road noise is a little loud, and the seats a bit hard, the redesigned Rio brings to the table styling and peppiness that is often reserved for higher priced cars.