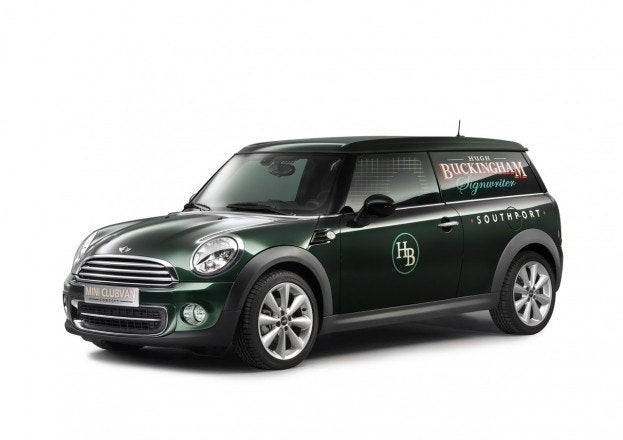 Another day, another new MINI variant. This time it a MINI van, in the most literal sense of the term. When MINI first launched in the United States about 10 years ago, it was with one car – the original hardtop. Today there is hardtop, coupe, convertible, Roadster, Countryman and Clubman.

An even smaller MINI, around the size of the original is said to be in the works as well. It was shown off recently and dubbed Rocketman. If BMW wants to, the lineup could proliferate further -a more traditional sedan, truck bed model, etc. As they have shown, possibilities are nearly endless. The model we’re talking about now though is the Clubvan. It was first shown at the Geneva Motor Show this past March. MINI executives just confirmed production of the “concept” to Car & Driver magazine. Apparently MINI thinks there is a market for a small, fuel-efficient transport vehicle in the U.S. They say the van will boost load space versus the Clubman. Instead of traditional sheetmetal covering the rear windows though, the Clubvan will have polycarbonate and safety foil inside. On the exterior there will be body-color exterior foil perfect for advertising your business.

The reason why they did this probably comes down to cost effectiveness. We could see Clubvan being used for some small businesses as a transport vehicle, and maybe for small deliveries such as a bakery. It can’t be for much more than that, as the space back there isn’t huge by any means. The rear seats are (of course) ditched, and there is an aluminum grate separating the front passenger compartment from the loading area. Could it catch on with hip restaurants, bakeries and the like? MINI thinks it will. C&D reports the Clubvan will go on sale this September as a 2013 model.