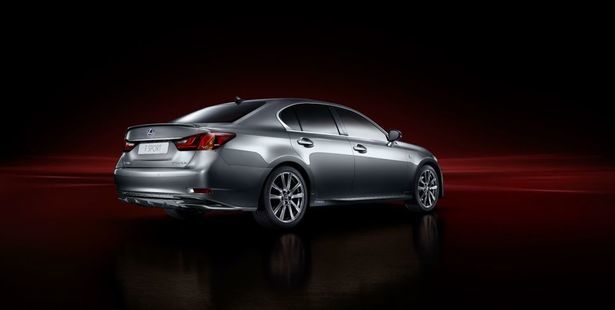 Since the mid-size Lexus GS sedan first appeared in 1993, it has wanted to be a sport sedan but could never get there. 20 years and three subsequent model generations later, a truly sporty GS has finally arrived. A high-performance F-Sport version of the GS350 with 19-inch wheels, bigger brakes, sportier tires, and adaptive suspension is being offered for 2013.

Outside, the redesigned 2013 Lexus GS350 F-Sport takes its styling cues from the LFA supercar and include a redesigned front fascia with an hourglass-shaped spindle grille, flanked by twin angular chrome strips. LED daytime running lights that run horizontally beneath the headlamps create a distinct nighttime silhouette. 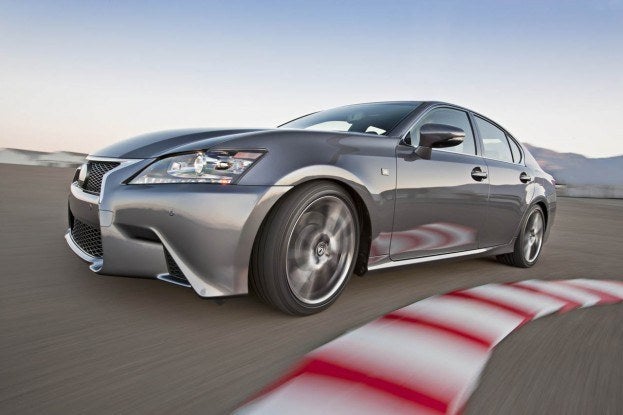 Its more than skin deep

The F Sport gets goodies underneath that transforms the GS350 into a true sports sedan. It gets beefier anti-roll bars, firmer springs, an adaptive damping system, revised bushings, and staggered-width summer tires. The F Sport can be equipped with optional rear-wheel steering that can add up to two degrees of input to the rear wheels. The F can also be had with Active Torque Control all-wheel-drive for optimum traction in wet or dry conditions.

Under the hood, the 2013 Lexus GS350 F Sport keeps the same 3.5-liter V-6 engine but gets a slight power increase to 306 horsepower and 277 pound-feet of torque. Tough luck for fans of the V8 engine, though, as Lexus is killing that option. The F uses the same 6-speed automatic transmission but gets paddle shifters. Lexus claims the new GS350 will pull off a 0-60 mph time in 5.7 seconds and has an electronically limited top speed of 142 mph. Don’t cry over the loss of the V-8

It’s little wonder that the V-8 was killed off. The all-wheel-drive GS350 F Sport offers nearly identical performance and superior fuel economy: 19 mpg city and 26 highway versus 17/24 for the 2011 GS460.

And the V-6 certainly has enough power to get the job done. The V-6 does get a small horsepower increase but the improved six-speed automatic’s quicker shifts make a big difference in performance. Add in the standard paddle shifters, and the F responds to driver inputs with precision. Handling has been improved by widening the track by almost two inches and increasing body rigidity 14 percent. The results can be felt in the corners with greater steering response and reduced body lean. Maybe Lexus borrowed some of the technology from the $380,000 LFA supercar. Lexus didn’t forget about the inside

The aggressive exterior design of the F Sport isn’t the only thing that gets attention. Sit behind the wheel and you can feel the thinking that went into the F’s interior. There was a focus put on driver comfort and engagement with a lowered steering wheel and more supportive seat design for holding the driver secure during spirited driving.

The GS350 F Sport is also chock-full of technology, with things like standard Bluetooth and audio streaming capabilities, and a text-to-speech function that reads text messages to drivers and allows them to respond with pre-programmed responses. An upgraded, 835-watt, 17-speaker Mark Levinson audio system will is available, along with a 12.3-inch split-view high-definition display.

At $58,122 this all-wheel-drive GS350 F Sport tester came with Blind Spot Monitor, Intuitive Park Assist, and the all-weather F Sport Package. Other options are available like radar cruise control ($2000); a head-up display ($900); lane keep assist ($500). Although the F-Sport is not inexpensive, the GS350 F Sport can be considered a respectable luxury-car value, particularly compared with the German entries. 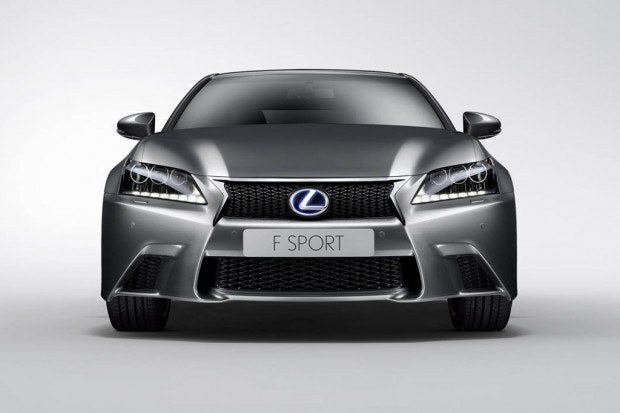