Most readers of Automoblog will be familiar with the issues that have been in the media surrounding the Chevy Volt. The Volt has been hampered by a number of issues, including customer confusion over its gas-and-electric technology and a government investigation into post-crash-test fires, which ultimately vindicated the car.

For 2012, Chevrolet has added structural enhancements to the Volt to reduce the risk of battery damage in an impact. Seldom mentioned is that the fires occurred two days or more after the Volts were crashed, and after the cars had been left sitting without the post-crash storage steps recommended by Chevrolet.

The most recent issue involved General Motors announcing it was replacing the cord and charging device that lets owners charge the car from a 120-volt household outlet.  Some Volt owners have complained that their 120-volt charger “overheats during use and have even documented online videos of melted 120-volt chargers.” But Consumer Reports has said it has not had the problem in its testing of the car, and even put the Volt on its “recommended” list. 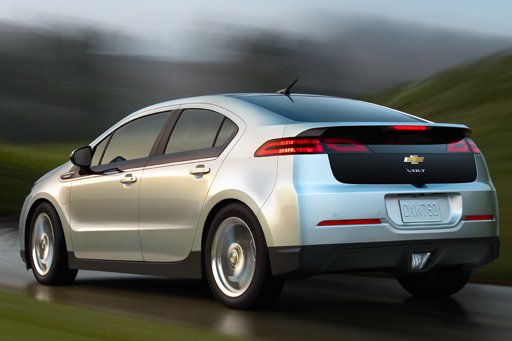 When you take away all the negative news, the 2012 Chevrolet Volt is an impressive engineering achievement. When the car made its debut, much of the general public and media assumed the Volt was a pure electric car. But that is a total misconception. The Volt is essentially a plug-in hybrid, and will run much faster and farther under electric power only, than a normal hybrid vehicle.

In the Volt’s case, this means up to 100 mph and anywhere from 25-50 miles without using any gasoline. This gives many commuter’s the ability to drive to work and back, plug in the Volt when they get home, and essentially never need to buy gas.

The Volt is a four-door, four-seat hatchback that is laid out with two bucket seats in front, two in the rear and a center console running the full length of the cabin. The Volt feels quite roomy in front, and the front buckets are handsome and some of GM’s best seats ever. The Volt’s hatchback design allows for convenient loading of cargo, and with the rear seats folded flat, cargo capacity is increased.

The 2012 Chevrolet Volt accelerates quickly from a stop light and once up to speed it is quick and responsive. The Volt has the kind of performance that is very typical of electric vehicles and offers a sporty driving experience. The placement of its battery pack creates a lower center of gravity than that in most sedans, and gives the Volt a sure-footedness in tight corners.

The electric Chevrolet Volt will give most drivers a pleasant surprise with its quiet smooth operation and quick acceleration. But be ready for some sticker shock because the Volt is expensive compared to conventionally powered compacts, especially before government tax credits. A standard Volt has an MSRP of $39,145, and even with a $7,500 federal tax credit, a base Volt will still cost about $31,500.

As you can see, how far you routinely drive would be a huge factor in determining how thrifty the Volt would be for you. Most urban owners will be able to take advantage of its electric range and use very little fuel. And electricity costs for recharging are but a fraction for the equivalent amount of gasoline.