Travis Pastrana to Rally Behind an Extreme 2013 Dodge Dart

The 2012 auto racing season is truly on! In NASCAR, the Daytona 500 initiated the 2012 stock car campaign with an intense, wild affair that involved Matt Kenseth in the winner’s circle and a destroyed track jet dryer.

Both major open-wheel racing series is now underway with Formula 1 opening in Australia last week and the IZOD INDYCAR Series ringing in a new era at St Petersburg when Helio Castroneves won with a brand new Dallara powered by a Chevrolet engine.

Finally yet importantly in the minds of many motorsport fanatics, sports car racing has kicked off with the Rolex 24 of Daytona won using a Ford-powered Riley and the 60th anniversary Mobil 1 Twelve Hours of Sebring captured by the Audi R18 TDI prototype.

A time when the shear sense of speed awakes the thrill watchers and seekers, the spring weather of auto racing competition awaits in the growing motorsport of Rallycross. An all-terrain challenge similar to traditional road rally races, Rallycross competition is encompassed inside of an arena-style course. The more spectator-friendly format is targeted to win over motorsport audiences to the rally car spectacle.

Travis Pastrana, one of the most renowned American jack-of-all thrill-seeking trades, has announced to be one of the drivers appearing in the 2012 Global RallyCross series.

A racing competition derived from the closed-circuit X Games rallycross event, the commitment of Pastrana to the series will definitely lift the sport off the ground with major gusto. Travis Pastrana’s appearance at the May 26th event at Charlotte Motor Speedway will also feature a launch of the 2013 Dodge Dart into auto racing.

Fitting Pastrana’s attitude and passion, the silver and blue, custom-built vehicle 2013 Dart Global RallyCross series car (created through the cooperation of Dodge and the performance-oriented SRT brand) will be the world’s most extreme example of the compact car. Looking the part of a rally car, the striking look of the Dodge Dart is clearly visible in racing form.

Looking stock on the outside, Travis Pastrana’s 2013 Dodge Dart rally car is very much detached from the production vehicle. While the engine of the Travis Pastrana 2013 Dodge Dart reflects the same engine displacement of the standard 2-liter Tigershark four-cylinder powerplant, the 2-liter engine found in the racing car is far from anything that will wear a dealership showroom sticker.

The racing purpose-built 2-liter engine on the rally car utilizes a high-flow turbocharger that lifts horsepower to the 600 range. Travis Pastrana’s access to 600 horsepower and over 550 pounds-feet of torque will be put to good use through a Sedav 4-wheel drive system.

According to SRT brand Senior Engineering Manager David Bailey, estimated acceleration from 0 to 60 miles per hour with the Global RallyCross prepared 2013 Dodge Dart could take just 1.9 seconds (even faster than the fastest accelerating production cars available in 2012). 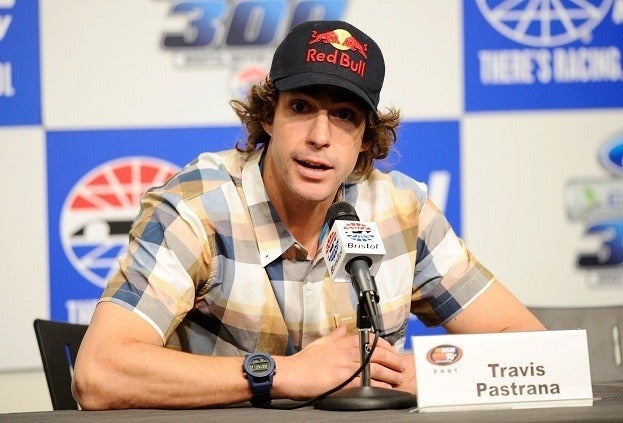 Pastrana is also planning his NASCAR Nationwide Series debut at Richmond International Raceway in late April in association with Michael Waltrip Racing. Ralph Gilles, President, and CEO of SRT describe the teaming with Travis Pastrana as a natural fit. “Travis is a living example of what action sports activities are all about, so he fits in perfectly with the youthfulness and passion for performance of the Dodge brand and the SRT Motorsports team,” said Gilles confident that Pastrana and the specially prepared 2013 Dodge Dart will have a Global RallyCross season containing success.

Debuting in production form just under two months ago at the 2012 North American International Auto Show (with some advance presentations by other publications who did not respect Chrysler’s request for disclosure ahead of the car’s premiere), the 2013 Dart launches as the first Chrysler branded product developed directly with their Fiat Group partnership.

Applying much of the Dodge Charger’s DNA to the 2013 Dart, the auto brand does not want buyers to think of the new compact car as an economy-priced mere compact car. For what will be 7 ventures in the 2012 Global RallyCross racing series, Pastrana will send the Dart flying for a memorable impression.