In 2010, Citroen showed off its gorgeous Metropolis Concept. Brash, grand, over-the-top, audacious – it simply begged to be produced. The introduction of the Metropolis in China was very telling. The Chinese market, with its penchant for chauffeur-driven vehicles, offers a ripe-opportunity for full-size luxury sedans. Where else would BMW feel the need to introduce a long-wheelbase 3-Series?

Following the introduction of the Metropolis, Citroen’s CEO of Asian operations Gregoire Olivier indicated that the company would be producing it as the DS9. Since then we haven’t heard much more about the car – until now. The Citroen DS9 Concept is being shown off at next month’s Beijing Auto Show, but thanks to French magazine Automobile, we don’t have to wait until then to check it out. 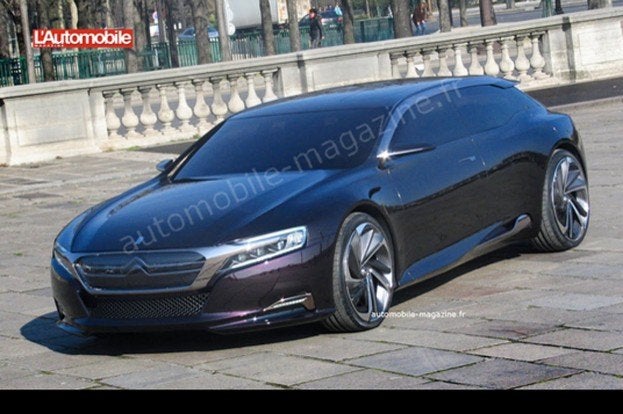 The DS9 Concept was captured undisguised as press photography was being shot in Paris, France. It isn’t as Citroen was trying to hide it or anything – the car was right in the middle of one of the most trafficked areas of the city. The upcoming DS9 is another key part of Citroen’s revival of the DS moniker, which includes the DS3, 4 and 5. Unfortunately, the DS9 Concept doesn’t share as much with the Metropolis Concept as we had hoped. Citroen likely toned down the car in order to make it more appealing to a broader array of markets around the world.

The resulting DS9 Concept is more European, with a shooting brake body style. The car cuts a rakish profile far different than any other full-size luxury sedan. Citroens have always been quirky – why change now? You lose brand values when you try to go more mainstream. We’ve seen some of that with the smaller DS lineup models, but we’re in love with the DS4 and 5. Unfortunately it’s a moot point for us here in the United States, as Citroens haven’t been sold here since 1974.