A classic phrase “The more things change, the more they stay the same“ comes to mind when referencing the work of General Motors’ lead brand Chevrolet. While the plug-in hybrid Chevrolet Volt is still proving to be a tough sell, the automaker has successfully promoted their newest incarnation of their Camaro. In some cases less money than the electric car with gasoline range extender, the Chevrolet Camaro conquers the minds and hearts of American motorists in a way only the Corvette sports car can achieve.

Returning as a happy street performer, the Chevrolet Camaro’s history in competition has been reignited. For the third season in the Rolex Sports Car Series in 2012, the Camaro program seeks production-based GT category supremacy against the likes of the Porsche GT3, Mazda RX-8 and the Audi R8.

At the 2011 SEMA Show in Las Vegas, the proven street and road racing prowess of the Chevrolet Camaro was accompanied by some straight-lining prospects. Taking the form and spirit of the new Camaro ZL1 coupe, a drag racing package for General Motor’s pony car was acknowledged as the COPO Camaro. Shown as a concept of a factory-built drag racing Camaro ZL1, Chevrolet has approved a limited production run of the specialty vehicle. 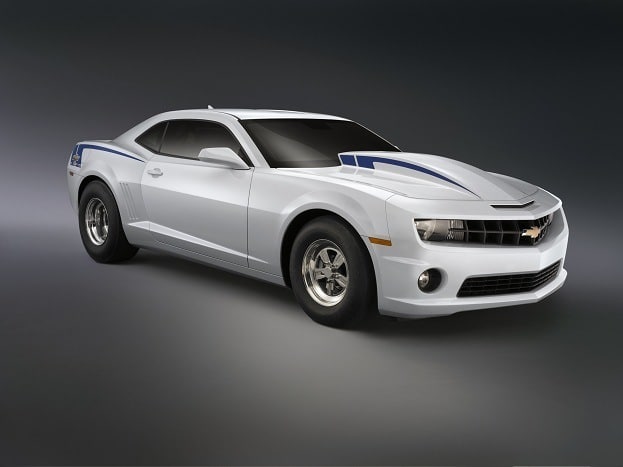 Starting at an $89,000 base price, the 2012 COPO Camaro is intended as a track-only vehicle for Stock Eliminator and Super Stock class competition in the NHRA (National Hot Rod Association). The COPO Camaro will be matched with one of three GM Performance-sourced V-8 engine choices. A naturally aspirated LS7-based 427 cubic inch (7-liter) and two LSX-derived 327 cubic inch (5.3 liter) powerplants will be available on the COPO Camaro.

The 327 cubic inch engines will receive the added boost of high-volume supercharger units of 2.9 and 4 liters. A drag racing-suited Powerguide automatic transmission will be tasked with handling the COPO Camaro’s undisclosed horsepower. Chevrolet has estimated the COPO Camaro’s performance will be enough to send the pony car down the quarter-mile in 9 seconds. Chevrolet’s Central Office Production Orders (well known by the acronym COPO) originally served as the channel for fleet, law enforcement and other services to request special equipment with Bowtie brand products. However, the 1960s explosion in muscle car performance saw Chevrolet’s COPO organization providing some high performance models of the Chevelle, Corvette and most popularly the Camaro.

Built to specific customer orders, most high performance COPO vehicles were released for auto racing with a few entering the garages of astute Chevrolet customers. All 69 of the original Chevrolet Camaro ZL1 produced in 1969 were sourced through COPO.

The COPO Camaro pays the truest tribute to the revived ZL1 nameplate. In 1969, the 69 Chevrolet Camaro ZL1s were only available through the COPO process. Capturing the performance attitude of the first ZL1 model, the 2012 COPO Camaro production will be limited to just 69 vehicles. The future of NHRA production-based drag racing is guaranteed to be electric for through the coming years. Ford redeployed the Cobra Jet name in 2008 and has committed to a new drag racing product based on the 2013 Ford Mustang.

Since 2010, factory-supplied Dodge Challenger Drag Pak provided Mopar fans with a fighter in quarter-mile competition. The entrance of the 2012 COPO Camaro affirms the Detroit Three are willing to still challenge each other in familiar places in the honour of motorsports.