250 Horsepower, All-Wheel Drive: Kia Track’ster is A Soul Unlike Any Other

Looking at Kia’s lineup and its clear it is one for those who don’t want to blend in. Bold, sharp designs that make you love them or hate them. Hyundai’s fluid styling is less polarizing. The Soul is one of those polarizing cars, but what you can’t really deny is its coolness factor. We can’t help but think of the hamsters when we see it either. Now there’s the mark of a successful advertising campaign…..

At Chicago Kia is either offering us a preview of the next Soul (which is a way out) or a new sports model. Lets hope it is the former. As far as funky small coupes go, Hyundai has the Veloster. Kia is left without one, selling the more mainstream Koup. Ditching the four-door layout of the Soul, the Track’ster is, as its name implies, designed for the track in mind. 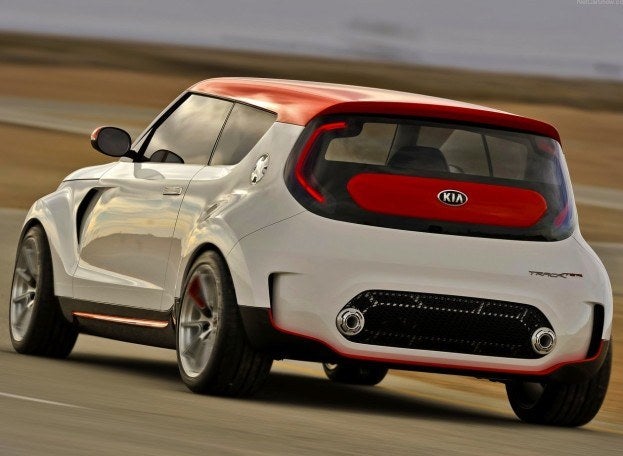 A track-going Soul might have been a laughable thought, but the Track’ster is unlike any Soul you’ve ever seen. Under the hood is a 2.0-liter turbocharged four-cylinder making 250 horsepower. Instead of front-wheel drive, the Track’ster puts power to the wheels through an all-wheel drive system. Its pretty much the concept of a hot hatch and one that has styling win written all over it. The Track’ster is low to the ground and decked out in a white and red color scheme.

The roof is painted in red, and it slants downward to the meet up with the rear C-pillar. It conveys motion, and still should offer a nice amount of headroom back there – if there was a seat that is. For the concept, there isn’t. Instead, the Track’ster has a shelf that is meant for racing gear like suits, helmets, tools and the like.

So is this production or a dream entry? Who knows, it isn’t clear with the Track’ster like it is with most concepts. WIth Hyundai having the Veloster though we think it is a distinct possibility. As for us, we give a resounding yes to whether or not it should be produced. From a styling and packaging perspective we’d rather have this than a MINI Cooper or Fiat 500. We bet it would cost a whole lot less too. Kia design is on a roll!