Leave it to Lexus to deliver me a convertible as soon as it’s too cold to put the top down. Of course, I did anyway, for the sake of testing. Despite looking like an idiot with the top down, both windows up, and the heat on full blast, I had to experience the car in full so I could report it to you, faithful Automoblog readers. Okay now, top up for the rest of the test.

The nice thing about retractable hardtops is when the top is up, it looks and drives like a standard coupe, and provides (almost) the same amount of protection from weather and road & wind noise. If you want a convertible, it seems like it’s the way to go. Of course, they aren’t without their downsides. First, they’re heavy – the IS 250C is about 400 lbs heavier than its fixed-roof sedan cousin. They’re also expensive, and the not-so-pliable aluminum roof takes up extra space when it’s folded up in the trunk. A lot of extra space, actually. To put the top down, you have to open up the trunk and move a cargo cover into the right spot first, reducing cargo room from a decent 10.8 cubic feet to a measly 2.4. Once everything’s in place, it’ll take 20 seconds for the top to fold back and into that 8.8 cubic ft. 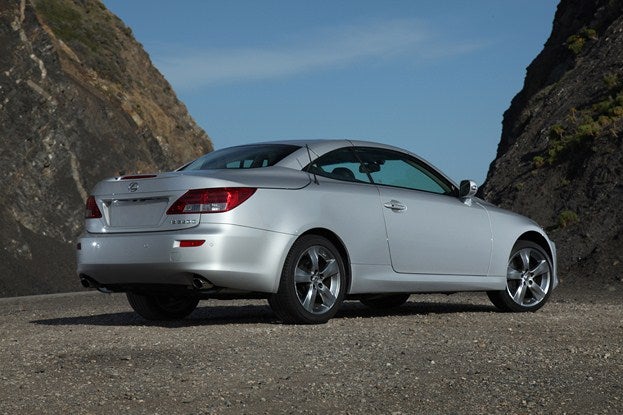 The Lexus IS-series hasn’t changed their styling in a few years, which isn’t a bad thing – it’s a good-looking car. The IS-C lacks some of the sharp lines of the fixed-roof IS and replaces them with a stretched ass-end, throwing some proportions out of order for the sake of the folding top. It’s still a good-looking car, but looks awkward from certain angles. If you’ve always wanted a two-door Lexus IS though, it’s the only way to get one. I would like to see a proper IS Coupe one of these days, preferably via the IS-F. If you’re looking for something a little sportier, you can add plenty of F-Sport options to the IS, including 19-inch alloy wheels and tires, and a big brake kit.

While inside, you’ll get the typical Lexus treatment – a beautifully designed interior, comfy leather seats, steering wheel audio and cruise controls with power tilt/telescope, four power windows, Lexus’ 8-speaker audio system with Bluetooth and USB input, and plenty of other Lexus-y standard features. Our tester came with the Luxury Package, which adds HID headlights, heated & cooled front seats, nicer leather, wood trim, front memory seats, rain-sensing wipers, illuminated door sills, and a power one-touch front seat slide & fold, which I found to be more awkward than useful. Those extras tack on $3,055 onto the base $41,060 for the IS 250C. We also had the navigation system with backup camera and park assist, which added up to another $3,000 or so. A couple other accessories and our total was up to $48,192 after delivery. The touch-screen nav is still the old antiquated unit we’re used to in Lexuses, lagging quite far behind the German competitors in technology and ease of use. 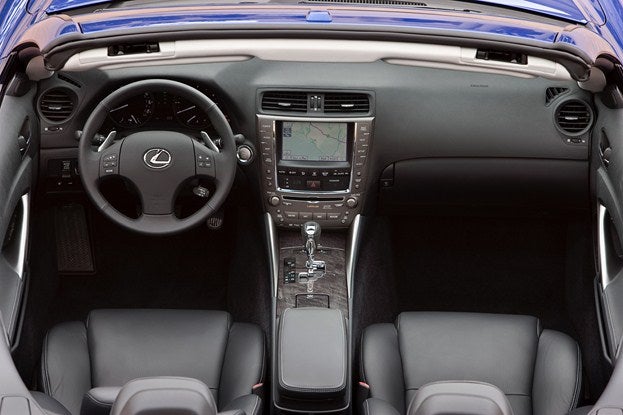 The Lexus IS platform is RWD, which makes for a more pleasant driving experience than an equivalent FWD. Driven aggressively, it can even be fun, although the 350C will be better suited for that than the 250. While the regular IS sedan can be had with an AWD option, the IS-C is available only in RWD, which makes sense, given it’ll likely be driven in warmer climates. Given its drop-top nature, Lexus, as you may expect, did a good job keeping down the noise, vibration and harshness (NVH) characteristics, keeping true to their reputation. When they turned the sedan into a convertible, Lexus engineers changed the suspension to better dampen the ride, and added plenty of sound absorption and insulation materials to keep the NVH numbers down pretty damn close to the sedan’s. 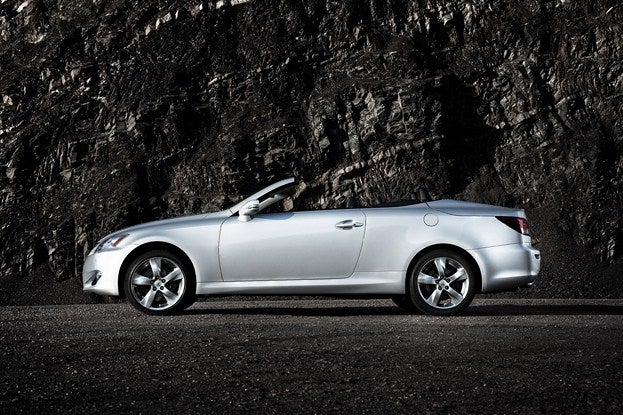 So what are your alternatives? My top picks in this segment are the Audi A5 Cabriolet (soft-top) and BMW 3-Series (hard-top.) Other good choices: Infiniti G37 Convertible, Volvo C70 T5, and Mercedes E-Class Cabriolet. If price is a concern, the BMW and Mercedes will set you back a bit more than the others, in general.

Overall, the 2012 Lexus IS 250 C is a nice ride, and a decent choice in this (seemingly overpriced) segment, with a high-class interior, comfortable ride, and fun-to-drive demeanor.