Hype can either make your break you. Some cars actually live up to it; the Chevrolet Volt and the Cadillac ATS at first glance appear to be two models that have. Others don’t, such as the 2013 Lincoln MKZ Concept.

There has been a lot of rumors about the 2013 Dodge Dart being best-in-class. It is Alfa Romeo based, and it is the first global product developed after the Fiat-Chrysler partnership began. Dodge had the advantage of using an international parts bin to create an all-new entry into this segment.

Previous entries from Dodge haven’t ranked very well – Neon and Caliber come to mind. With a drastically more competitive all-around package than ever before, the Dart should escape that fate. 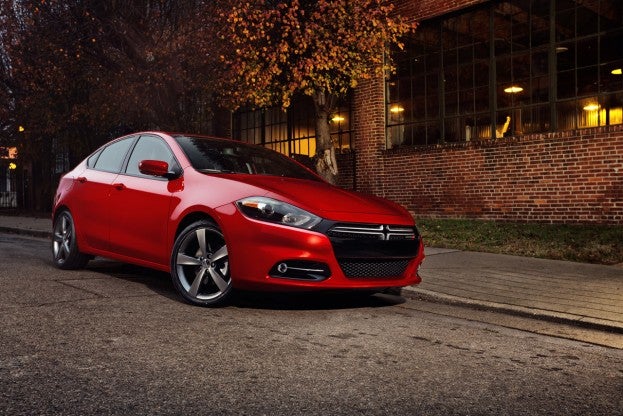 The awkward designs of both cars have been replaced by a much cleaner but still distinctly Dodge look, which offers up no hints of the Alfa Romeo basis underneath. The Dart is based on the Giulietta, but is bigger in a few key dimensions. Unfortunately for Dodge, we have to give the styling win to the Giulietta.

There are some awkward angles on the Dart – the direct front and rear are fine but the profile is not our cup of tea. The R/T, with its darkened headlights, looks the best, but it is the top-shelf trim level. Most of the Darts you see running around won’t be of the R/T variety. It’s just a bit underwhelming.

Part of the reason could be that its so smooth and aerodynamic – almost 1990s in appearance. That is due to an intense focus on achieving a good coefficient of drag. That is all down to providing better fuel economy, so there are trade-offs you have to make to do that. Based on exterior styling, we’d definitely rather have it than the Toyota Corolla or Honda Civic. It just doesn’t best (more expensive) segment leaders like the Chevrolet Cruze and Ford Focus.

Inside, the Dart’s trump card is its lighting and technology. If you so choose the Dart can have customizable lighting in the cup holders, center console storage, foot wells, door handles, map pockets and glove box. The main element is the red lighting that surrounds the upper instrument panel. It is designed to look like a racetrack at night. 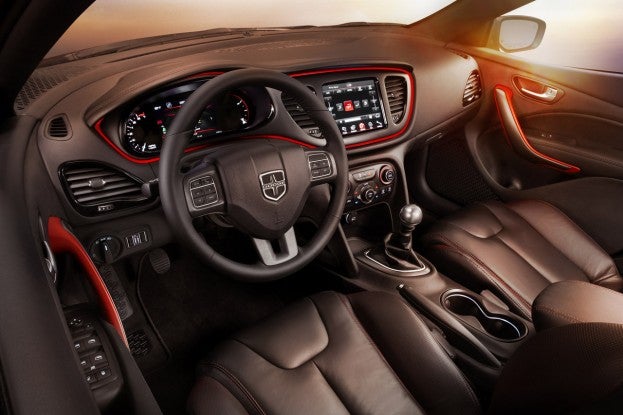 The gauges are customizable if you opt for a 7-inch TFT screen in place of traditional instruments. Moving to the center stack, the Dart offers the largest screen in its class – an 8.7-inch unit with a UConnect infotainment system. The glovebox is big enough to hold an iPad, and the interior can be configured in 13 different ways. Other features unique to the segment include blind-spot Monitoring and Rear Cross Path Detection. While it starts at $15,995, the lighting, TFT screen and center stack screen are options. It’s going to be interesting to see where the Dart comes in when you tick those options boxes.

Dodge is aiming to offer the most customization opportunities with the Dart: there are 12 exterior colors, three engine options, three transmissions and three different wheel designs to choose from. Other manufacturers would do well to follow Dodge’s lead in this area.

Engines include an 160 horsepower 2.0-liter “Tigershark” four-cylinder, 160 horsepower 1.4-liter turbocharged MultiAir four, or a 2.4-liter Tigershark MultiAir 2 four banger. There isn’t much of a swing between them in horsepower, but we’re guessing the 1.4-liter MultiAir will be the fuel economy leader.

Transmissions will include a six-speed manual, automatic or a dual dry clutch transmission. The amount of standard safety and technology features on the Dart is very impressive. Add in class-exclusive features like under-seat storage, a heated steering wheel and safety features like blind sport warning and the Dart is definitely a leader. We just wish the exterior didn’t let it down. The 2013 Dodge Dart goes on sale this June, starting at $15,995.