A meaty part of American automobile sales is conducted through fleet and commercial sales. Consisting of vehicles being ordered in bulk by sales and service businesses, these purchases can prove to be a vital lifeline for some vehicles as well as the manufacturer in general. The Ford Crown Victoria (now selling in its final year of a fleet-only vehicle) had fallen out of favour of many individual motorists years ago but continues to be appreciated by law enforcement and taxi companies. The steady fleet demand of the Crown Victoria played a part in minimizing Ford Motor Company’s losses prior to the present day resurgence. As probably the leading example of how important fleet vehicle sales can to, auto company Checker which ran 60 years reliant almost entirely on taxi cab services.

Involved in commercial vehicle production in regions around the world, Nissan began to openly express interest in the lucrative United States commercial fleet market by 2008. Showing off a gigantic concept van sporting a wide range of applications from construction to mobile office, the full-size Nissan NV production series debuts for the 2012 model year eager be seen as a capable work vehicle.

Constructed within a total length of 240.6 inches, the Nissan NV commercial vehicles out-reaches the Mercedes-Benz Sprinter in proving itself as the most capable cargo hauling van on the North American market. Sporting a truck-style hood as opposed to the more shortened nose common to many work vans, Nissan’s 4-liter V-6 or 5.6 liter V-8 engine are given a more serviceable access by mechanics. Unfortunately for hard core power seekers, no diesel powerplant exist in this initial year of the Nissan NV.

Because of the positioning of the engine, a front interior Nissan described as a “pickup-like cab” lends added cabin room allowing the 2012 Nissan NV to acquire greater space utilization. High seat positioning and abundant legroom are characteristics preach a professional feeling up front. The NV’s passenger seat can be folded forward into a flat table well-suited for on-site work duties.

Starting at the front of the cabin, cargo space is thoughtfully used as evident in under seat storage drawer and available lockable center console bin capable of holding loads as large as a laptop computer. In the Nissan NV’s dedicated cargo area, lighting and a wide variety of load tie-downs are presented for easy access for the ingress and exit of large items such as plywood. With up to 323.1 cubic feet of cargo space available, 2012 Nissan NV provides considerable space for fitting much of the tools and supplies needed at a work site. Realizing the specific needs of commercial industries requires a prospective work vehicle to be capable of ideal augmentation, the 2012 Nissan NV commercial vehicle has been built with aftermarket customization in mind with roof attachment point and upfitter pre-wiring. 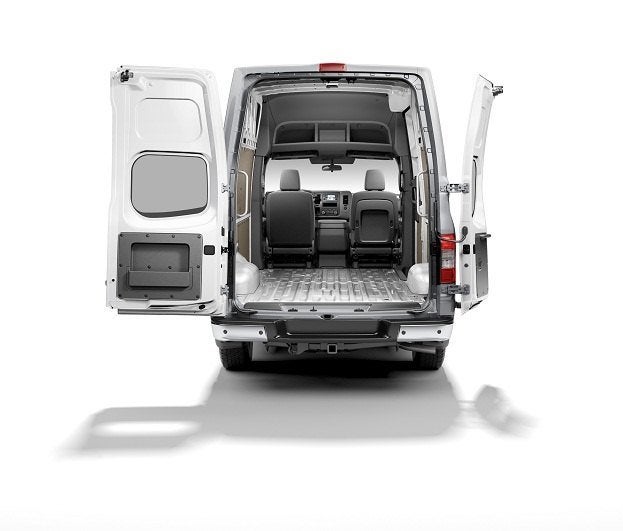 In preparations for limited release amongst a limited number of Nissan Commercial Vehicle dealerships across the United States, the NV commercial vans will enter production at the Canton, Mississippi facility. The site of assembly for the Nissan Titan pickup truck, the positioning for United States manufacturing of the company’s newest commercial is certain to play a favourable role in attracting more nationally-patriotic businesses who will look beyond the vehicle badging. The expansion of new vehicle production at the Canton plant would also be a welcomed potential boost to employment in Mississippi state.