Ok enough with the jokes

The Dodge Caravan has been a popular vehicle for growing families since its debut in 1984. The grocery hauler has been popular for its class-leading interior conveniences and its ability to transport kids and cargo. While most guys poke fun at the minivan, it continues to be a great family vehicle. This week we’ll check out what makes the 2012 Grand Caravan a good choice for families.

Last year, the Grand Caravan was lowered one inch; it got a sportier front facia, a new Dodge crosshair grille, and a slightly reshaped hood and quad headlights. The rear received new Dodge lettering on the liftgate, new LED taillights, and a body colored roof spoiler.

You don’t buy it for its looks

The 2012 Grand Caravan receives a few minor changes in trim levels and a new, lower-cost base model called the American Value Package. This week we’ll be testing the 2012 Caravan SXT. We’ll start with the interior since that is why so many families buy them. There is only so much you can do with a box, so we’ll just concentrate on the inside.

Up front, the Grand Caravan has all-new fabric on the seats, extra soft touch materials throughout adding more luxury even though the dash is still hard plastic which is characteristic in the minivan segment, but not a bad idea since kids touch things with their dirty hands.

This SXT tester came with a telescoping steering wheel with trip computer, phone, audio, cruise control, and, when ordered, navigation controls. Moms will love the convex conversation mirror that allows for seeing the kids in the rear without having to turn around.

The 2012 Grand Caravan also offers lots of storage up front, two cupholders, and a covered shallow tray. The rear passenger area is equipped to handle just about any need that a growing family will have. Now the only thing needed is a restroom in back.

Stow n’ Go is the advantage

The Dodge Caravan still holds the advantage among the competition with seats that with the pull of a lever, can be stowed in the floor bins below. This system called Super Stow ‘n Go allows for both second and third-row seats to be folded flat into the floor.

The system works flawlessly and in just a couple of minutes the kid’s hauler is transformed into a cargo carrying work vehicle for dad. The cargo area inside with the seats out of the way while not class-leading is 143.8 cubic feet of space; large enough to transport a couch or a 4X8 sheet of plywood.

The Grand Caravan can be ordered with power side doors and a power liftgate for a $1,300 premium; well worth every penny if mom walks up with an arm full of groceries and a baby. The controls are conveniently located on the key fob and on the headliner between the front seats and perfect for families with small children.

Families will be interested in keeping the kids entertained and the Grand Caravan offers plenty of things to keep the kids occupied and quiet. The first option is the available Entertainment Group with DVD entertainment system. The system turns the Dodge Grand Caravan into a rolling family room on wheels. The system is easy to play; just put in the DVD, press Play, and it works; the screen drops down from the ceiling and the viewing begins.

The system comes with wireless headphones for rear seat passengers so that the driver can concentrate on the road without being distracted. The system also comes with jacks for the kids to plug in their favorite video games.

While on the road, the 3.6-liter Pentastar V-6 engine in the Dodge Caravan delivers increased power over the previous model. The new engine also delivers improved fuel economy. EPA estimates are 17/25 city/highway.

Like all minivans, the Caravan is a big vehicle and that translates to a smooth ride. For the 2011 model year, the ride height was dropped one inch and the suspension has been completely retuned for a better handling. The Blind Spot Monitoring and Rear Cross Path systems are also available to keep families safe.

The new 2011 Grand Caravan offers everything the kids need to keep the family happy and will get them there safely too.

Check out the “It’s the dads life” video. 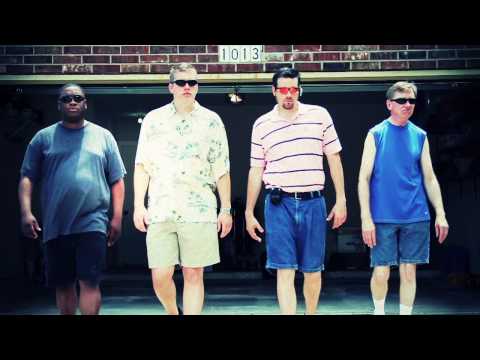