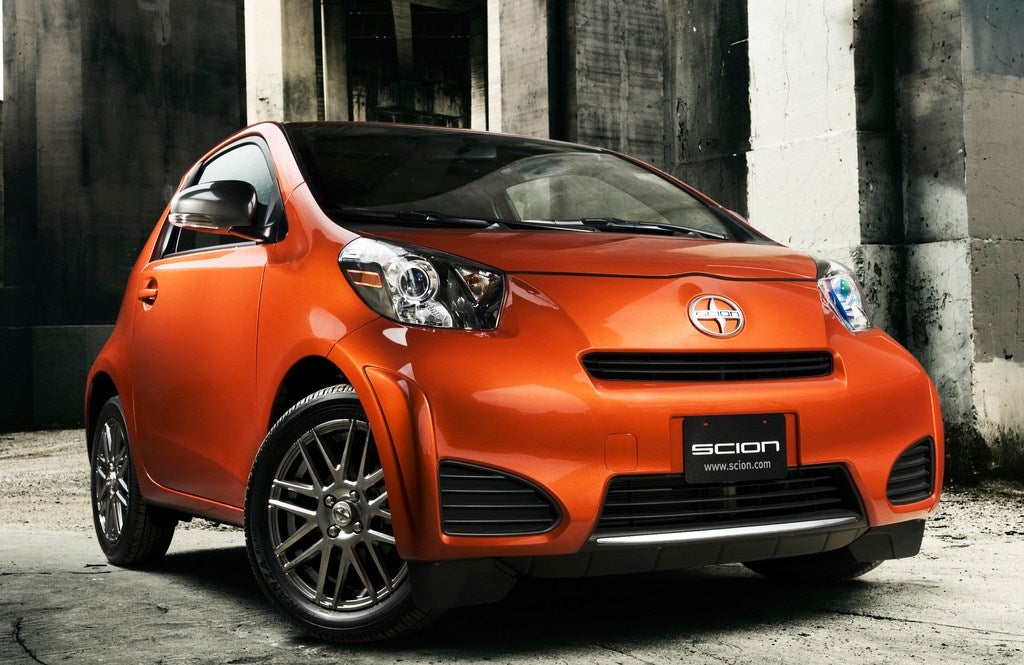 And so the micro-car wars begin. Here in the States, anyway. They’ve had city cars (as they call them) in Europe for decades, but only recently have they caught on in the States, as we push for cars with higher and higher MPGs. Hybrids have been around for a while, but they’re expensive, boring, and frankly, usually don’t provide much of a benefit in the long run. They’re more of a temporary solution. EVs still have a long way to go, and diesel cars still have a while to catch on over here too (for reasons I don’t understand.)

So along comes Smart. A quirky little sub-brand of Mercedes that makes these micro-subcompacts (this segment’s official classification.) Americans seemed to take to them pretty well, filling a small niche sitting below subcompacts like the Toyota Yaris. Italian brand Fiat saw what was going on and brought over their 500 micro-subcompact in 2010, selling a decent amount, judging by how many I see on the road. Seeing room to give Americans another, cooler option, Toyota decides their few-years-old (in Europe) iQ micro-car could be brought over here, but they’ll sell it as a Scion and market it to young urbanites who regularly deal with tight parallel parking and narrow roads. 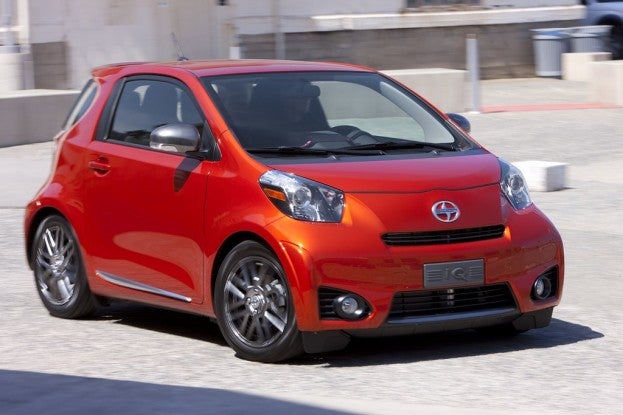 As the new Scion iQ (Scion’s fourth model) launches in the States, Scion invited some of us down to Palm Beach, FL to listen to them talk about it and take one for a spin. After a grueling first day full of delays, spending just under 12 hours either in the airport or plane (meaning from Raleigh, NC I could have driven there faster,) I grabbed a $16 patty melt and $14 martini (it is Palm Beach) for dinner from the hotel restaurant and was out like a light within the hour. After breakfast, we sat through a product presentation, then stepped outside to the 11 iQs they had lined up to see what the car is all about. 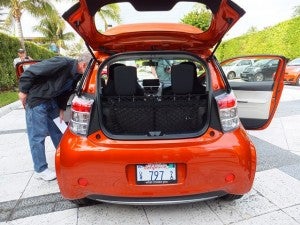 The iQ is strikingly small (it is a micro-car after all.) Wheelbase and body length are so close it’s scary, with the front and rear fascias ending only a few inches after the tires. Total length of the body: 10.1 ft – shorter than Fiat, but a foot or so longer than the Smart. To make up for some of that, it’s 5.5 ft wide (wider than both,) which shows when viewing the car from the rear:

It’s a cool-looking car, fitting right along with Scion’s youth-oriented design philosophy. Somehow, it avoids that awkward “smooshed” look its dimensions would suggest, and replaces it with a bit of aggression thanks to its wide stance and slick design.

Engineers of the iQ worked overtime maximizing interior volume, moving the compact A/C unit behind the center stack, giving the car an asymmetrical seating layout with the front passenger sitting slightly ahead of the driver. It gives the iQ a 3+1 seating arrangement, meaning it’s got room for three adults and an infant or amputee. Other space-saving techniques they used was using slim seatbacks, placing the 8.5-gallon fuel tank underneath the driver and right-rear passenger, and using a high-mount rack-and-pinion electric power assist steering setup. Fitting anything larger than a couple bags of Oreos behind the rear seats would be a feat, so they fold down 50/50-style with a “trunk mat” already attached to their backs, bringing cargo room up from a whopping 3.5 cubic feet to a useable 16.7. 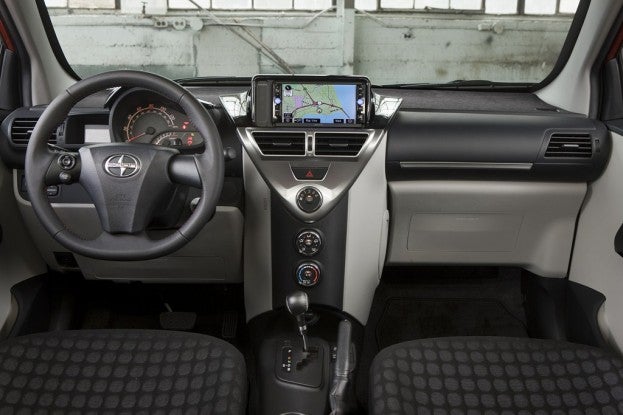 My chubby 6’4″ frame fits into it without any awkward contorting or adjusting. The driver’s seat goes all the way back for me and touches against the front of the rear seat. More like a 3+0 if anyone over 5’6″ tall is driving. The car’s 4.9 ft height gives me a few welcome inches of headroom. The sporty flat-bottomed steering wheel tilts but doesn’t telescope, and comes standard with red stitching and audio controls. Sitting shotgun gets you some extra room to stretch out with the seat back and forgoes a typical glove box with a cheap-feeling plastic drawer under the seat. A single cup holder in the center console, one in each door, and a small cubby under the center stack provide the only other storage up front. Inside that cubby is a single 12V power outlet for accessories. In a car meant for the youngins, it really should have at least two, what with their music players and navigation screens, and Pac-Man video games. A standard auxiliary and USB input give you the ability to hook those MP3 players up to one of the iQ’s three head units. The iQ’s extra width is more than welcome, keeping occupants from getting that tiny-car claustrophobic feeling, seating more like the Corolla. I’d go so far as to say it feels almost spacious up front.

But the real question is how does the little guy drive? Not how you’d expect a car this size to drive. That is to say it’s competent and stable at speed, and reaching 80 mph on the highway doesn’t scare the crap of you. Taking turns a bit too fast doesn’t feel like you’ll tip over, either, thanks mostly to the width of the car and lowered center of gravity. Maneuvering is quick and precise, as you’d expect, and parking is easy. With a turning circle just shy of 13 ft, driving in tight circles feels like the car is pivoting on the rear wheel. The iQ’s 1.3-liter engine only puts out 94 horsepower, but it’s also only carrying 2,127 lbs, plus you. It’s no Aston Martin, but it’s responsive and has plenty of kick for most needs. The Scion iQ is only going to be available with a Continuously-Variable Transmission (CVT) – unfortunately there won’t be a manual gearbox option. The CVT isn’t bad (and I normally hate CVTs,) but I’d still like to see it with an available stick. My only other complaint about the driving itself is the steering’s numbness and lack of feedback. Oh, and cruise control isn’t available. At all. Yeah.

RELATED
2020 Toyota RAV4 Hybrid Review: Easy On The Gas, Hard On The Eyes The combination of the tiny engine, efficient transmission, and light weight allow the iQ to get 36 mpg in the city and 37 on the highway – that’s getting into hybrid territory for much less money. The 2012 Scion iQ is $15,995, including delivery, and since Scion is monospec (no trim levels or packages,) it comes well-equipped and your only extra cost will be any accessories or changes.

The 2012 iQ is available in the western states now, and on-sale dates for the rest of the country are expected in the first quarter of 2012.

The Scion iQ’s main competitors are the Smart forTwo and Fiat 500, with the Mini Cooper being considered a solid “ehh…maybe.” Scroll down for a big photo gallery. 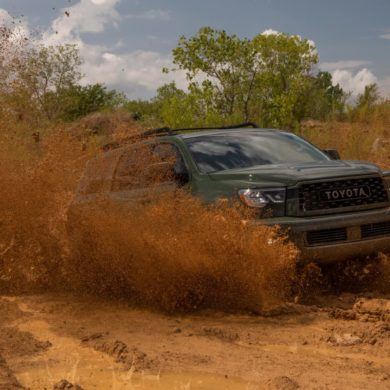