Initiated by the Maserati Quattroporte and Mercedes-Benz CLS vehicles, the modern four-door coupe phenomenon had become a segment catering to premium sports car lovers wanting an equal amount of sedan sophistication. With Audi, Porsche and Aston Martin joining the four-door coupe class, a notable absence has been BMW. Displaying a car at the 2010 Beijing Motor Show called the Gran Coupe Concept, the German auto company wasted little time after the vehicle’s first exhibition to develop the BMW 6 Series coupe and convertible. In time to be a 2013 model, the road-going BMW 6 Series Gran Coupe sends a message that the automaker long known for building “The Ultimate Driving Machine” was not going to shy away from the sportier four-door persona.

In applying a design where two extra doors would be incorporated on the newly-released BMW 6 Series, designers of the 6 Series Gran Coupe were challenged to properly represent a sport sedan needing to look more aggressive than the 5 Series. The BMW 6 Series Gran Coupe is instantly a distinct sight with the longer-arching roofline. The rear door windows shorter appearance magnifies the sport coupe persona on this latest BMW offering. Employing all the subtle design touches of the two-door 6 Series, the model specific headlamp housings as well as the performance car front fascia transitions into a body shape featuring aggressively chiselled side contour lines. At the rear, a straight-flowing rear bumper and a brake light bar traveling across the full width of the rear window invokes the 6 Series Gran Coupe’s racy composition. Accomplishing the looks of a four-door coupe, BMW insures that a well-equipped 6 Series Gran Coupe will have the ingredients to perform the sports car role. For the North American, two gasoline powerplant choices optimized by BMW Valvetronic, TwinPower Turbo and direct injection technology will be found underneath the 6 Series Gran Coupe’s hood. The BMW 640i Gran Coupe model will offer the brand’s N55 3-liter, 315-horsepower inline-six engine. Launching the car in a formidable 0 to 62 mile per hour acceleration time of 5.4 seconds, the BMW 6 Series Gran Coupe is electronically limited top speed of 155 miles per hour. A late arrival into the four-door coupe marketplace, the BMW 6 Series Gran Coupe has coupled the ingredients for what is certain to be an all-out German automaker fight between the Audi A7, Volkswagen CC and Mercedes CLS-Class. 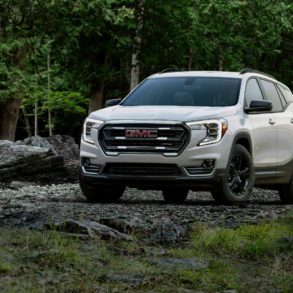