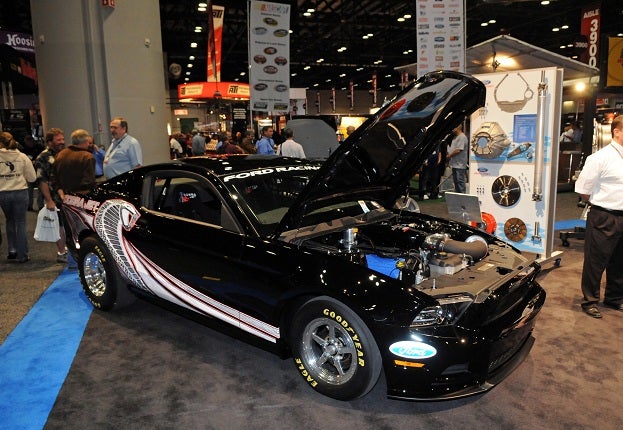 Through the 1950s and 1960s, American automakers ambition to beat each other on the sales charts saw race tracks staging some of the fiercest battles in auto racing history. Muscle car era icons like the Chevrolet Camaro Z-28 and the Plymouth Superbird were specifically designed street cars purposed to wage combat in motorsports. When the Ford Mustang debuted in mid-1964, the pony car arose to be the blue oval brand’s vanguard in auto racing activities. The original Ford Mustang Boss 302 was unleashed as a weapon inside the popular SCCA Trans Am Series. Piloted by drivers like Parnelli Jones, the Mustang Boss 302 remains a cultural symbol identified for road racing.

Commanding respect on the twists and turns of many racing closed-course road circuits, the Ford Mustang Cobra Jet was unleashed as a straight-line competitor. In 1968, a total 50 Cobra Jet examples were produced and quickly emerged as a force to be reckoned with in stock-based drag racing. As Ford Motor Company brought the sizzle back to the Mustang with their 5th generation vehicle in 2005, the Cobra Jet name would return as a limited edition model for 2008. Twice more in 2010 and 2012 model year, the Ford Mustang Cobra Jet would be released as purpose-built drag racing vehicles.

Presented on the restyled 2013 Ford Mustang shown ahead of the 2011 Los Angeles Auto Show, the fifth reboot of the Cobra Jet nameplate was made at the Performance Racing Industry trade show in Orlando, Florida. 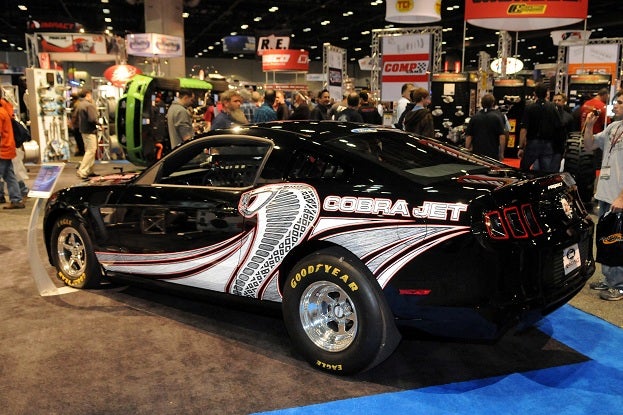 The 2013 Ford Mustang Cobra Jet features a cockpit ideal for living life one quarter-mile at a time. Providing safety and structural rigidity from a carefully designed roll cage, a drag racing pilot in the 2013 Mustang Cobra Jet will strap into fiberglass-constructed Recaro FIA racing seats said to be designed for the extreme rigors of motorsports.

While the 2010 and 2012 Cobra Jet models utilized the 5.4 liter displacement engine based off the SVT Mustang, Ford’s newest edition of the drag racing special presents downsized powerplants utilizing the storied 5.0 liter V-8 configuration. Presenting the option of naturally aspirated power or the extreme performance from a Ford Racing/Whippie supercharger, the cylinder and manifold for the aluminum block 5-liter V-8 engine is precision machined using a CNC production process. Details of the power output from the 2013 Cobra Jet powerplants has not been released (Ford was also tight-lipped on the 2012 Mustang Cobra Jet). Ford Racing had pegged a supercharged engine for the 2010 Ford Mustang Cobra Jet at 475 horsepower. With 50 examples of the 2013 Ford Mustang Cobra Jet, pricing for the upcoming vehicle starts close to double the price of a 2012 Shelby GT500. The naturally aspirated-engined 2013 Cobra Jet runs at $85,490 while the costlier supercharged version is priced at $92,990. Ford Performance Parts will tout a series of optional parts and components to potential buyers in January for the new Ford Mustang Cobra Jet guaranteed to inflate the vehicle‘s price tag. The first of the 50 cars comprising the 2013 model year Mustang Cobra Jet release is slated to roll off the AutoAlliance International facility at Flat Rock, Michigan in June of 2012. As early as late next year, it may be possible to see the 2013 Ford Mustang Cobra Jet in competition in NHRA Stock and Super Stock categories.

Even before the key for the first 2013 Mustang Cobra Jet is transferred into the hands of drag racers, fans are given an opportunity to interact with the 2013 Ford Cobra Jet through a vote. Given the choice between exterior colours classic white, silver or black, the 2013 Cobra Jet appearance will be determined by an on-line vote ending on December 31st 2011. Blue oval racing faithful can cast their choice shade through the Ford Racing Facebook page or the Ford Racing Parts website.