When a vehicle is crucial to an automaker’s success, usually big risks aren’t taken. Playing it safe is a lot more common of a plan. Witness, Toyota’s redesign of the 2012 Camry. With the Ford Flex, playing it safe wasn’t in the plan. From the outset, the Flex has been a polarizing design. Despite that though, Ford had lofty ambitions. It originally was shooting for 100,000 units of the Flex per year.

The Flex has sold a lot less than that, but in a different way than Ford intended. Ford primarily sells high-end models of the Flex for those looking for something different. The Flex has a small, loyal customer base. Looking for increased volume, Ford recently brought out the Explorer to, which has performed brilliantly. Thanks to platform sharing, the Flex still has a place in Ford’s lineup. For 2013, the Flex gets an update that focuses on technology and making it further stand out from the pack.

When it debuted, the Flex was meant to be one of the first products that showed Ford was really “getting it”. That meant a design that featured the company’s bold, American face with a three-bar grille. Ford is starting to move away from that now with a new “One Ford” look that is more international in approach. That new design language was shown by the Evos Concept.

The Flex is not an international product, but it has ditched the three-bar grille as well. It now has a singular chrome bar that stretches across the front end, helping to visually increases the width of the Flex. It makes a strong statement, with a post-modern look. You’ll notice the Ford blue oval is gone, replaced by large “FLEX” badging that sits above the grille.

The Flex’s technology package has gotten a significant upgrade. The seven-seat crossover adopts MyFord Touch (which includes an all-new instrument cluster), as well as collision avoidance, rain-sensing wipers and Ford’s industry-first seatbelt airbag system. The base 3.5-liter V-6 engine now makes 285 horsepower, up 20 from last year’s 265. Mileage is increased by 1 mpg, and the EcoBoost V-6’s power output is carried over. Post-modern best describes the Flex’s look; it is thoroughly modern with a nod to the past. Somehow we think if you didn’t like the Flex before, you still won’t now though – and for Ford, that’s OK. 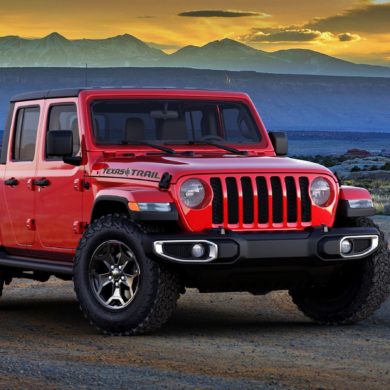