Nearly every mention of DeLorean and the DMC-12 must include an obligatory reference to “Back to the Future.” Few cars have a movie so inextricably linked with their public perception and history. That has a large part to do with the DeLorean’s relative obscurity to most people before it was placed in the film.

Nostalgia from that and has fueled an industry around the car that remains to this day. DeLorean Motor Company, located in Humble, Texas, has capitalized on this, being in business since 1995.

Currently, the company restores old DeLoreans and offers new ones as well. The “new” DMC-12s are built from DMC’s huge supply of parts and tooling sourced from original DeLorean Motor Company. 41 rebuilt cars have been sold so far. In addition to working on the vehicles themselves, the company sells replacement parts, merchandise and accessories. Attempts to access DMC’s site today failed, likely due to all the traffic surrounding their latest announcement, which was unveiled at the International DeLorean Owners Event according to Your Houston News.

The new car is an electrified version of the DMC-12, adding a futuristic twist to the car that will give it an undeniable cool factor. Stephen Wynne, owner of DMC, says the company has been working on it for four years. He said “what we [showed] tonight is major leaps forward….we have had a few incremental updates over time, but as far as substantial updates go, it’s been 30 years.”

It isn’t clear if the car being developed is all-new though; DeLorean hasn’t released any images or given much more information about it. What we do know is that it will have a top speed of 125 mph and offer 260 horsepower.

Toby Peterson, who owns a DMC dealer in Seattle, Washington said “A lot of people consider the styling of the DeLorean timeless……it was state of the art 30 years ago, and it looks state of the art now. It’s a style that has transcended the decades.” It is no doubt an iconic car, and the fact they are doing this is quite brilliant we think. Fans better be prepared to shell out a significant sum for the electrified DeLorean though. Starting in 2013, DMC plans to offer it at a price of around $90-100,000. 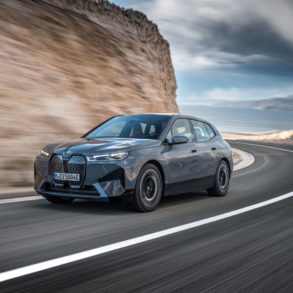