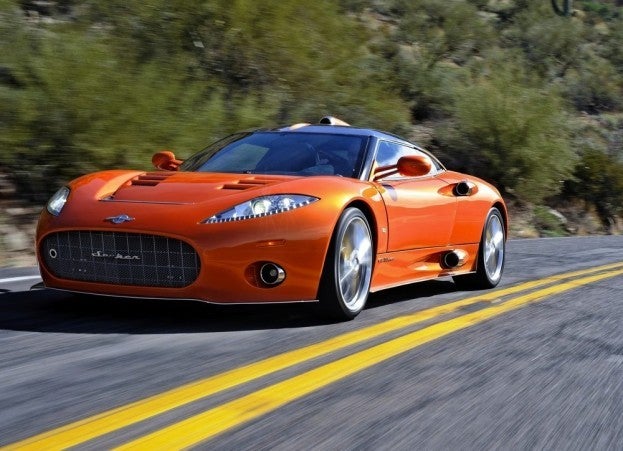 One of my favorite super cars would have to the Spyker C8 Aileron. It is just so different, with classic styling that takes cues from Spyker’s airplane history. While the previous C8 Laviolette was meant to evoke prop-driven planes, the C8 Aileron took inspiration from jet planes. Both are mid-engined, exquisitely-crafted and powered by Audi V-8 engines.

Spyker burst onto the mainstream news scene more than ever before by purchasing Saab. Spyker, which makes only around 30-50 cars per year, trying its hand running a volume brand like Saab? Many said it just wouldn’t work, and given the difficulties Saab has experienced so far it seems that has proven correct. Though there are some parallels between Saab and Spyker – both have aviation history and are undeniably quirky entries in the segments they compete in. The deal with Saab was supposed to mean more of a presence in the United States for Spyker, such as selling Spykers through Saab dealerships. Given financial problems, Chief Executive Officer Victor Mueller and team have focused on one thing: Saab. Makes sense, but Spyker needs focused management – it has potential. North Street Capital, LP of Connecticut seems to agree, as The Financial Times reports the private equity group has purchased Spyker. The sale should provide a bit of cash for Saab, although likely not a very large amount. Details about the sale have yet to be released.

Previously to working out this deal with North Street Capital, Saab was looking to sell Spyker to CPP Holdings, which is owned by billionaire Russian investor Vladamir Antanov. Talks with CPP fell through. CPP was looking to produce Spykers at a former Jaguar plant in Coventry, England. Instead, Antanov is funding production of the new Jensen Interceptor GT, which will take place at the Conventry plant. Apparently Antanov is very keen on getting in the automobile business. We don’t blame him; if we had that kind of cash to throw around we would too. Anyhow, this means the C8 Aileron is going to stick around, at least for a while. We’re really excited about that. So much so we’ve made a gallery showing some of our favorite shots of the little-known Dutch beauty. Enjoy!