What the Hell are Magnetorheological Shocks? That was the first thought I had when my husband and I were having a conversation the other night about the 2012 Chevy Camaro ZL1 and he told me about the Magnetorheological shocks. So, before I could even begin to look at the mechanics of the shocks, I had to learn how to say it. I watched the test track video about the shocks numerous times before understanding that the man was saying “Magneto-rio-logical” shocks. Mangneto means just what you think it does; a magnetic force or electromagnetic flow. The “rio” part is short for rheology, or the study of fluids in semi solid states. And logical is the smart or computer component of the equation. This, in reality, is a thirty dollar word for a shock filled with a smart fluid that can be controlled by an electromagnet which in turn is controlled by sensors and a computer. Ok, so their word is cooler and more concise than my definition, but they mean the same. 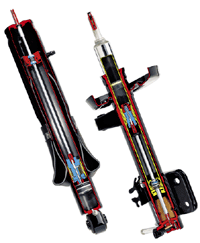 The magnetorheological fluid, or MR fluid, to save my fingers from exhaustion, is really comprised of suspended particles in oil. It will act like any other oil under normal operating conditions, but add a little electromagnetic stimulus and like tequila on a hot summer night, strange things start to happen. Ok, not so strange if you understand magnetism, but just as exciting as the tequila.

When an electrical current is sent through the fluid, the particles align with it to temporarily turn the viscous fluid into more of a solid, just like Jose Quervo can talk seemingly conservative individuals into dropping their guard and going with the flow. See, the electromagnets are aligned with the shocks walls so that as the need for stiffer suspension is called for by the cars computer the magnetic flux (or signal between poles) runs parallel through them, forcing the particles into fluid barriers.

Let’s go back to our wild tequila infused scenario. You are at the club with thirty minutes left to find Mrs. Right Now and the pressure is on. You check your breath and your hair and decide it’s time for your “A” game. You see her from across the smoke filled room and you move in, just to have Random Joe step in between the both of you. You and that special lady have a great magnetic chemistry going, but Joe there, excited by that force stays in between you both slowing the exchange of drinks, small talk, and all fluids. Now transfer that idea to the shocks filled with MR fluid and you see the similarities.

For the more technical people out there, I will say this: the electromagnetic flux travels perpendicular to the flow of viscous fluid, between two poles, so that the particles suspended in the fluid align parallel and prevent its flow, essentially decreasing the suspension fluids viscosity until the point of magnetic saturation and a quasi-solid state has been achieved. Whew… I prefer the bar analogy myself.

But what does this have to do with not only the Camaro, but also Audi, Acura, Holden, Ferrari, and a host of other GM products? “A track ready car straight from the factory,” according to the team that set up the Camaro ZL1. The introduction of the MR fluid to the suspension systems of high performance sports cars is allowing for instantaneous feedback from the vehicle with a stiffer shock when it matters to a more fluid, luxury car shock when you want to just ride. Everyday isn’t track day and the vehicles that utilize this technology will be able to discriminate between the two.

This ground breaking technology isn’t without its potential drawbacks. The consensus is that the particles will, over time, will settle out of the oil. Currently, MR fluid is expensive, so it is believed that the replacement of shocks containing this type of smart fluid will also be expensive, but no one really knows how long it might take for this separation to occur since not everyone will be testing the quarter mile. The fluid is also heavier than a more traditional shock, but not so much that it will significantly increase the gross vehicle weight. Also, after prolonged use the fluid may thicken, again replacement is the only cure.

What should the average consumer do to prepare for the integration of these technological marvels into their driving experience? I think nothing. Unless you can afford an everyday racer like the Corvette or the 458 Italia, you may never see these as factory options. You may one day be able to add them onto your modified rides, at a premium I’m sure. However, the requirements of the common driver will not be such that we will see them pop up on grandma’s minivan, unlike tequila, which could creep up on any of us without warning.