Gordon Murray Makes an EV the Way Someone Should: Light & Fast Leave it to Gordon Murray, the man behind cars such as the McLaren F1, the Light Car Company Rocket and world stomping Brabham F1 cars to design an electric car that finally gets it right. Yes, yes, I know, the Tesla Roadster. Let me just start off by saying that I think Tesla’s Roadster is a great car. Fast, looks nice, fast, has decent enough range, and it’s fast. The only real problem with the Tesla Roadster is that it weighs a lot. For all it’s sportscar aspirations (and it is most definitely a sportscar) it’s more than a little on the porky side given its size and weight.

Gordon Murray, like Colin Chapman, Vitorio Jano and Rudolf Uhlenhaut before him, understands that weight is a sin in a performance car. And Murray, like any of us gearheads out there, also knows that when it comes to performance, the real bug-a-boo with an electric car is the weight of the damn batteries.

No problem said Gordon (or something along those lines). Mr. Murray and his business, Gordon Murray Design, were able to design and build the car you see here: The TEEWAVE AR1 Boasting a carbon fiber-body, this roadster is as lightweight as it is good looking. The TEEWAVE AR1 tips the scales at a measly 850 kilograms, and that INCLUDES the 250 kilogram lithium-ion battery. That means the TEEWAVE AR1 weighs about what a Lotus Elise does and it beats the Tesla Roadster by a whopping 400 kilos and the Nissan Leaf by around 700 clicks. Say hello to Our Lady of The Blessed Acceleration. 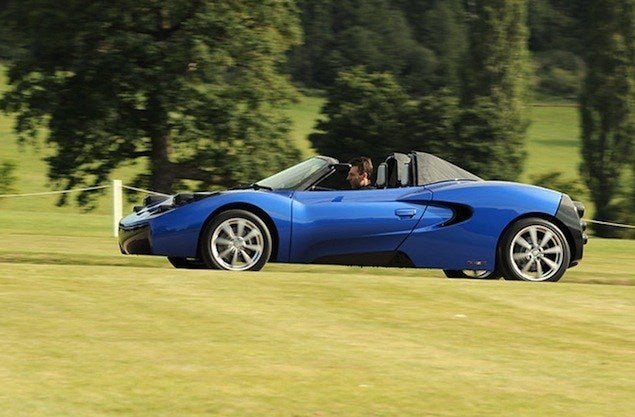 This was not just a Murray idea though. The TEEWAVE AR1 was custom-built for a Japanese chemical firm called Toray. It seems that Toray is big into the manufacturing of carbon fiber and carbon fiber-reinforced plastic, so they wanted Murray to showcase the potential of the groovy material in mainstream automotive applications. Toray hopes to see automakers using such materials widely by 2015. And frankly, so do I.

Because, you know, keeping the weight down will turn out to be more and more vital as carmakers struggle to reach tightening fuel economy and emissions standards. Smaller, lighter vehicles require less energy to move yadda yadda yadda, just do the math. And, as it turns out, the benefits are even bigger for electric vehicles. Gordon says every kilo shaved from an electric vehicle saves between $23 to $31 in battery costs because you need less energy to accomplish the same range.

The TEEWAVE features a carbon fiber monocoque and aluminum subframes along with some trick carbon fiber crash zones. There are three sections for the car (very similar to the overall architecture of the McLaren MP4-12C road car), and Gordon Murray Design says the carbon fiber components can be manufactured in less than 10 minutes. The entire car, from concept to completion, was built in just nine months. I’ll pause here so you can let those figures sink in. Thankfully, the TEEWAVE is a little bitty car at just 13 feet long and 5.7 feet wide, making it almost exactly the same size as the Roadster or an Elise or a Miata. Sources speculate that the drivetrain components are from the Mitsubishi i-MiEV, which would jive with the announced specs of the TEEWAVE. The car packs a rather small 47 kilowatt (63 horsepower) electric motor and a 16 kilowatt-hour lithium battery, which provides a stated range of 114 miles and a recharge time of six hours.

“A great deal of attention has been given to the low weight, low center of gravity and suspension geometry which has resulted in an excellent ride and handling balance,” the company said.

Okay, so it seems like a good design, but it does leave me asking one question: When you going to produce it in large numbers Gordon?