It was barely a month ago, during my review of the new-for-2011 VW Jetta SEL, that I was getting antsy about Volkswagen taking too long to release the high-performance version of their mid-size sedan. Well, it’s finally here, and it rounds out the Jetta lineup pretty damn well, if you ask me.

Last year, VW completely redesigned the Jetta into a car that now more closely resembles the Passat than the Golf, and even looks a bit like a German luxury sedan. Introduced with one good gasoline engine, one not-so-good one, and a fantastic diesel powerplant, I’d call the new Jetta a huge win for VW. And so, apparently, is the American car-buying public; they’re selling like mad. Enthusiasts, however, have been left in the cold with the new model. That is, until now.

The all-new 2012 VW Jetta GLI includes a massively upgraded turbocharged 2.0-liter four-cylinder that produces 200 hp and 207 lbs/ft of torque. Doesn’t sound like a lot, but it really does feel like more power than the numbers suggest. Aided by a standard six-speed manual transmission (gotta love VW for putting sticks in every trim level,) or you can opt for the best “normal” automatic transmission us middle-class can buy – VW’s six-speed DSG with paddle-shifters – for an extra $1,100. Our test model came with the DSG, and while I’m typically a big fan of this transmission, it didn’t feel quite right in this car.

Under normal driving, the combination of the DSG’s urge to shift RIGHT NOW (a very good thing during spirited driving) and the engine’s turbo lag (which is noticeable) make for a jerky and uneven drive at lower speeds. Taking off under light or normal acceleration from a stop, for example, is downright awkward until you get used to it. I’ve taken the only sensible solution to the problem: drive like I’m being chased, constantly. The turbo lag is actually very noticeable. My solution? Launch control. Wait…no launch control? Lame. Still, the car’s surprisingly fun to drive hard. In addition to the fun-loving powertrain, the GLI gets a lowered (15mm) track-tuned suspension, stiffer spring and damper settings, and Volkswagen’s XDS cross differential system for better control. The ride isn’t noticeably stiffer than the standard Jetta, but handling is significantly better around corners. The GLI also gets a more aggressive look – in front there’s a new grille, foglamps, and spoiler, and the rear gets smoked taillights and dual exhaust tips. Red-painted calipers round out the “Look, I’m sporty” package. Our model includes 18-inch “GLI Alloy” wheels (standard on the Autobahn trim,) which made the calipers pop even more.

Inside, the 2012 GLI gets fancied-up aluminum pedals, shift knob, dash and door trims, along with red stitching on the sport seats and flat-bottomed leather steering wheel. All 2012 Jettas get a new audio system as an option (standard on some trims) – a nine-speaker (with subwoofer) 400 watt Fender system that sounds exceptional. A standard auxiliary jack and iPod connector (in the glove box) let you listen to your own music and control it through the touch-screen interface. My biggest gripe about the system is the power/volume knob that has a little “power” symbol on the face that turns with the knob instead of staying in place:

Quite possibly the most absurd complaint about a car, but it drives me crazy having it tilted in one direction; I have to set it to point up then use only the volume controls on the steering wheel. Please tell me I’m not the only one who this bothers. Anyone…?

The new GLI starts at $23,495, and is well-equipped with all that fancy stuff above, plus Bluetooth, 60/40 rear seats, cloth sport seats with manual adjust, one-touch up/down windows all-around, 17-inch wheels, and the standard (non-Fender) six-speaker audio system (you still get aux and iPod inputs.) Upgrade to the GLI Autobahn trim for $25,545 and you get the bigger and much nicer-looking GLI Alloy wheels (the 17-inchers on the regular GLI are kind of ugly,) power sunroof, fake leather with heated front seats, a cooled glove box, automatic climate control, and the fancy Fender sound system. For another $900 you get navigation and push-button start/stop.

Fuel economy is a respectable 22/33 mpg – only one city mpg lower than the 170 hp five-cylinder in the “normal” Jetta. 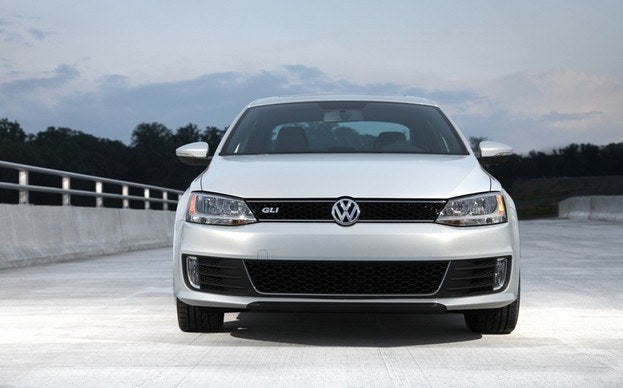 Looking for a run-down of the practical side of the new Jetta? Check out the 2011 Jetta SEL Review I ran last month. There aren’t many differences between 2012 and 2011. The interior is still lacking in the same quality pre-2011 models had, but the value-per-dollar is still above most others in its class. The GLI’s fun-per-dollar ratio is particularly high.