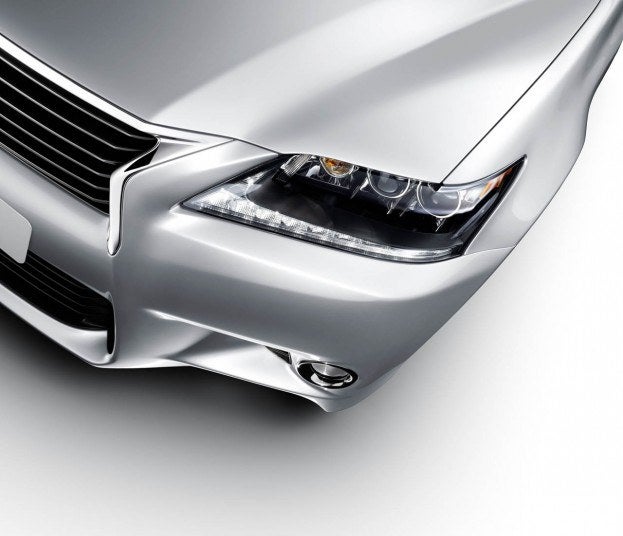 Lexus took the wraps off its GS 350 sedan at Pebble Beach Concours d’Elegance last month. It isn’t wasting time introducing the rest of the lineup though. Sometimes manufacturers spread out launches longer to create interest; Lexus is ditching that strategy.

After releasing some teasers of the F performance model of the GS, which is coming for the first time. Lexus has chose Frankfurt to introduce the new GS 450h. With the GS 450h, Lexus, as with the previous-generation car, ignores its usual naming convention that includes engine size in the moniker. Why not just call it GS 350h? Go figure. Like its standard counterpart, the GS 450h is powered by a 3.5-liter V-6. In this application though, it is running the Atkinson-cycle. Lexus says it is the first “world’s first premium performance sedan to be equipped with a V6 Atkinson cycle gas engine and two-motor hybrid system, in a front engine rear-wheel drive vehicle.” Combined with a high-output electric motor, the setup makes 338 horsepower and Lexus isn’t revealing how much torque. Electric engines are known for their torque, so we would imagine its an impressive figure. Interesting why they aren’t bragging on that. The GS 450h is capable of operating under purely electric power, and it has five modes: Normal, Eco, Sport S, Sport S+ and EV. 0-60 arrives in 5.6 seconds, versus 5.7 seconds for the standard car.

The GS 450h’s number is down versus the previous generation models 0-60 time of 5.4 seconds. However, efficiency is said to have been improved by more than 30 percent; official mileages estimates from the EPA will be arriving later.

With that, there is only one model left to reveal, the GS-F. The GS-5 also happens to be the most anticipated, and the only GS model powered by a V-8. Lexus has made a bold move paring the GS lineup down to only V-6 power in its standard cars. Most of the competition offers V-8 engines on their mid-size sedans, but that could change as the overall market is moving toward increased efficiency.