One of the most anticipated launches of the 2011 Frankfurt Motor Show is here: the Jaguar C-X16 Concept. While at first glance, it might seem like a successor to the XK, that isn’t the case. The C-X16 is a new, lower-cost model that will slot in below the XK. Jaguar’s styling has been gorgeous lately, and look for the C-X16 to continue that. We’re big fans of the existing XK, but from the teaser sketches that Jaguar released earlier to the full reveal in Frankfurt, look for the C-X16 to take everything to the next level.

Jaguar’s head designer Ian Callum has found a design theme that works for the automaker. The C-X16 follows a similar pattern to recent Jaguar products, eschewing retro design hints for a modern approach. More curves a la the C-X75 concept would have been nice, but what we see here is a clearly production-ready design. It has classic good looks with a long hood and muscular stance; even better looking than the XK, we’d say.

“A Jaguar sports car should have clear visual movement in its design, and the C-X16 is the perfect demonstration of that goal,” Callum said. “Each of its lines begins with a sense of purpose and ends with a sense of clarity. It’s that approach that has given the C-X16 its purposeful stance.”

The performance-red interior is easy to fall in love with too. The Jaguar C-X16 has a minimalist, driver-focused cockpit accented by Alcantara micro-suede seats, machined aluminum, dark chrome, and carbon fiber. Jaguar took inspiration from fighter jets when it came to designing the instrument panel, gearshift, and other switchgear inside the cabin.

Power comes from a supercharged 3.0-liter six-cylinder making 376 horsepower and 332 lb-ft. of torque. Power is directed to the rear wheels via an eight-speed automatic. To help increase fuel economy, Jaguar has fitted the C-X16 with the auto start/stop system from the XF. The system uses a Twin Solenoid Starter that Jaguar says shuts the engine down within 300 milliseconds after the vehicle has stopped.

There’s more, though, as the Jaguar C-X16 features a hybrid system that delivers efficiency while being thoroughly enthusiast-focused. The feature is activated by a “Push to Pass” button on the steering wheel that boosts power output by an impressive 92 horsepower and 173 lb-ft. of torque for up to 10 seconds. According to Jaguar, the C-X16 can go from 50 mph to 75 mph in just 2.1 seconds! We can also expect a top speed of 186 mph with a zero to 62 mph time of 4.4 seconds.

Jaguar also designed the C-X16 to be as light as possible, using aluminum for the bodywork and engine architecture. Ride and handling are also aided by the setup, which yields a perfect 50:50 weight distribution.

We will be excited to see more of the Jaguar C-X16 in the coming months. Until then, check out the photo gallery below. “Look at the C-X16 and you want to drive it,” Callum said. “And that’s just how a Jaguar sports car should make you feel.” 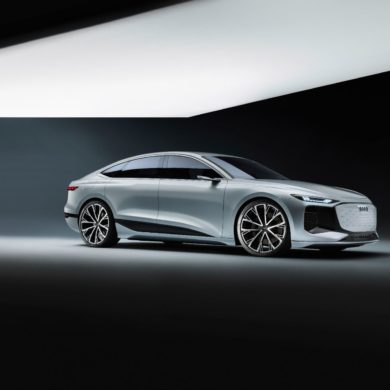