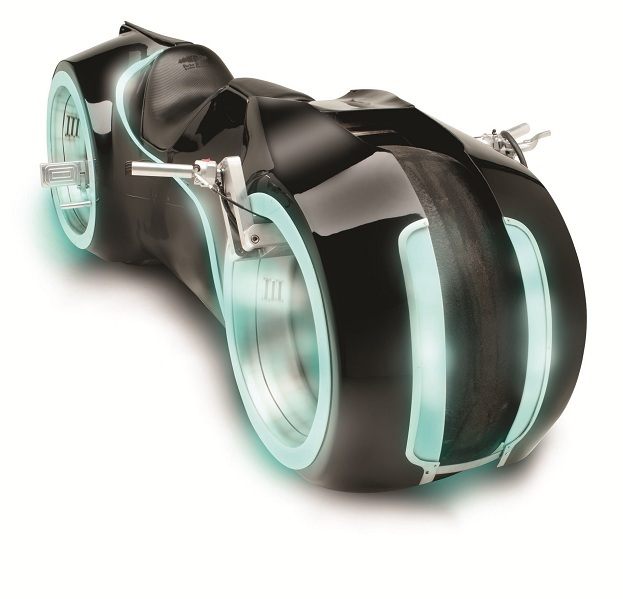 A showcase for early computer animation in the 1980s, the movie Tron was unlike anything previously seen on the big screen. Taking audiences into a vast computer program called the Grid, the 1982 release of the motion picture not an immediate hit. However, the acceptance and admiration of Tron evolved as our virtual technology rapidly grew. Following the journey for which the first movie endured, film company Disney decided to rejoin the innovative franchise accepting the all-new world outside as well as inside the Grid. In the 2010 release Tron: Legacy, the revamped Grid’s most captivating creations was a new-generation Light Cycle. For those finding life outside of the Grid rather dull and confiding, United States retailer Hammacher Schlemmer offers a product recreating to sensation of the modern Tron film update for the real world roads.

A street-legal motorcycle, the $55,000 vehicle is brought to life featuring all the bright and unique Light Cycle attributes. Parker Brothers Custom Choppers of Florida began crafting the Tron Light Cycle last year ahead of the winter blockbuster. Having previously recreated the Batpod from the 2008 Batman movie instalment “The Dark Knight”, the chore of adapting to Light Cycle into reality was an equally successful feat.

Closely replicating the movie vehicle on a steel frame wearing fiberglass panels, The Light Cycle’s memorable shape is accompanied by the two hubless wheels. Riding on tires originally sourced for trucks, the Light Cycle design rolls thanks to customized wheel rims. Just like the Light Cycles that raced around in the Tron: Legacy action scenes, the motorcycle illuminates the roadway. While light ribbons are out of the question, the real-life Light Cycle wears several electroluminescent strips running along the wheel rims, tire cowls and along the side panels.

Losing little of the Tron: Legacy movie vehicle’s charm, the Light Cycle presents near identical riding positioning as that of the film’s characters. A padded leather saddle seat forces the rider’s body forward with handlebars positioned through the front wheel. As the handles serve as the acceleration and braking of the Light Cycle, foot pedals allows the rider to select one of six forward gears in the constant mesh manual transmission.

While Tron fans would relate to the fictional Light Cycle being powered by pure liquid energy, limitations of such a fuel source outside of the Tron world have left gasoline as the only suitable alternative. A 996cc Suzuki four-cycle is the powerplant choice fuel-injected from two fuel tanks (a 3.5 gallon main tank and a 1.25 gallon reserve reservoir). A fully-operational motorcycle, the Hammacher Schlemmer catalogue write-up suggests the Tron-inspired Light Cycle is best enjoyed for easy trips.

Available from the Hammacher Schlemmer rich catalogue, the $55,000 Light Cycle continues a legacy extending beyond the Tron movie. A company founded in 1848, Hammacher Schlemmer exists as a business catering to the customer who has everything as well as the ones demanding niche items. Apart from the Tron Light Cycle, other eye-catching items currently available to order from this retailer of the innovative as well as the unusual includes a two-story inflatable reindeer, the $108,000 Tango electric car and a B-9 robot created from the original prop blueprints of the Lost in Space television show.

Unfortunately, the $55,000 real-life Light Cycle lacks a special characteristic that would be an immense help for city parking. Whereas the Light Cycles in the movie can be formulated from a user’s baton, this Tron tribute maintains a permanent state as a 474-pound machine.