With Buick no longer producing what I like to call “THE senior special”, with soft, cushy, and inoffensive offerings like the Park Avenue and Lucerne, there was an open spot for another car-maker to take the reigns and produce a vehicle for those who don’t care about flash or driver interest.

That car-maker is Toyota, and that car is the Avalon.

Now, the Avalon is not a new model for Toyota. In fact, this four-door sedan has been around since 1998. The first generation was not much more than a slightly larger, slightly plusher Camry. Now in its fourth generation, the Avalon has grown into a full-size, quiet cruiser.

For 2011, the long 197.6-inch vehicle (now classed as a full-size vehicle) has a revised body that flaunts a sharper front end with new projector headlamps, stronger creases in the front fenders, and new LED taillights. Even with the new lines, there is still a sense this car is more about comfort and solidity than standing out in the crowd. Take for example the small 17-inch wheels; they look out of place on this class of car, which usually comes with a larger size wheel. All in the conquest for that smooth, supple ride. Inside the Avalon, that theme continues. The front seats are as large as your favorite La-Z-Boy and are quite comfortable despite the lack of sufficient side bolstering. But that’s fine, as occupants simply settle into the seat for the long haul. And if need be, the front seats in my Limited test model can either be cooled or heated to anyone’s liking.

With a total interior volume of 107 cubic feet and with a width of over six feet, there is plenty of room in the Avalon for five full size adults. The rear is just as comfortable and spacious as the front buckets, and can actually recline backward almost two inches to help riders relax and get comfortable. When Ford stopped making the Crown Victoria, the New York Taxi Commission would be happy with a fleet of these.

A pair of hooded gauges that are back-lighted by a cool, soft blue reside behind a rather large steering wheel. On that wheel are over 13 buttons and switches to control everything from the radio and Bluetooth phone to the voice-activated optional navigation system and even controls for dual-zone automatic climate control are present. To the right lays the six-inch touchscreen that houses the rudimentary controls for everything listed above, which multiple buttons littered on three sides. And that is my only quibble about the interior. While the space and comfort is terrific, the layout up front is not. With that large steering wheel, important controls are blocked, such as the mirror controls as are both the turn signal and windshield wiper stalks.

Then there is the button-unfriendly center stack, which left me constantly hunting when I wanted to switch from navigation to the phone, for example. In addition, the interface has a feeling of outdated. Inputting information or making changes are intuitive, but the system is slow to react when changing albums on your iPod or typing in an address. And damn you Toyota for lawyering up the navigation system while the car is in motion.

The drive does make up for the negative bits.

All Avalons are propelled by one engine, a 3.5-liter, DOHC V6 shared with a laundry list of other Toyotas. The engine produces 268-horsepower and 248 lb. ft of torque at 4700 rpm. Transferring that power to the two front wheels is a six-speed automatic transmission. The 3.5-liter is a smooth engine that provides ample power. That mid-range torque helps give this big Toyota a surprising burst of acceleration. Too bad the transmission is a bit reluctant to downshift, a known feature in most Toyotas. But again, this car is not about wickedly quick shifts, as they are liquid smooth going in either direction.

The long wheelbase and those 17-inch wheels offer a decadently smooth ride on straighter roads. The Avalon is super quite, with little road and wind noise intruding inside. Any major bumps are felt a little blip on the radar between the suspension absorbing everything and those cushy seats taking care of the rest.

If there is a need to take back roads, the Toyota holds its own incredibly well. As probably the biggest surprise with the Avalon, corners and uneven roads do not affect this car at all. Sure, the steering doesn’t really talk very much as to what the front end is doing, but there is very little roll and nearly no float with the all-independent MacPherson suspension. Tight corners do scrub off speed; however the car can handle higher speed corners with aplomb that I have never felt in a Toyota sedan. 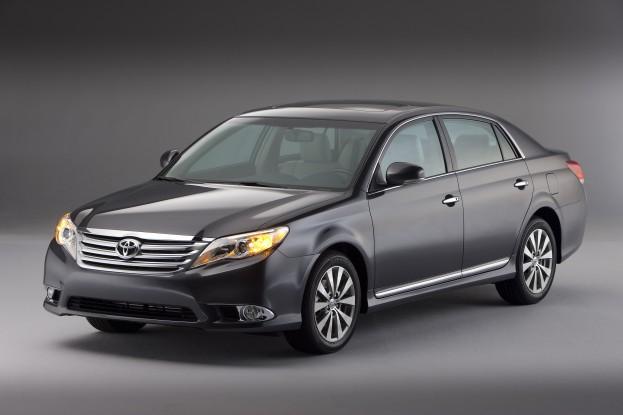 This vehicle was a surprise. I expected it to be about as fun as driving my grandparents’ house. But with its clean, inoffensive look and solid driving habits, it may appeal to a larger market. The interior does have some foibles, but the luxury features that come with the Limited model (leather, Xenon headlights, keyless access and start, 660 watt JBL stereo, navigation and rearview camera) will only cost $37,884.

From the company that produces such awful four-wheeled appliances like the Corolla and Camry, and sells a vehicle that actually works well while being somewhat enjoyable to drive is quite astonishing. I hope the rest of the cars from Toyota will follow on a similar path.