There I was, typing away on the computer in my office. Juggling Gmail, Facebook, and real work, unable to really concentrate; a typical afternoon – except this one was a little bit different. Anxiously waiting, knowing what was headed my way in only a few short minutes. I’ve been waiting over a year for this.

Then it happened – I hear a knock coming from the other room and jump up from my chair. The brisk walk to my front door and my excitement remind me of my younger self waking up on Christmas morning and running down to see what’s under the tree. A peek out the window reveals the prize: a brand-spanking-new 2011 Subaru Impreza WRX STI. I could imagine it wrapped with a big red bow tie.

“Be cool, Chris.” I calmly open the door to the driver from Subaru handing me the keys. I look at them for a moment, as if it’s the first time I’ve seen a set of car keys, before looking back up and sloppily signing the sheet of paper that says a bunch of stuff about not driving drunk, no smoking in the car…the usual. I rush over and take a lustful glance over the new Subie. 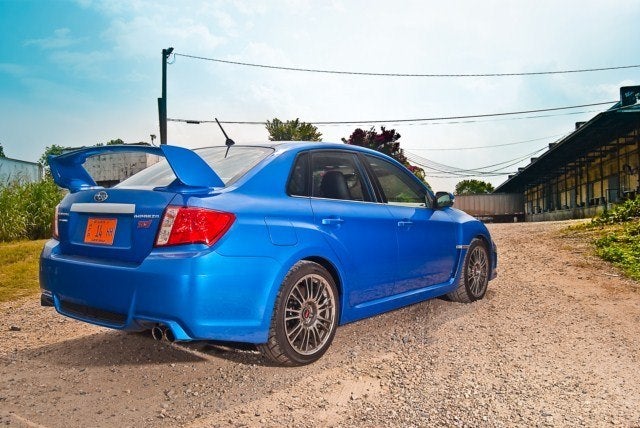 Luckily, Subaru brought back the 4-door sedan for 2011, along with its gaudy but charming wing. Normally I’m not a fan of either – but in this case, it works, for some reason. It’s blue, as every WRX should be, sporting attractive gunmetal 18-inch BBS alloys. Not the traditional blue/gold combo we love seeing, but they’re good wheels. An aggressive wide-body kit sets it apart from the comparatively bland Impreza, and the redesigned front and rear bumpers separate it from last year’s model. Seeing the hood scoop – knowing it feeds air directly into the high-cross-flow intercooler – is too much to bear. I must drive it. Now.

Hopping inside is familiar and comfortable. Not much different from the 2010 WRX STI, although this one is the top-of-the-line Limited trim level, dressed up in black leather with red stitching (to include embroidered “STI” logos in the two front headrests,) a special STI steering wheel, and specially-designed electroluminescent gauges to give me all the vitals. Looking around, there isn’t much to see. That’s part of the beauty in this car. So few frills and doo-dads cluttering up your space, you get to focus on what’s really important – like the SI-Drive knob, allowing me to switch between Sport, Sport Sharp, and Automatic modes, and the Driver Controlled Center Differential (DCCD) that lets you manually adjust – you got it – the differential. Man this car is cool!

Throwing in the clutch and turning the key sparks up the 2.5-liter, turbocharged Boxer engine, which lights up with a firm growl, then calms to a low rumble. This things sounds good for a four-banger. Sounds good period. I casually switch it into Sport Sharp mode, tightening up the car’s throttle response and fuel and ignition curves – and it’s noticeable. Why would anyone want any other mode than Sport Sharp? Sadly, it turns out the car defaults to the boring old Sport mode every time. Would it be so hard to hold a default? I keep the fancy DCCD in Auto – I’ll leave the differential adjustments to the pros for now. Off we go…

Sadly, I don’t happen to have a rally course around my apartments, but I do have a stretch of fun windy roads that twist around a big lake. The car instantly brings out my inner twelve-year-old. It’s like riding a roller coaster that I control. The stupid smile doesn’t leave my face as I drive way too fast for my own safety. But this thing does not…let…go. Subaru’s Symmetrical AWD system grips the road with what seems to be physics-defying traction, and allow you to throw yourself into corners that don’t seem possible. Do a near-redline clutch-drop from a stop and the tires grasp on to those 305 horsepower like they’re nothing. Then they rocket you to 60 mph in a mind-blowing 4.5 seconds. That’s faster than an Aston Martin V8 Vantage. And this, my friends, is why I could never own this car; I would end up killing myself. But at least that smile would never leave my face. It doesn’t hurt that all WRXs for 2011 are given wider tires for even more grip in the twisties, and the STIs get better suspension bushings, larger front and rear stabilizer bars, and stiffer coil springs. As if STIs needed better handling…not that I’m complaining. No wonder STI owners are in love with their cars.

Driving this car is an excellent experience itself. The sound of the exhaust is cool, shifting gears is tight and definite, and the clutch is perfect. Steering is…needless to say…near-telepathic in response and gives the perfect amount of feedback from the road. Acceleration is a blast, and although you do feel some lag from the turbos, it isn’t bad. 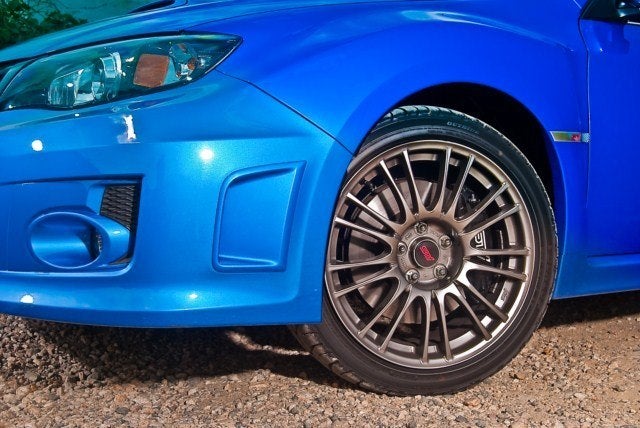 Now, let’s pretend for a moment that you won’t be driving your STI like a raped ape every second you’re in the driver’s seat. As an everyday driver, you’d expect any car that performs this well to be a pain in the ass (literally) on your morning commute. Au contraire. The leather-wrapped seats in the Limited trim (leather/Alcantara on base trim,) hold you firmly in place without feeling like you’re sitting on granite. Normal driving, if left in Sport or Automatic mode, is surprisingly comfortable. Yes, the suspension is still tight, and the exhaust is still loud, but it’s completely livable. And incredibly, you will often forget you’re actually driving a four-door, four-seater sedan with impressive space in the back for passengers. It feels like a much smaller car.

And that is precisely what amazes me about this car. It’s easy to buy a great two-seater coupe with no storage space or a four-seat coupe with no rear legroom. It’s easy to buy a four-door sedan that you’d rather watch grass grow than drive. The point is that most cars have to compromise something to be whatever they are. The STI isn’t like that. It’s every bit as good at driving fast and corning hard as it is fitting a few friends or family members in the back while carrying home a trip full of groceries. It simply does not compromise anything. This, of course, is assuming that you’re OK with life without some of the electronic gizmos and extra buttons you find pasted all over modern cars. Me…I prefer it that way. It makes me focus on what’s most important: the driving. Trust me, downshift into second into a corner at 45 mph and lay on the throttle. You won’t be thinking about the lack of a laser-guided cruise control. 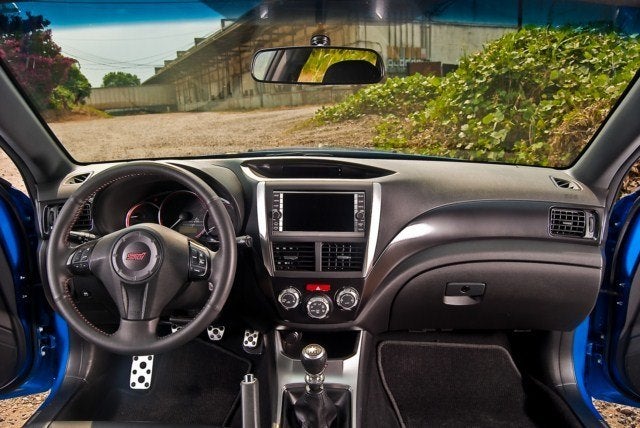 All of this praise doesn’t mean the WRX STI is all rainbows and unicorns; it does have a few flaws. The nav system, for example, is completely worthless. Save your $1800 and buy a decent one. The standard audio unit kind of sucks too, but at least you didn’t have to plunk down an extra $2K on it. Fuel economy on the STI is 17 city, 23 hwy mpg, which isn’t great until you consider damn the thing goes from zero to sixty in 4.5 freaking seconds. Drop down into the regular, 265hp WRX (with a 5-speed manual instead of a 6-speed,) and you’ll notice around 19/25 mpg – 2 mpg better on average (hardly worth the drop in power.)

The 2011 Subaru WRX starts at around $25,500. That’s for 265 hp, a 5-speed manual, and the basics. Adding on options and packages brings it up to just under $30,000. Jump up into the STI (please do) for $34,000 and you’ll get 40 more hp, a sixth gear, better suspension and handling, the SI-Drive system, better brakes, bigger wheels, HIDs, sport exhaust, footwell lighting, adjustable differential, STI-design stuff all over, and that many more envious looks from other drivers. Do I really need to tell you that the extra cost is well worth it? For a few grand more ($37,345) you get leather-trimmed upholstery, 18-inch BBS alloy wheels, a power moonroof, and fog lights.

Needless to say, I’m a raving fan of this car, and have been since I first drove one. It delivered every bit of excitement I was anticipating, while still giving me enough space to carry three friends around with room to spare. Were I to have $35k for a new car, the WRX STI would be at the top of my list, and it should be on yours too.

Keep reading for a full photo gallery below.