A creation that has ruled roads for over 46 years, the Ford Mustang has a remarkable connection to the skies. Prior to the Ford Motor Company’s adoption of the Mustang name, an American World War Two P-51 fighter plane soared in the hands of air warriors. Another interesting tidbit relating the Ford Mustang with aviation was spawned with the sale of the first pony car in mid-1964. The first Ford Mustang ever produced (a white convertible eventually reacquired and made a permanent resident of the Henry Ford Museum) was sold to a Canadian airline pilot Stanley Tucker.

At the Oshkosh, Wisconsin air show in 2008 held by the Experimental Aircraft Association (EAA), Ford Motor Company connected again with the intrepid pilots of the sky. Producing unique examples of their popular performance car in support of youth-oriented aviation foundation Young Eagles, the Mustang AV8R (exploring design cues of the F-22 Raptor fighter aircraft) was the first vehicle committed to a special auction at the airplane gathering. After the Ford Mustang AV8R raised $500,000 for the cause, the sale of a special pony car has become a sample for the EAA AirVenture Oshkosh. For the upcoming show, the flight education group Young Eagles is anticipating potential buyers to aim high with their bidding paddles for a special one-off 2012 Ford Mustang GT coupe styled on the Blue Angels identity. 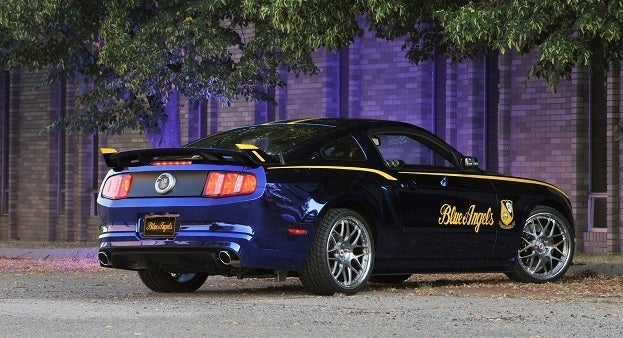 Dedicating the 2012 vehicle to the United States military air demonstration team, the Blue Angels crest is worn along surfaces of the outside and inside. On the exterior, one Blue Angel emblem is located on each side panels ahead of the coupe’s doors. A specially designed gas cap also contains the identifiable symbol on this 2012 Ford Mustang. Blue Angels badges on the inside are imprinted on the Recaro racing seats.

Incorporating the screaming yellow striping inside of the black interior, the Recaro racing seats is far from the only touch Ford gave the Blue Angels Mustang GT. Illuminated door sills cast a blue light through the entrance and exit. Deleting the rear seat, the now two-seat cabin has a yellow painted cross brace supplying improved overall handling stiffness. Unique instrument and navigation screen graphics are also present to the driver as well as the co-pilot inside this 2012 Ford Mustang GT.

A car prepared to be auctioned off July 28th, the 2012 Ford Mustang GT Blue Angels one-off model is set to be a flying fast street machine ready to launch the flight experience for a host of young aviation enthusiasts.