“The Ultimate Driving Experience” has taken more forms than ever with a luxury car line-up composed of coupes, sedans, convertibles and crossover vehicles.

Introduced by BMW in 2004, the 1 Series became the newest entry-level car for the Bavarian motor company. In the North American market, we are used to seeing the BMW 1 Series in a coupe and most recent a convertible body style. Kept as a niche subcompact luxury car, car buyers in the United States and Canada remain largely oblivious that the 1 Series was first offered as 5-door hatchback. In Europe, highly practical 5-door and 3-door body style causes a definite split from the nimble, under-6 second sport compact BMW advertises for North America customers. In whatever body configuration, BMW refused to cut corners on applying the same level of quality engineering and workmanship to the 1 Series as with their highest-priced 5 or 7 Series. The BMW 1 Series endured almost 8 years as a classy compact car largely unchanged in styling. For the 2012 model year, the BMW 1 Series receives its first major design revision.

Revealed on a 5-door version BMW 1 Series, the redesigned elements of the German compact car resides within a longer, wider footprint compared to its predecessor. The wheelbase of BMW’s new F20 platform is elongated by just under 1.2 inches for a length of about 105.9 inches in total. Said to be part of a more youthful look, the front end treatment with the new BMW 1 Series draws hints from the new 6 Series and the 5 Series Gran Turismo. Styled with BMW’s design trademarks including a long hood and kidney-shaped grille, the 1 Series’ front headlamp housings are given an aggressive, near quadratic shape. Optional bi-xenon lighting is available from the BMW 1 Series’ clear lens. Turn signal indicators of the 2012 model year 1 Series is embedded in the external mirrors said to be a first for BMW. Also relating to signal lighting, the new BMW 1 Series integrates dynamic brake lighting. When the brake pedal of the BMW 1 Series is pressed hard in a panic-like stop, the rear brake lights will flash to warn following motorists. For the European hatchback version, the BMW 1 Series is being presented as a Sport Line and Urban Line each offering their own personalization touches.

Inside, the BMW 1 Series conveys dynamic, forward-leaning lines to project a sport look. With control configured within easy access to the driver, all occupants are provided safety inside of the BMW 1 Series thanks to 6 airbags. Optional interior features on the new 1 Series include a BMW iDrive-supported Control Display either 6.5 or 8.8 inches in screen size capable of controlling all the multimedia and comfort options. A new interface is also available on the 1 Series allows Twitter and Facebook messages from smartphone portable devices to be shared on a vehicle interior display. 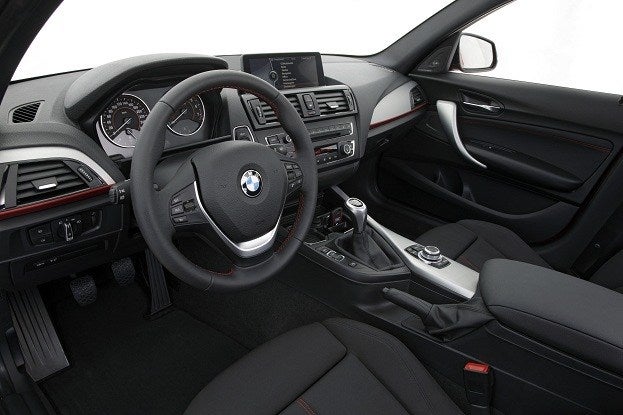 Though a small, fuel-efficient vehicle in its first generation presentation, the new BMW 1 Series is confronted with political and social pressures of all modern automobiles where making the most from a gallon of fuel is key. As demonstrated on the recent introduction of the next generation M5 sedan, reducing the amount of cylinders found under a vehicle’s hood is BMW’s latest engineering strategy. Dedicating focus to an inline 1.6 liter four-cylinder engine design, BMW has incorporated their TwinPower turbocharger system in the pursuit of a high horsepower per liter production. Inducing the memories of the BMW 2002 Turbo, the new BMW 1 Series gasoline 1.6 liter engine involves all the advanced goodies for ultra precise efficiency such as Double-VANOS and VALVETRONIC. Offered in two power ranges, the 1.6 liter powerplant ranges from 136 to 170 horsepower. Equating to as much as 106.25 horsepower per liter, this is just under 30 horsepower per liter more than the 3-liter inline-6 engine found as entry-level output on the United States marketed BMW 1 Series.

Deeper down the powertrain of the new 1 Series presents a manual and automatic option. The 6-speed manual shifter returns as a standard transmission on the BMW 1 Series for the 2012 model year. An optional 8-speed automatic transmission has been added to the 1 Series becoming one of the first compact cars to offer that many gears.

This new BMW 1 Series is expected to be the first of a grander small car plan by the German automaker on two fronts. Firstly, it is believed the BMW F20 platform will play a part in the future MINI product development. Secondly, following this year’s announcement of the BMW i sub brand, the BMW 1 Series is slated to help inspire at least one of the new cars in 2013. As for the 2012 model year BMW 1 Series’ release, it is expected by the end of the year with details for the North American version coming up soon.