The Day I Fell in Love… 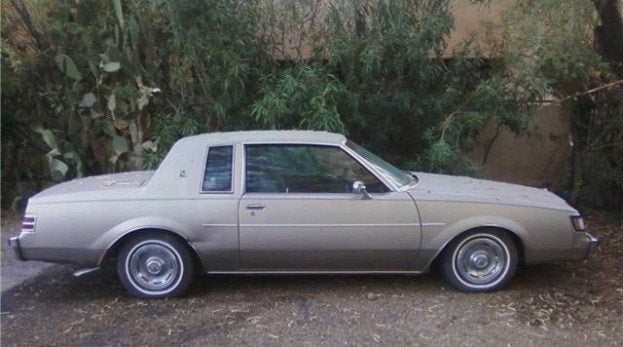 Do you remember the first time you fell in love? I do. She was a steel beauty straight out of Detroit. I wasn’t too keen on the color, a grandma green shade that my friends make fun of me for, but I wasn’t ashamed; ok- at first I was. My first love was a 1984 Buick Regal, 2-door, with a few hidden modifications. It was a hand me down that my parents had driven for a few years after they bought it from a friend of a friend. I’m not from a big car family, no mechanics or collectors, so she was a bit misunderstood.

When I started learning to drive I didn’t want to be seen going through my neighborhood in her, but once I was rid of a chaperon, I knew there had to be something more. I got my driver’s license on a cold December day in North Carolina. The streets, still patched with ice, were semi deserted, so on a back country road I opened her up for the first time, and she liked it. Tires skidded behind me, from the ice I’m sure, and I must admit I was scared! I had never driven fast or been in a car driven fast, and I felt a rush shoot through my body and slam my right foot down. I looked in the rear view and saw a black puff come from the exhaust as she cleared her throat. Her favorite roads had nice curves highlighted by long straight-aways.

The speedometer, like everything else in the interior was suited for a grandmother, oversized numbers that only went to 88 MPH. The pale green velour front bench that split so that people could get into the back kept me from sliding into the passenger seat in the curves. The radio was analog with a dial and 5 “preset” buttons that all tuned to the same station. She was an automatic; I couldn’t drive a manual yet. I had to be careful because she was automatic; if I hit the gas too hard with the brake down she stalled. I found that out trying to learn to do a burnout. The only frill was an ashtray that dutifully hid the butts of my covert rebellion. I didn’t doll her up with the exception a set of original steel hubcaps to cover the black steel wheels. I kept her as incognito as possible, just like I was.

As I sat at the red-light on a popular drag in my hometown on a sleepy Saturday night a comparable age Camaro pulled alongside me. A guy from my school sat behind the wheel and gave me the international “wanna race” face as he revved his engine. I gripped the leather wheel and just sat there. If I did the same she would leave me stranded, but I knew I she was up to his challenge; our first test. A lot of people would “drive hard” on this stretch, we didn’t call it street racing, that was illegal. The light snapped to green and the kid in the primer sport scar barked his tires as he jumped the line to best me. But I knew what my grandma sleeper could do. I just held my foot all the way to the floor as I felt the transmission wind and shift into the next gear as I sped up.

This stretch was popular because the lights would change green in succession and opened up a half mile of the 6 lane-street. There were six lights total from the start to the “finish line” next to the local parts house. The gear heads would stay parked there all night just to call winners and losers and dish out the proper insults when needed. I worked at McDonalds and hadn’t made it into their world yet.

We crossed under the second light. I was looking at him through his passenger window. He wasn’t happy at all. Four lights left. We stayed pretty close for a while, but my girl was a long liner; the more space she was given to run the faster she would get. When I went under the sixth light he was nearly two car lengths behind me. I screamed because no one could hear me.

My heart was racing so hard that I could hear the bass thumps in my ears. I never even saw the blue lights kick on after I crossed the line. The Camaro escaped down a side street headed for the safety of the unlit country side roads as I pulled over into an empty parking lot. An unfamiliar wave of anxiety hit; this time fueled by fear, embarrassment, and uncertainty. The treble heavy speakers blared out “Highway To Hell” as the officer approached my window. I sat paralyzed watching his silhouette grow in my mirror; all the while he was adjusting his hat. When he knocked on my window I was released from my spell and rolled down the glass that separated us, still looking straight ahead.

“Do you know how fast you were going, Mandie?” He knew my name. I looked up and saw a family friend under the hat. I started breathing again as I answered, “No, my speedo stops at 88…” He let out the hardiest laugh as he opened my door to let me out. He had clocked me at 102 miles per hour in my “grandma cruiser,” that’s what my friends called her. He popped the hood to take a look. I didn’t even know how to do that yet. We walked to the front as he made small talk trying to calm my nerves. He showed me how to release the massive steel hood and it flew up. A small light flickered to life as he inspected the chrome beast that hid under there. My eyes grew large as they reflected the shiny façade that manufactured all that power. He poked and shined his light and mumbled to himself.

“Mandie, did you get this car from David?” He asked me as he rested his hands on the lip of the hood above his head. “I think that’s where Dad got it…” I answered with all of the certainty of a 16 year old girl still coming down from the high of the race and the fear of the pull over. He knew the car. It had a 400 small block in the place of the factory 6 cylinder. The chrome 14” high hat hid her 4 barrel carburetor and HEI ignition. The polished valve covers covered oversized flat top pistons and a port and polished head. I had no idea at the time what he was saying and he knew it, so he simply said “That means you’ll go fast.” I already knew that!

He closed the hood and put the beast back under cover. He said he was going to tell my dad and I needed to slow down, but he wasn’t going to give me a ticket or impound my car. Then he came back to where I was still standing next to her in a shock of sorts and said, “Off the record, mighty fine job. I saw the whole thing.” My face flushed, I let out an uneasy laugh and patted to ole girl on her top. The crowd at the parts store saw him leave and me drive away scot-free. They found me every weekend trying to see if I was beatable, no one knowing what I was bringing to the game. They nicknamed my pea green machine “The Bitch.” I totaled her a few months later in a rematch against the Camaro, but her legend still races along that stretch of street and the stories usually start “remember that ole green Bitch that used to run out here?” That was my first love, still pretty unbeatable.