Much has been made of McLaren’s reentry into the world of automotive road cars. The rollout has been carefully and strategically planned over the last few years, with a glimpse of the car first coming in September 2009.

One thing is clear is that the company has had no expense spared in producing its vision of the very best mid-engined exotic at its price point. The MP4-12C is the McLaren’s first and only road going production car since the original world-record-beating F1.

With no dealer network to speak of, McLaren had to create one from scratch. The process took quite sometime and the company received 600 requests to start a dealer. Only 35 of the very best dealers made the cut, and the first has just opened in London. Other stores in England will follow, along with dealers in countries in Europe. 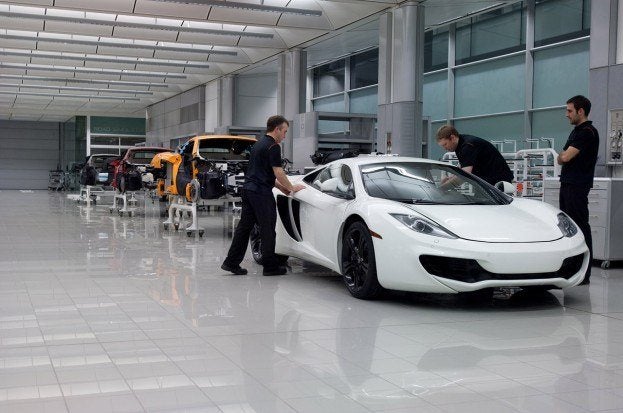 Here in North America we will have ten. Nine in these United states cities: Chicago, Dallas, Los Angeles, New York, Miami, Newport Beach, Philadelphia, San Francisco, Tampa. The one in Canada will be located in Toronto. These 35 dealers are all scheduled to open by the end of the year.

For some, a question has remained about what niche McLaren would carve in the market. McLaren executives have always claimed the market is big enough to support everyone, and that is proving itself to be true.

The MP4-12C has reportedly sold out a production run of a few thousand units, leaving the car sold-out for a few years, as McLaren plans to produce 1,000 of the cars a year. McLaren plans to produce 4,000 vehicles a year by the middle of the decade, once it introduces its full-lineup. Given the apparent success of the MP4-12C so far, we’d say they are well on their way to achieving that goal. Next on the company’s agenda is said to be a new version of the F1 supercar to top the lineup.