“The greatest crumpet collector of all time.” That’s how the great Henry N. Manney III described the Jaguar E-Type. And who can really disagree with him?

But, for Jaguar, the question became, ‘How can we make the E-Type better?’

The answer was the same tried and true response since cars first came to be: Make it lighter. Make it slipperier. Add horsepower. Although it started out as a road car, the Jaguar E-Type was a common sight at racing tracks soon after its debut at the 1961 Geneva Motorshow. Not very surprising, really, since the engine and chassis design derived from the triple Le Mans winning D-Type.

Since the E-Type was a road car, and economics played more of a part than for a racecar, the costs of production were kept low by fitting the E-Type with an all steel body. Fine for a production car, but this, naturally, proved to be a big handicap when it came to racing against such heavy hitters like the Ferrari 250 GTO, Aston Martin DB4 GT Zagato and Shelby Cobra. All of these competitors used featherweight aluminum bodies.

By switching over to an aluminum body and engine block knocked 440 pounds from the all-up weight of a steel bodied E-Type. 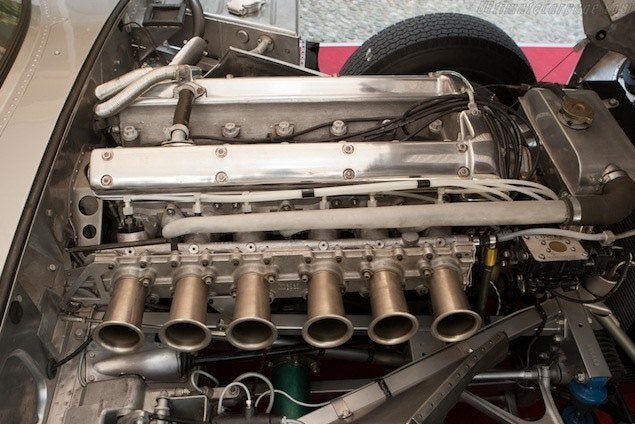 One of the most successful and notable of these early racing E-Types was Roy Salvadori and Graham Hill driven, John Coombs prepared example campaigned in 1961 and 1962. The notable accomplishments of Salvadori and Hill in the steel E-Type ignited interest inside Jaguar’s moribund competition department by the end of 1962. The factory determined to build a proper competition version, and John Coombs was invited to the factory to have his successful Salvadori/Hill machine serve as the prototype.

To comply with homologation rules the body could be modified but not the chassis, so they kept the steel monocoque. A new body was fabricated completely from aluminum and looked virtually identical to the production road car. To enhance the aerodynamics, a separate hardtop roof was added with a small vent at the rear. Later cars were bodied with full fastback coupe bodies that were even more aero- effective. 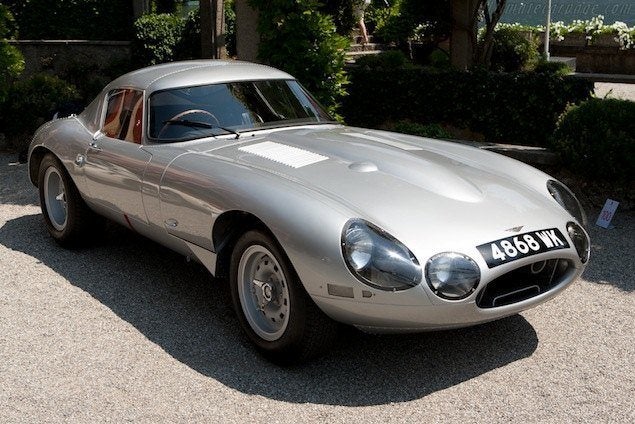 Beneath the lightweight shell, the all-new competition E-Type included such upgrades as an aluminum cylinder block instead of the cast-iron block from the road cars. The up-rated 3.8-liter engine was fitted with Lucas fuel injection, which bumped the output to well over 300 horsepower. All of this newfound power was delivered to the rear wheels via a five-speed, close-ratio box.

The Factory merely called their new racer the “Lightweight E-Type.” Jaguar’s new racecar was handed over to privateer entrants, a few received factory support. The chosen few included John Coombs (of course) as well as American Briggs Cunningham, who prepared three cars for a full-blown onslaught on Le Mans.

One of the first go-rounds for the Lightweight E-Type was the 1963 Sebring 12 Hours. Two cars placed seventh and eighth overall. That was good enough for finished first and second in their class, but the Jags were trumped by three Ferrari 250 GTOs that raced in the under 3-liter class. Cunningham’s run at Le Mans that year was fairly abysmal. The high-speed Circuit de la Sarthe traditionally was a good track for Jaguars, so hopes for a good result were high. The special Jags were competitive in practice but the race was a disaster. Two of the three E-Types were out before the 40th lap and the surviving example finished ninth overall, second in class behind a Shelby Cobra. On top of that, all the smaller-engine Ferrari 250 GTOs were significantly quicker.