Ryan Dunn, one of Johnny Knoxville’s Jackass crew, and his passenger died in a crash outside of Philadelphia early this morning.

I could be cynical and say, “What a surprise!” but I won’t.

As one of the sidekick members of Jackass brigade, Dunn was partially responsible for bringing the world one step closer actually being like the movie “Idiocracy”. C’mon, who do you think Mike Judge based the most popular television show, “Ow! My Balls!” in the movie on? Knoxville et al. Or at least that’s my guess. So it seems rather unsurprising that a member of the Jackass retinue would buy the farm by stuffing his Porsche GT3 into a bunch of trees while traveling at triple digit speeds.

Yes, the photo you see above was taken at the scene of the one-car accident that happened in West Goshen, Pa. around 3:30 AM Monday morning, is all that remained of the GT3 when police and fire crews pulled it out of a grove of trees earlier today. Before that, Dunn’s ride looked like this:

At first, the police said they didn’t know whether the 34-year-old Dunn, or the then unidentified person was driving the car. Nor did the authorities know whether alcohol was to blame. But, ironically or maybe just coincidentally, Dunn did tweet the following picture from his Tumblr account hours before his death:

Sure, it could have been a Coke or an iced tea.

The NBC affiliate in Philadelphia reported that “The Porsche shot through about 40 yards of trees before it hit the last one and exploded into flames, according to police.” Which pretty much means that if the impacts (either the final one or the many previous jolts after passing through 120 feet of trees) didn’t kill Dunn and passenger, then the explosion and resulting fire sure as hell did.

MTV, parent network of the Jackass TV series (and producer of the movie spin offs) said, “We’re deeply saddened by the passing of a member of the MTV family, Ryan Dunn. Our hearts and thoughts are with his friends and family.” MTV did this via Twitter, of course. Which is both highly meta and highly ironic, because nothing says, ” deeply saddened” like a 140 character limit. 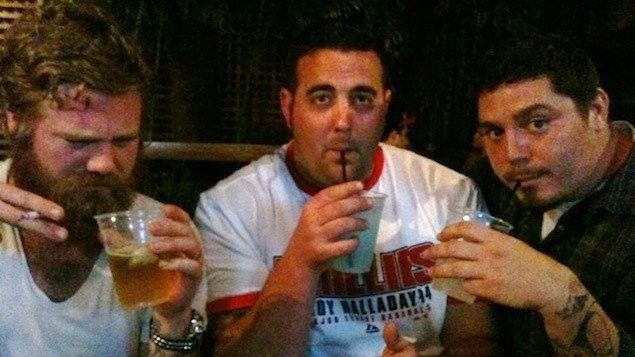 Now, one could get all moralistic about “what this says about our culture” and “speed kills” and “the wages of sin” and all that, but I will leave that up to the seemingly endless supply of people whose job it is to be morally outraged at something, anything.

What can be said though, is that Dunn seriously overcooked it in a place where the price for doing so was going to be plenty high. Like Clint Eastwood said as Dirty Harry applies (as well as to all things automotive): “A man has got to know his limitations.”

Sure, sure, you could say that this sort of behavior – going stonking fast – should be reserved for the track, and the track only. Which is all well and good and true, but tell me, who of you out there with a Porsche or a Vette or some other such ride, always, always, always follow every rule of the road at all times? Hands? Anyone? Anyone? Bueller? Right.

The point of doing things like this is knowing when and where you can get away with it. What will happen if, say, I lose it right at this spot in the road doing, let’s say for the sake of argument, 10 MPH over the limit? Well try not to show that you’re the next best thing to Rick Mears if there’s a grove of trees on the outside of a corner. Or if it’s wet … or icy … or, well you get the idea.