The BMW 1-Series is scheduled to make its first appearance at the Frankfurt Auto Show. The show isn’t happening until this fall, but that isn’t stopping BMW from introducing its new 1-Series. Leaked images of the car appeared on the internet a few days ago, prompting its official release from BMW.

The 1-Series was first introduced in 2004 as a first-generation model as BMW’s smallest, entry-level lineup. In Europe the car is sold in three- and five-door hatchback iterations, along with coupe and convertible models. That makes it an important volume model for the company there.

Here, the 1-Series is sold as a two-door in small numbers. It’ll be interesting to see if BMW produces a four-door sedan model in the future for sale in the United States. Rival Audi is ramping up its efforts with the A1, announcing it will be producing a traditional sedan for the first time. The 1-Series starts off with a markedly different appearance. The previous car was styled under Chris Bangle, but the new model follows BMW’s recent design direction. The look is more classic and comes across as less technologically-oriented than the previous generation car. The front headlights are enlarged and angular, looking most similar to the BMW 5-Series Gran Turismo.

The new 1-Series has taken some flack around the internet for its (admittedly polarizing) styling. We actually like it though, thinking it is a nice update that cuts a strong profile for BMW in the segment.

Inside, the 1-Series aims to get a dose of added style. German cars are known for their stoic cabins, but the 1-Series has nice contrasting shapes, colors and textures. The central stack is also canted toward the driver like BMW’s of old. It is a welcome change. 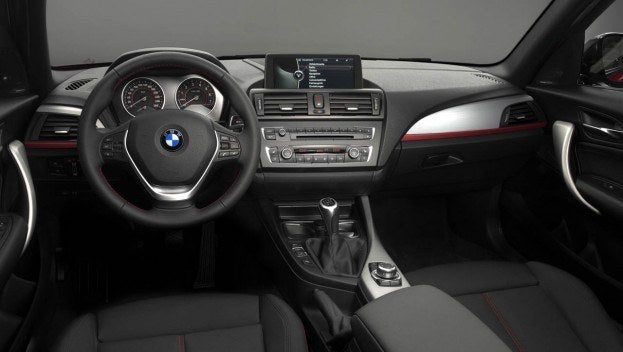 The 1-Series is unique for its rear-wheel drive layout, the only car in its segment. Its quite interesting that a five-door hatchback would be rear-wheel drive, and that layout gives it naturally impressive driving dynamics.

Buyers will have the choice of rowing their own gears with a six-speed manual or choosing an optional eight-speed automatic. Each 1-Series model designation will be available in Urban and Sport trim levels that tweak the car’ styling. There is no word yet on which models of the 1-Series will be coming to the U.S. Stay tuned for more details, and until then check our extensive gallery of the car below.