Good auto companies stride to insure their workforce is staffed with car lovers. Admiring the present day creations of motorized vehicles, employees with an interest in automobiles will also be faithful to the spirit and history of a powerful market brand. German automaker BMW is foremost aware of the company existing today after a shaky entrance into the auto industry in 1928. Originally building vehicles based on a licensing deal from British company Austin, BMW quickly developed their own range of vehicles that included a sports roadster.

Developed in 1936, the BMW 328 roadster became the German company’s first source of recognition. A stellar performer capable of speed up to 93 miles per hour, the BMW 328 sports car also kicked off a proud motorsport heritage. In 1938, a BMW 328 roadster competed and won the prestigious but also very dangerous Mille Miglia race in Italy. Built to commemorate the 75th year anniversary since the milestone BMW 328 entered production, the world-topping premium auto company has brought that vehicle to life again through a modern-day interpretation called the BMW 328 Hommage.

A tribute show car, the BMW 328 Hommage is more than a simple replication of the 1930s sports car. BMW engineers and designers exercised 21st century conventions on recreating the spirit of the race car that won the 1938 Mille Miglia. Considerably lower profile look than the original roadster, the 328 Hommage concept basic lines romances the current Z4 production car. The round LED headlamps and two-piece large diameter light alloy wheels complete a modern exterior presentation. Largely just a dream material in 1930s vehicle construction, carbon-reinforced polymers is extensively used by the current BMW engineers in the composition of the 328 Hommage roadster. The absence of door and passenger entry doors is another weight-saving design aspect that actually works well to the retro roadster look. As a whole, the BMW 328 Hommage structured with composite materials exhibits only 780 kilograms (1719 pounds) of total weight.

Inside the BMW 328 Hommage show car is one of the most bare-basic interior designs a two-seat roadster can feature. Warmly coloured in two-tone black and dark beige touched with a healthy use of aluminum trim, the 328 Hommage practices the same lightweight, open-air look as the original BMW design inspiration. Instead of a lavish in-car entertainment and technology assortment, the BMW 328 Hommage’s uses two Apple iPhones. Portable yet function, the iPhones serve as both stopwatches and GPS navigation located on the passenger/co-pilot side of the 328 Hommage’s dash. 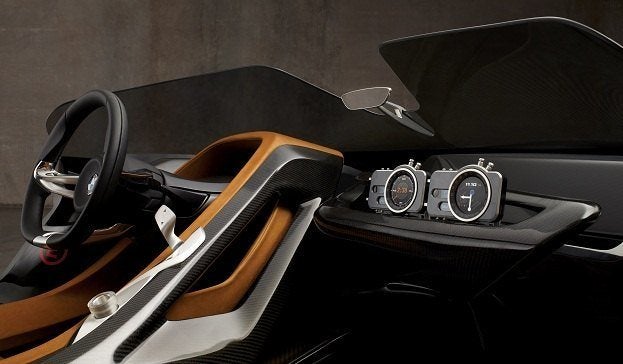 A three-liter inline six-cylinder engine rests behind the trademark BMW double kidney grille. Though detailed performance specifications for the engine or the BMW 328 Hommage was left to the imagination, the powerplant seems similar to the production-based BMW engine producing between 230 to 255 horsepower in the 2011 Z4 and 3 Series models. Since the BMW 328 Hommage is just a little bit more than half the weight of a BMW 3 Series coupe, this show vehicle would certainly deliver serious acceleration.

A precursor to auto racing success with the BMW 2002, BMW M3 and later the 24-Hour of Le Mans overall-winning BMW V-12 LMR prototype sports car, the 1938 BMW 328 achievement is asserted as pivotal by the CEO of BMW Group Classic department Karl Bäumer. “They created an icon, which is considered a milestone in the history of the automobile.” Retelling the story of the Mille Miglia victor with modern technology, BMW establishes a theme that transcends time.