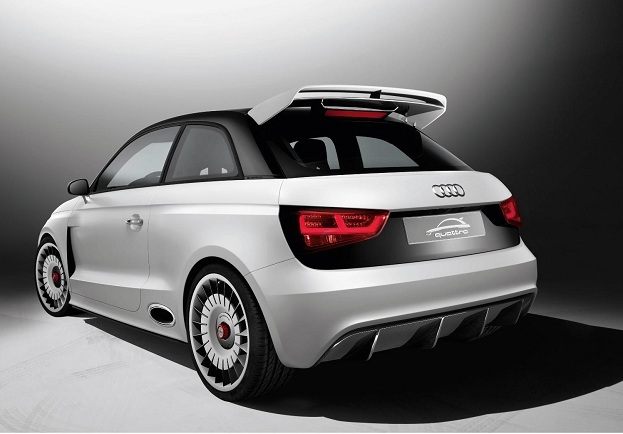 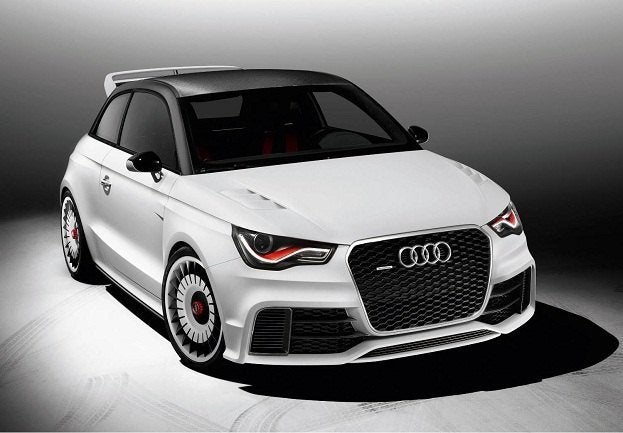 North American automotive customers would be largely unfamiliar with a more compact number than the Audi A3. Based on Volkswagen’s B-segment Polo, the A1 is more than 14 inches shorter in overall length than the Audi brand’s smallest North American offering. Introduced just late in 2010 to attract members of the growing compact premium car crowd, Audi has been swift in presenting the A1 with the best features the German luxury carmaker presents in their larger cars like the A4 or even the new A7 Sportback. An extreme makeover of their small entry-level vehicle, Audi is unveiling the A1 clubsport quattro for an Austrian-based Volkswagen gathering at Wörtherseetour.

Creating the Audi A1 clubsport quattro, the German auto company shoehorned the 2.5 liter TFSI five-cylinder powerplant currently used in the Audi TT RS. Optimized for performance beyond the reaches of current production specifications, Audi has enhanced the turbocharger and intercooler to produce 503 PS (roughly 496 horsepower). Comparing to the 2011 Audi A1 line-up, the 2.5 liter TFSI engine in the clubsport quattro version sees a 314 horsepower advantage over the most powerful power plant. Infusing expertise from the Audi’s DTM series program, the A1 clubsport quattro’s exhaust flows out of well-positioned side pipes. A six-speed manual transmission, carbon-ceramic brakes and quattro all-wheel drive accompanies the Audi A1 clubsport’s awesome powertrain.

The Audi A1 clubsport quattro marries a series of exterior add-ons and modification to the traditional B-segment car. Carbon-reinforced polymer materials are used liberally by German engineers creating a blackened roof and front air outlets. A large roof spoiler complements the A1 clubsport quattro width expanded by 60 millimeters (2.36 inches).

Appointed to the zenith of sport compact and racing aesthetics, the Audi A1 clubsport quattro is given a basic ‘right-to business’ look as a performance car. Trimmed with genuine carbon fiber and fine quality leather, the racing bucket seats found in the clubsport show car are transplanted from the Audi R8 GT. The performance-oriented concept car foregoes electronic amenities but adds racing-styled rocker switches and four-point front seatbelts.

Electronically limited to 155 miles per hour, projected performance of the Audi A1 clubsport is said to feature lightning fast flashes of acceleration. In only 3.7 seconds, the modified Audi A1 can launch from 0 to 62 miles per hour. Using Audi’s estimates, it is very likely to see this subcompact outrun exotic cars such as the Lexus LFA or a Porsche 911 GT3 RS 4.0. Acceleration from 0 to 124 miles per hour can be accomplished in 10.9 seconds with the 496-horsepower Audi A1 clubsport quattro.

The Audi A1 clubsport quattro is yet another tease to North American auto enthusiasts unable to simply identify with the base subcompact car. Perhaps we can take some solace in the realization that the physical Audi A1 clubsport quattro will be further out of reach of the worldwide small car performance buffs. The German automaker has no plans on taking the vehicle beyond show car presentation (at least in the real world). In the virtual world, the Audi A1 clubsport quattro can be experienced by anyone with a computer and internet connection. A playable vehicle on Need for Speed World (world.needforspeed.com), the situated performance sensation would probably be responsible for the wearing-out of many keyboards and other computer peripherals. 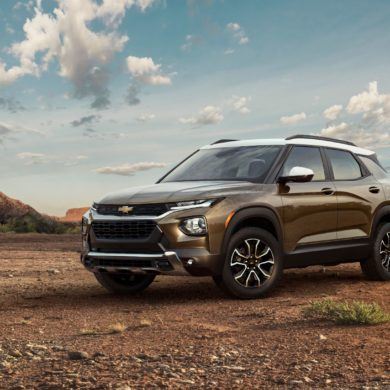