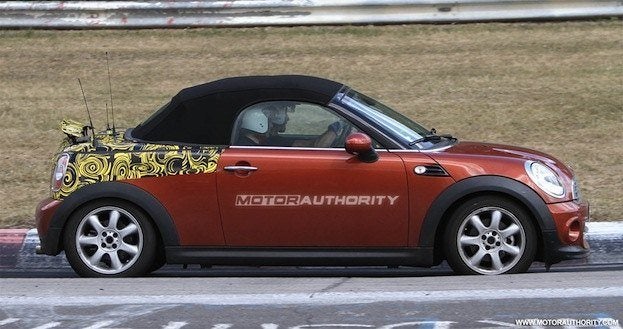 According to Motor Authority, and many others, the upcoming Mini Speedster (or is that the Roadster?) is going to have a manually operated soft top. This, if true, and all sources are pointing to spy photos such as the one shown here to bolster their claims, breaks with the current convention of all convertible tops being power operated these days.

There are a bunch of questions this brings up, but the most salient to me is, is this a good thing? 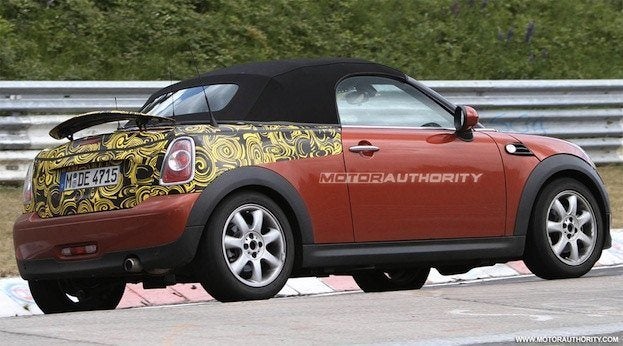 I just happen to own a convertible with a manual top. In addition to that, I live in an area of the world that has, at best, iffy weather. There are more than a few times that I have considered the efficacy of the latest Miata (okay, MX-5) with its power retractable hardtop (or PRHT as Mazda refers to it). It only adds 70 pounds to the all up weight of the car, and, at the touch of a button, got from fully retracted, to all they way up in a scant 22 seconds. Or, if you think about it, as much time as you spend sitting at a red light when it starts to rain.

So why not have that on every convertible made, and why not have a power retractable hardtop on the upcoming Mini Speedster (or Roadster)? The ‘why not’ end of this question is a simple one-word answer: weight. Weight, as we all know, is the enemy of performance. And weight, even seemingly small amounts of it come across as being a big penalty in a small car like a Mini. Yes, the current Mini tips the scales at 2600 pounds (give or take) which is about a thousand pounds more than the original, but in today’s world, that’s not very much. 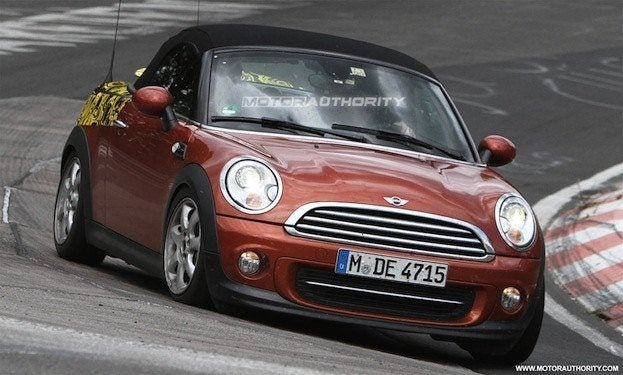 So ‘why’? Well of course you get a performance advantage. Less weight equals better performance. And having a manual top versus a power folding top keeps what weight you are carrying around in the car down low. You also save on complexity. Power tops are neat and convenient and all that, but they are complex pieces of kit. Lots of hinges and panels and wiring and cabling and other pieces of substructure that have to be aligned just so to function properly. And function properly not only means getting the top up and down, but also sealing out the weather when the thing is up. No, I’ve never lived with power top personally (although an uncle did have a Ford Skyliner), but you don’t have to be Nikola Tesla to figure out that if something goes wrong, a power top is going to be a real pain in the ass and the wallet when something goes wrong. 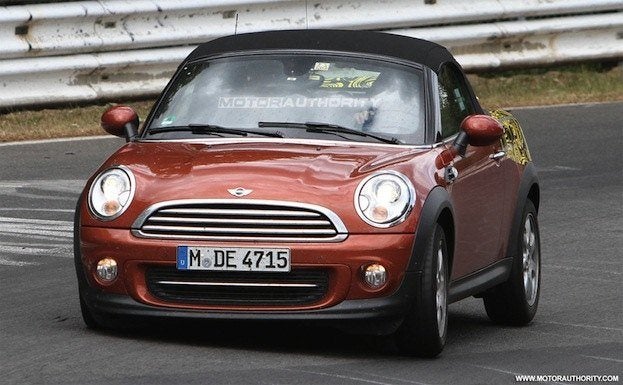 Also, having a manual top puts you, the driver, in much more personal contact with your car. Having a manual top instead of a power one is sort of like washing your car yourself, versus running it through a car wash. Every time you drop the top or raise it, you get direct, hands on experience with how your car is doing. Not only will you be paying a lot of attention to the top itself, you will also notice things around it – dents, dings and stuff along those lines. Plus, it also get you up off of you lazy American ass and gets you some (if only a little) exercise.

There are a lot of plusses to Mini going with a manual top for this upcoming model. Now, whether Mini should be even making this model is another question entirely. You know, brand dilution, spreading your company too thin and all that, but those are questions for another time. 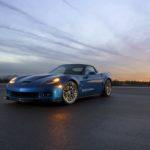