Tesla Rolls Past Six Clicks, So What? 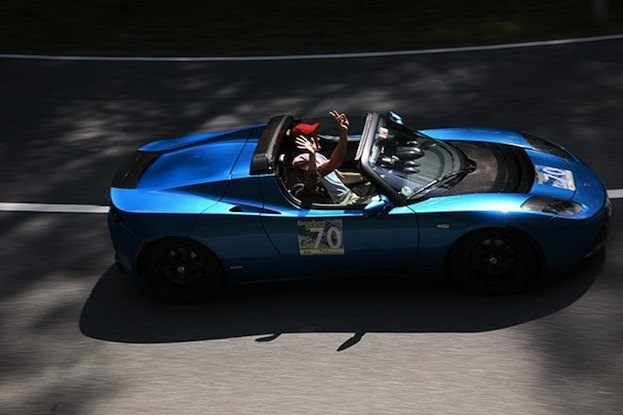 So, according to Chuck Squatriglia over at Wired’s Autopia, a guy that owns a Tesla roadster has just rolled the odo. past 100-thousand. And that’s clicks (Kilometers), by the way. On the one hand, there’s a lot for your typical lunk-skulled gearhead to whine about, but there’s another, bigger level here: So what?

We are going to have to deal with electric cars. Period.

Let me say that one more time: We are going to have to deal with electric cars.

No amount of droning and bitching and moaning, no amount of wishful thinking is going to let us (i.e. humans) keep producing cars of the “efficiency” of a built 1968 GTX by the tens of thousands.

There are many, and on some days, I am one of them, that this is a terrible loss not just for the people who are in to cars, but also humanity in general. That might be the case. But it is also the undeniable fact that designing, building, manufacturing, owning, running, maintaining and disposing of vehicles like that (even their modern equivalents) is going to become so astronomically expensive (in terms of money, enviro impact, morality, etc.) that we are going to be driving alternatives.

In other words: If you’re a gearhead, then you’re going to have to learn to live with electric cars.

That is why it is important to note that this fellow, Hansjörg von Gemmingen has just rolled over the big 100 (yes, even if it is in 100-thousand of those diabolical, socialist metric system thingos (why next thing you know, they’ll start measuring Mustang engines using the metric system!)).

“But, but … ” you’ll hear the knuckle-dragging stupes sputter before launching into some screed about how this is demeaning, not only to our societal system, but to us as free and thinking individuals. They’ll start losing it and will start mawkishly going on about “basic market principles” and “our God-given rights” to own something that weighs 5300 pounds at the curb (or should I say kerb?), ready to drive down to the track for the day, loaded with coolers and beer and your stash and 3 of your buddies and two new girls, burning about 5 gallons of dino-juice for every mile your lead right foot commands it to cover.

That is going away, more than anything else, due to the fact that we’re running out of gas, and we’re finally starting to deal with the fact that automotive transportation is far dirtier than we can efficiently deal with.

And yes, I mean that it will both make things worse for the planet (due to our demonstrably foolish short term profit thinking more than anything else) and make it worse for car guys.

In the first instance, because that sort of willful intransigence won’t go over well with the billion people (give or take) displaced by rising sea levels, and only make those environmental impacts worse, but in the second instance, the more we dig in our heals and deny the actual scientific facts on the ground, the more fuel it will give to those who hate cars with a white hot passion.

I know car guys out there that look upon rides like the Tesla Roadster as some sort of automotive option designed by Torquemada (look it up, meathead). If you listen to them, you think that if we don’t dig in our heals, next thing you know, Al Gore and Ed Begley Jr. will be at our front doors and forcing us at bayonet point to drive abominations like the Tesla Roadster. No, that won’t happen. If we decide to make out Custerian stand here, now, at this moment, in this place, we will eventually have to deal with people who look at folks like Al Gore and Ed Begley Jr. as right-leaning hacks. And those people, the people who succeed fairly benign individuals such as Gore, Bagley et al, those people will end up making sure that if we can afford to buy a car at all, it will be an electrified version of a Tata Nano with a $94,000 sticker and a top speed limited to 34 MPH.

In other words: We all better learn to love cars like the Tesla Roadster, and figure out how to make them cheaper, better, and most of all, faster. We can either be part of the solution, or we will be perceived as being part of the problem. Then marginalized. Then ignored. And then have cars that would make a Parisian laugh shoved down our throats.

And, apart from price, there is a lot to love about Tesla Roadsters.

These things are q-u-i-c-k quick. They have a ton of torque and grip about as good as any Colin Chapman (i.e. Lotus) chassis does. I talked with a guy at a Sunbeam Tiger auto-cross once. He owned not only a Tiger, but also a Tesla Roadster, and he said, without hesitation or equivocation that the Tesla was a much quicker car and a better auto-crosser.

What, you can’t monkey under the hood? Have you ever played around with slot cars? Teslas are essentially huge slot cars, so have it boys and girls. Didn’t most of us start out as kids (usually) with dads that messed around with drag cars or dirt bikes or karts or some such? Gearheads, car nuts, grease monkeys and etc. can, and will hot-rod anything and then we’ll go have fun with them. When we were kids, how many of us would build and race some sort of un-sanctioned soapbox cars? Raise your hands! Yup, thought so.

Same thing applies here: Get into electric cars and learn how to hop them up. The future is bearing down on us, one second at a time, so we better be prepared to make it ours as much as we can.