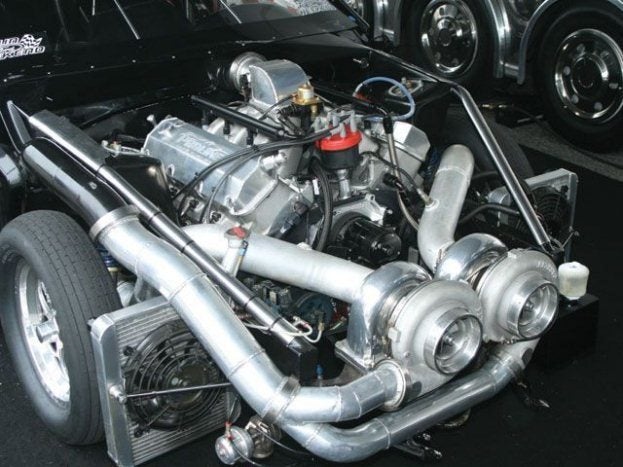 There are many opinions regarding the use of superchargers and turbochargers in performance vehicles. Many think that it’s a “replacement for displacement,” and shun it off as simply another “Get fast quick” scheme; throwing it the way of Nitrous Oxide. Others believe it’s more than that, and is a great way to get as much power out of the car as possible, while keeping the weight of the car low.

Although you might be hard pressed to find an American carmaker put a factory turbo in place of a bigger engine on a muscle car, foreign manufacturers have been using forced induction on cars for years. There are exceptions, of course. In the 80’s, for example, Ford slapped a turbocharger on a 2.3-liter inline-four and called it the Mustang SVO. In the 90’s and early 2000’s, Pontiac’s high-performance Grand Prix was called the GTP, and featured a 3.8-liter Supercharged V6. When it wasn’t in the shop, that bad boy pushed out up to 260 horsepower. Today, even Cadillac is getting in on forced induction by putting a supercharger on their ultra-powerful CTS-V, which boasts 556 horsepower from its 6.2-liter V8.

So clearly nowadays it’s more excepted to use these methods to increase power, but let’s look at the 90’s, when a Japan vs. USA sports car war was clearly in effect. Japan came out with some excellent road-scorchers, each equipped with twin-turbos – the Mitsubishi 3000GT VR-4, Nissan 300ZX TT, Toyota Supra TT, and the Mazda RX-7 TT. Meanwhile, American carmakers were coming out with equally powerful sports cars, but instead of fitting them with turbochargers, they beefed up the size of the engines to large displacements. This brought us the Chevy Corvette, Ford Mustang GT, Chevy Camaro Z28, and Dodge Viper. Each camp has their supporters, some of them diehard, but opinions and preferences aside, is one method better than another?

It all depends on how you look at it. Forced induction is inherently more efficient, considering a smaller engine is used, which keeps weight down and fuel economy up. During normal driving it can act as like a regular 3.0-liter engine but when pushed, can put out the power of a 4-liter monster. Large displacement engines, on the other hand, have fewer moving parts and are – at least in theory – less likely to cause issues. In terms of power delivery, big engines can produce gobs of torque from the beginning and a fairly even power band. Turbo’d engines, however, need to wait for the turbos to spool before producing huge power. Small turbos don’t take as long to spool, but don’t produce much power, either. Big turbos are the exact opposite.

So is there a better method to producing lots of power? Not at all. It’s all about personal preference. I own a Nissan 300ZX TT and love it, but I do miss the instant throttle response and punchiness of a good V8.

Then again, you could always go all the way and have both. The Koenigsegg CCX, for example, has 4.7-liter, twin-supercharged V8. The Bugatti Veyron, a quad-turbocharged, 8.0-liter W16. And don’t forget our own GM – the Corvette ZR1 and Cadillac CTS-V has a 6.2-liter, supercharged V8.