With the Lamborghini Murciélago LP 670-4 Super Veloce out of production last November and the Aventador set to be revealed at the Geneva Motor show, you might have thought you heard the last of the Murcielago.

But as it turns out, that isn’t the case. If any tuning company can bring the Murcielago back into the limelight, its Edo Competition. The company set their sights on the LP640 before, over a year and a half ago when it produced the fastest Murcielago in the world. Now the German tuner is setting its sights on the car one last time, offering up the LP750.

The modifications start where the previous car left off. Last time, Edo’s worked over LP640 produced 710 horsepower and 516 pound feet of torque. Those figures were good enough for a top speed of 219 mph at the Papenburg test track. That is a record that has yet to be broken. 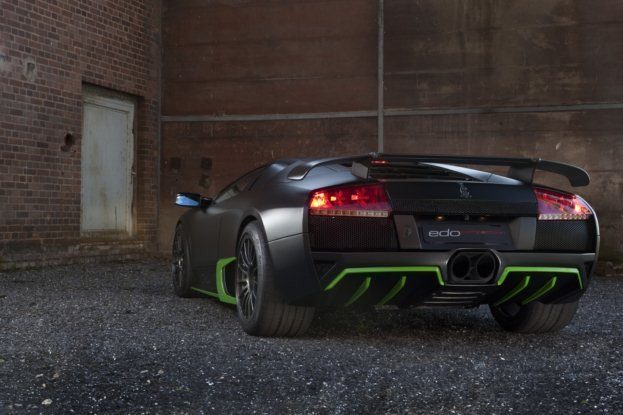 A new aerodynamics package and redesigned rear wing hint at the changes underneath with the LP750. It looks quite mean with its black and green exterior finish that isn’t over the top.

To wring the extra 110 horsepower over the standard car’s 6.5-liter V-12, Edo installed a high-flow airbox and reengineered cylinder heads, while adding a laundry list of components developed from the ground up for use in this car. They include high performance exhaust headers, high flow catalytic converters, more aggressive camshafts, bucket tappets, mufflers, exhaust tips and high flow air filters.

To boot, Edo offers the ability to convert the car from its standard all-wheel drive setup to rear-wheel drive. Doing so offers a weight savings of 88 pounds. With all that power though, we think we’d stick with the all-wheel drive system. Modifications will take place in Ahlen Germany, where Edo Competition is located.