As automakers develop vehicles to the increasingly more stringent fuel economy standards of the EPA and other organizations, advances in powertrain and management systems have led to some of the first real gains in overall production car efficiency. Establishing balance within vehicle performance and customer demands, manufacturers are unable to fully exploit much of the emerged technologies for optimal fuel economy. Continuing on the path blazed by the company’s Up! concept cars exhibited from 2007 through to 2010, Volkswagen latest concept vehicle is the latest exploration into low-emission, high-efficiency driving. The Volkswagen XL1 has been unveiled at this past January’s Qatar Motor Show displaying the German-based auto company’s drive for using lightweight, aerodynamics and carefully moderated performance.

Composed in a carbon reinforced polymer body shell assembled with the aid of a process called advanced Resin Transfer Moulding, the space age exterior styling of the Volkswagen XL1 achieves a unique identity within a streamlined design. Given a hyper-aerodynamic contour within a subcompact 153.1 inch total length, a low roof line distinguishes the Volkswagen XL1 with a sports car grace. the XL1 concept’s drag coefficient is only 0.186 eclipsing the production car record holding General Motors EV1. Given a smooth, uncomplicated look, aerodynamic efficiency is achieved with full, rear fender skirting over the back wheels. Weighing 795 kilograms (roughly 1,753 pounds), the Volkswagen XL1 tips the scale with less force than a Smart Fortwo. Additionally promoting energy conservation along the front, a LED lighting provides bright illumination.

Little can be said about the Volkswagen XL1’s interior other than fact it shows no signs of compromising comfort and refinement. Simple in composure, the two-seat cabin features fully-functional controls and small door-mounted LCD screens projecting side video camera images taking the place of the side mirrors. 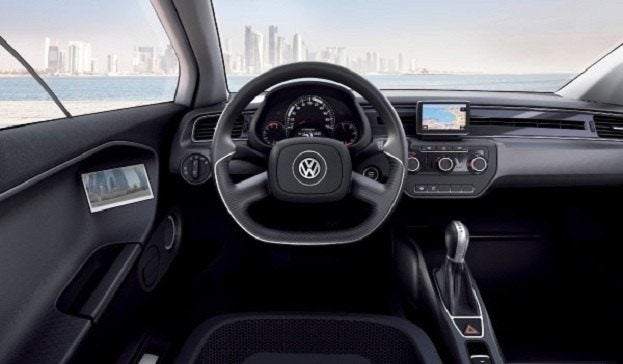 The first plug-in hybrid from their recent release of super high fuel mileage concept vehicles, the Volkswagen XL1 concept runs primarily off a lithium-ion battery pack supplying a 20-kilowatt electric motor. Designed to be charged from household circuit, the electric only driving distance performs for 35 kilometers (21.75 miles) of zero emissions motoring. After the lithium-ion battery is exhausted, the Volkswagen XL1’s super-small TDI engine takes over providing around 48 horsepower. A merger two-cylinder, 0.8 liters in displacement, the Volkswagen common rail turbodiesel powerplant is essentially ½ of a four-cylinder engine found on the European-equipped Golf. The second time a 0.8 liter TDI engine is seen on a Volkswagen design study, the XL1 follows last year’s Up! Lite concept.

Combining a diesel engine with electric power, the Up! Lite and the new XL1 are differs in execution as the former is a fuel-burning vehicle using electric power assistance. Much in the way the Volkswagen XL1’s engine borrows technology from current production cars, a 7-speed dual-clutch transmission (known by Volkswagen as a DSG) applies the company’s lessons of the 6-speed DSG transmission currently sold on vehicles such as the Jetta and the 2012 Passat.

The result of the Volkswagen XL1’s strides in engineering amounts to city car performance unequal to any current production vehicle. Through the combination of the lithium-ion battery and the turbodiesel engine being fed by a 2.64 gallon fuel tank, maximum travel inside the Volkswagen XL1 reaches 341.75 miles. Based on basic estimates, the Volkswagen XL1 concept fuel economy strides to 129 miles per gallon in ideal, projected driving. According to Volkswagen, the XL1’s fuel consumption is 0.9 liters per 100 kilometer range using NEDC calculations. 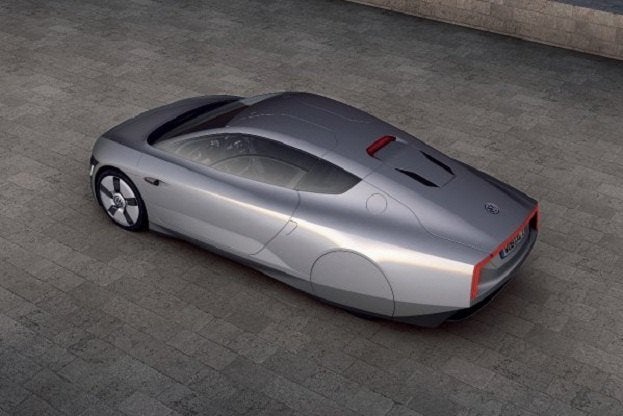 Most important in European markets, the carbon dioxide (CO2) emissions of the XL1 concept car is kept super-low thanks to almost 22 miles of electric-only driving. Pairing with a 0.8 liter TDI engine, the Volkswagen XL1 plug-in hybrid emits just 24 grams per kilometer (comparing to roughly 1/3 that of the lowest CO2 emitting vehicles).

Like the UP! Concept cars, Volkswagen has no intentions to produce the XL1 but rather chose to exhibit how technology can combine into a super fuel efficient platform.