Under the leadership of David Richards, Aston Martin has deployed one of the most diverse lineups in the company’s 97-year history. Granting the fact that the British sports car builder largely consisted of a single-car lineup until recently, the new luxury car world is as much about product variety as it is about providing a fulfilling premium riding experience.

Adding the four-door Aston Martin Rapide in 2010 as the company’s largest current offering, the sports car manufacturer has ventured the other way on the size spectrum with a 2010 Geneva Motor Show concept.

Indulging spectators with a luxury microcar concept called the Cygnet, Aston Martin has since confirmed a production version of this vehicle. Set for a 2012 debut, the Aston Martin Cygnet will first be presented with two special edition models; a Cygnet Launch Edition Black and a Launch Edition White trim. 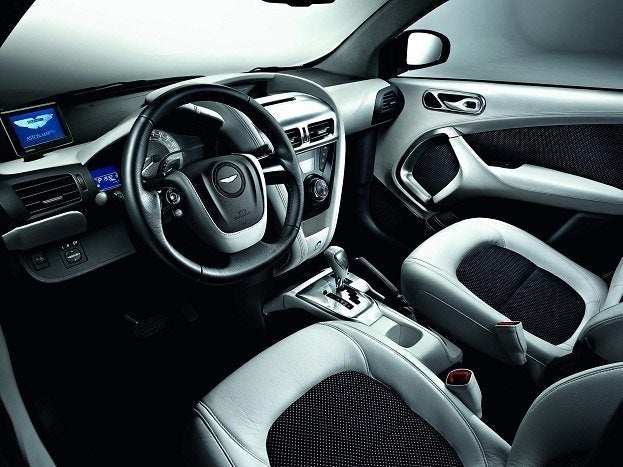 Providing a polar opposite to the Launch Edition Black in colour, the Aston Martin Cygnet Launch Edition White contrasts with a Snow White paint. Matching with the white bodywork, the Cygnet rides on diamond-turned alloy wheels. The silver grille mesh and satin twin striping stands out from the clean exterior. Hand trimmed seats in Pearl white leather combine with Alcantara inserts perforated for air flow.

When released, its easy to declare the Cygnet city car will be the most fuel efficient Aston Martin ever produced. To be sold with a CVT or 6-speed manual transmission, the Cygnet is predicted to provide up to 56.5 miles per gallon fuel economy (according to European fuel economy measurements) from a 1.3 liter engine. A super efficient model, the Launch Edition is a prelude to the Aston Martin Cygnet’s extensive luxury equipment. Premium features such as 9 airbags, satellite navigation system and heated seats available in the two-seat cabin. Interior design is also high-end as the Cygnet invokes much of the same performance driving appeal found in Aston Martin traditional sports car.

Having not announced plans for bringing the Cygnet to North America, the Aston Martin city car goes on sales for a £30,995 starting price in the United Kingdom. In comparison, the Cygnet will sell for less than 1/3 the price of a 2011 Aston Martin V8 Vantage.

Despite Aston Martin’s best attempts to authentically harness their luxury into a micro car, the European launch of the Cygnet will determine if Aston Martin’s city car will be accepted as either a forgettable extension of a famous luxury brand or a chance to change perception of finer motoring. All the same, can you imagine James Bond driving a Cygnet?